The 50th edition of the Presidential Tour of Turkey is currently in progress and Adam Phelan, of Australia’s only ProContinental team Drapac Professional Cycling, is writing daily reports for CyclingTips from within the race. Here’s Adam report from stage 3.

It didn’t take long for the attacks to begin. Like a machine gun riders flew off the front in a continuous wave. Stage 3 was the first day of this year’s race in which the sprinters’ teams would not control the peloton.

We rode into a headwind, hampering most of the attempts at a breakaway. But it didn’t stop the attacks. One after another they went. There were a few breaks that got a decent gap, notably a large group which had my teammate Wes Sulzberger in it. But much like the others before it, it got reeled in.

It wasn’t until about 70km into the stage, just over the top of the first climb, that a break was finally let go. It was a tough start. Two more Category 1 climbs awaited us in the 185km stage.

The main, middle climb started off comfortably enough. The majority of the sprinters were still floating around the bunch. Then MTN-Qhuebka hit the front in the final few kilometres of the climb. Suddenly gaps ripped open all through the peloton as riders’ legs began to fade. Thankfully I felt pretty good on the climb and was able to stay with the lead group without too much trouble.

Along the flat section before the final climb the wind made it uncomfortable in the small bunch. Through one of the towns there was a crash which featured the majority of the Caja Rural team. I just missed it, thank god!

The last climb was 10km. I would soon find out that 10km can be very long. Astana rode into the climb fast as I hung on to the bunch as the road began to ascend. Riders dropped off the back as the pace continued to rise. I hung on — just. I was then yo-yoing on the back of the group of 20. There was another 5-6km to go. I lost the wheel in front. I couldn’t find enough oxygen. This climbing stuff hurt.

I was then on my own, suffering and hoping the climb would hurry up and finish. Of course, the hardest part was yet to come. With 3km to go the road got steep. My tyres felt like glue and I was pedalling triangles. Surely I had another gear.

With 2km to go I felt like I was drowning. Two kilometres. It felt like a lifetime. I finally crossed the line and was left hung over my bike. Spectators grabbed bottles from my bidon cages. I was too tired to move. I ended up 25th. The stage was more than five and a half hours long, 183km and had 4,000m of climbing. No wonder I was stuffed! We quickly jumped into the race van and consumed anything we could set our eyes on. You can not eat enough on stages like that.

We then had an 80km transfer to our next hotel. The drive was a blur. Once we got to the hotel we were greeted with paradise. This hotel/resort is ridiculous. There are water slides into the lake, theatres, seven restaurants, four pools and god knows what else. If only I was here for a holiday.

Tomorrow looks to be another good stage with a few lumps to keep things interesting. Maybe a good day for a breakaway. I think there will be a few riders thinking the same.

I’ll let you know how it goes. 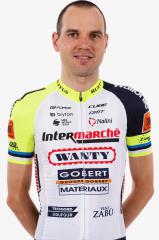