On the same finish where he soloed to win the 2012 world road title, Philippe Gilbert put in a vicious attack the fourth and final time up the Cauberg to take his third win of the 49th edition of the 251.4-kilometer Amstel Gold race.

Holland’s biggest race had been carnage with several big names crashing out during the early parts of the day. Geraint Thomas (Sky), Dan Martin (Garmin-Sharp) and Joaquim Rodriguez (Katusha) all DNF’d as a result of crashes on the tough course with 34 climbs.

10 riders had attacked and stayed away soon after start in Maastricht, and their gap made it’s way to almost 15 minutes by the time they hit the Cauberg for the first of four times. It was only when several teams began their chase that the gap began to dwindle, and the leader’s gap had more than halved when the pace lifted 50km from the finish (see video of final 50km here).

The relentless pace of the peloton ensured that everything came back together in the last 8km and with a tailwind up the Cauberg it was the favorites who came to the front and attacked at the bottom of the final ascent of the Cauberg.

Gilbert’s teammate Samuel Sanchez had kicked things off on the iconic Cauberg climb, but when he wilted Gilbert was perfectly positioned to fire off the front and passed Simon Gerrans and Alejandro Valverde as he powered over the summit. Gilbert then pressed home his advantage on the 1.8km section where he sat up in the final 50m and savoured his victory by two seconds.

Jelle Vanendert (Lotto Belisol) made it a Belgian 1-2 in Holland, while Simon Gerrans (Orica-GreenEDGE) rounded out the podium in third.

“This was a particularly emotional win for me,” Gilbert said. “My wife and my kids were here for the first time in two years. So to win will be something they will never forget. I have been dreaming of this.”

Asked whether he might win all three Ardennes classics – the Amstel Gold Race, La Flèche Wallonne and Liège-Bastogne-Liège – as he did in 2011, Gilbert said: “I have started well in any case. It would be fantastic…but for now I’m just enjoying this.” 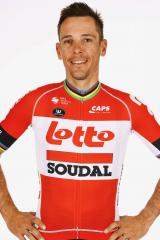 Team presentation in the city square at Maastricht, Netherlands.

One of the pre-race favorites before Amstel Gold, Simon Gerrans.

Frank Schleck being interviewed before the start.

The peloton cruising through Holland.

The 10 rider breakaway who managed to get away from the start and build up a maximum advantage of 15 minutes.

So much for the new UCI rule about not being allowed on footpaths.

Cyclo-mad cafe at the base of the Cauberg.

The breakaway group on the Loorberg.

The peloton riding up the Gulperberg (max 19%)

The peloton riding up the Gulperberg.

Davide Rebellin (CCC Polsat Polkowice) was the oldest rider of the race. He won Amstel Gold Race ten years ago in 2004 and dominated the Ardennes Classics, only to be caught for doping (CERA) in 2009.

Christophe Riblon and the breakaway group leading the race up the Gulperberg. Christophe would later get the combativity price for the day.

Michal Kwiatkowski (OPQS) was a pre-race favorite and led OPQS for the day.

Pim Ligthart (Lotto-Belisol) with the breakaway group on the Loorberg.

Japanese champion Yukiya Arashiro going back to the team car for a feed.

The peloton on the Camerig climb.

Gilbert maintains a gap with Gerrans and Valverde in sight

50m before the finish Gilbert was able to celebrate his third Amstel Gold Race victory.

Michael Matthews was pipped for the win at Brabantse Pijl by Gilbert last Wednesday. Matthews came in a very respectable 12th place at Amstel Gold.

Simon Gerrans at the finish line with a split lip.

A big smile from Philippe Gilbert along with BMC’s press officer Georges Luchinger.

Philippe Gilbert with his son Allan celebrating his win.

Jelle Vanendert, Philippe Gilbert and Simon Gerrans on the podium.