On Friday and Saturday riders in the women’s peloton contested two races in ‘s-Heerenhoek, The Netherlands, as part of the 2014 EPZ Omloop van Borsele: a 20km ITT and a 120km road race. In this post, Australian sprinter Chloe Hosking (Hitec Products) talks us through her victory in the road race and why winning this particular race means so much to her.

In 2009 I got off a plane in Amsterdam and had no idea what to expect, who I was meeting, or what I was getting myself into.

Walking out of the baggage claim area with my suitcase and bike bag – packed for seven months and bursting at the seams – I saw a little old man, greying hair, glasses, big smile, jeans and a smart sweater waving at me. “That must be Harrie,” I thought to myself.

Through a friend in Australia I had been put in contact with Martine Bras (a former rider at Boels-Dolmans) and Martine had in turn put me contact with Chris Rouw and Harrie van de Horst; the two men who run the Dutch club team I subsequently organised to race with for the 2009 season.

Three days after getting off the plane in Amsterdam I jumped in Harrie’s little green car, along with two other girls who were staying with him, and drove to the start of my first ever race in Europe, Omloop van Borsele.

From the very beginning the team was great. As soon as I arrived at the race they were full of advice and knowledge — two things so crucial in Dutch racing.

One of the long-term members of the team, Linda Ringlever, talked to me about the peloton and what to expect. “It’s like a washing machine — it goes around and around so you just need to make sure you keep moving and getting back to the front”.

Harrie, who I soon came to refer to as “the weather man”, warned me about the wind. “It’s blowing from this direction so make sure you’re at the front here,” he said pointing out specific sections on the race map.

And Chris knew every bend in the road, every left-hand corner, right-hand turn. He knew every narrow road, and every important part of any race we did the whole season. He told me that day what I have told everyone I have raced Omloop van Borsele with since: “make sure you’re at the front and on the right-hand side at 3km because there is a tight, 180-degree corner.”

With all this information floating around in my head I rolled to the start line decked out in my new black, white and pink Moving Ladies team kit. In front of me stood riders from Cervelo, Flexpoint, DSB – riders like Kirsten Wild, Iris Slappendal and Marianne Vos – but I had no idea who they were.

The gun went and we were away. Some 120km later I had survived my first ever race in Europe. But not only survived, I had come fourth. It’s safe to say that was the beginning of my love affair with Dutch racing. Fast forward five years.

While in the scheme of things Omloop van Borsele is a small race, holding a meek 1.2 UCI ranking, for me it is one of the races I look forward to most throughout the season. It’s almost like I’m returning to my roots. And regardless of the ranking, it still draws an impressive field year in, year out boasting a winners list that includes the likes of Vos, Wild and Ellen van Dijk.

Driving to the start yesterday with my teammates — chauffeured by none other than my teammate Elisa Longo Borghini who was acting as ‘swannie’ for the day — I didn’t have high expectations for the race. Struggling with cramps in my last few races I’d been finding it difficult to finish off the last 20 or so kilometres and my confidence was a little shot.

But as the race started and the sprint for that 180-degree corner after 3km began I could feel that my legs wanted to play.

In the team meeting we’d discussed our plan. The wind was howling so our director opted for the KISS (keep it simple stupid) approach — just get as many girls in the front as possible before turning to me and saying, “Chloe, you’re captain on the road, you’ve done this race a lot. Is there anything you want to add?”

“Yep. The most important part of this race is the corner after 3km. There are always crashes and it’s goes straight on to a dijk after it.

“Stay on the right-hand side because girls on the left get squeezed,” my teammates were all ears and as we neared the corner at close to 50km/hr I had Lauren Kitchen and Audrey Cordon with me on the right.

I’m the first to admit that I talk a lot of rubbish. It’s a running joke in the team that the girls just nod and say ‘yes’ to me but when you see them there after you’ve given them advice it’s a good feeling. While they often laugh at me they also seem to listen.

As we rounded the corner safely the field immediately began to stretch in the crosswinds. A crash held a lot of the peloton up but all five of us had been in front — position is king in Dutch racing.

I jumped straight into the echelon and started rolling. At the Energiewacht Tour two weeks ago I had been caught out too many times trying to sit on the back and not roll through. In the end I just ended up in the gutter and working even harder to stay with the front group. I wasn’t going to make that mistake again.

While teams like Boels-Dolmans, Giant Shimano, Orica-AIS and Hitec were driving it in the winds the race — which was five laps of a 24km circuit — just wouldn’t split. As we tried to create an echelon for what felt like the hundredth time on the third lap time Ellen van Dijk rode past me and said bemused, “nobody wants it.”

Mel Hoskins from Orica-AIS said to me, “the wind’s not right, hey? It’ll be from a small group.” I think she had a crystal ball.

As we came past the finish line with one lap to go Specialized-Lululemon started launching their riders off the front. First Ally Stacher, then Loren Rowney, the Chantal Blaak. While they would establish small gaps nothing was gaining much time.

As we rode along the dijk for the last time things started to get serious. Wild was in the echelon drilling it which showed that Giant-Shimano meant business and the Rabo/Liv team were all grouped at the front.
Still the winds weren’t right to totally shatter the field.

Then all of a sudden I looked up and saw two riders off the front, both orange and black: Ellen van Dijk and Annemiek van Vleuten. Boels-Dolams and Rabo/Liv. Two more riders were trying to bridge up to them.

The pace had slowed significantly and I couldn’t understand why. Then I had a closer look. The entire Rabo/Liv team plus one Boels-Dolmans rider were blocking the narrow road. No-one could get through and the gap to the four riders in front was growing.

Oh this is bad.

Audrey and I were both stuck behind the wall of riders and as I yelled to Audrey to go I could see she just couldn’t get through. Somehow three or four riders managed to penetrate the wall. I suspect they used some cyclocross skills, and not surprisingly two of them were Australian mountain bikers, Peta Mullens and Gracie Elvin. The small group was off in hot pursuit of the four riders ahead.

With just over 15km to go I knew this was ‘the moment’. Looking to the right I saw some friendly looking grass and just went for it.

Power down, off road, I sprinted past the sea of Rabo/Liv riders and focused on bridging up to the escape group as quickly as possible. After 105km of racing you don’t want to be stuck in no-man’s-land for too long.

I got there but I had used a lot of energy. I tried to suck in as much air as possible and hide for as long as possible before the other girls in the breakaway started hassling me (and rightly so) to roll through.

With about 7km to go about six girls managed to bridge up to our group, including Wild and my teammate Audrey, swelling the group to 15 riders.

While a few girls tried to launch off the front in the final few kilometres it was all together as we flew under the 1km to go banner. I was nicely positioned on Wild’s wheel until things started to get a little tighter.

Audrey rode up to me at the perfect moment. Riding up on my left shoulder she said, “Chloe” and took me to the front. We were in the perfect position. The wind was blowing right to left so we were protected by the other riders. Audrey was able to keep lifting the pace until those who weren’t so keen on a bunch kick started to play their cards.

With about 800m to go Ellen van Dijk opted for the early sprint, something that suits her time-trialling ability, but Wild was directly on her wheel and I was directly on Wild’s wheel.

Ellen eased up and then Annemiek went. Wild chased and I was still glued to her. Then it was like everyone eased up. It was a headwind sprint and no-one wanted to pull the trigger too early.

Like a game of poker everyone waited. I didn’t want to go first. With just under 200m to go Wild launched. I was still tucked on to her wheel and as her speed started to falter I jumped out and came over her. Crossing the line first I clenched my fists and screamed. I had wanted to win this race ever since I came fourth in 2009.

Fittingly one of the first people to come to me as I celebrated with my teammates – hugging Audrey and Emilie probably too many times than is socially acceptable – was Chris. He gave me a big hug and said in his Dutch-English and with a big smile on his face, “this is your race!”

This year it was my race. And it felt good. 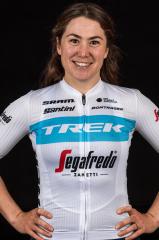 1
HOSKING Chloe Hitec Products
02:57:43
2
WILD Kirsten Team Giant-Shimano
00:00:00
3
VAN DIJK Ellen Boels - Dolmans Cycling Team
00:00:00
Full results →
This is an edited version of a post that first appeared at Chloe’s blog here. You can follow her on Twitter here and on Instagram here.

Click here to see more of our coverage of women’s cycling.