While most of the cycling world has been focused on the Cobbled Classics and Ardennes Classics in recent weeks, the cycling fans of Brittany in north west France had their own race to celebrate. Tro-Bro Léon is not a Monument, it’s not even a ‘classic’, but what the UCI1.1 race lacks in prestige it more than makes up for with character. Husband and wife team Jered and Ashley Gruber went to Tro-Bro Léon last weekend and send back the following story and photos from a race that really does deserve more attention.

They call Tro-Bro Léon the Petit Paris-Roubaix and L’Enfer de L’Ouest – the Hell of the West. The nicknames sound nice — it seems every great race needs a nickname — but Tro-Bro Léon doesn’t need the Roubaix comparisons. It’s a proud event that stands quite well on its own two feet.

There’s no comparison between the cobbles of northeastern France and the dirt farm paths of northwestern France and none should be attempted. The cobbles are the cobbles, they’re like nothing else. So too are the 25 secteurs of dirt — ribinoù — that define Tro-Bro Léon. The ribinoù are simple, just tiny farm paths that criss-cross fields and connect paved roads throughout the region. The are generally just two hard-packed pieces of dirt linked by a grassy median in the middle. Double-track.

The fields outside of Roubaix, with their ancient cobbled sectors in the middle of nowhere, seem lifeless when you compare them to Brittany, a region so steeped in culture and history. Legends and myths have sprung from its verdant landscape, and its own language and culture have not only survived the centuries, but continue to thrive.

The Bretons are a people apart, and their land is the same – perched far off in the north-western tip of France’s hexagon, unsheltered from the battering ram of the North Atlantic. Up until recent times Brittany was an independent realm, more British than French. The region is French now, so French is spoken and seen everywhere, but along with the modern language, the Celtic language, customs, music, and culture flourish.

Brittany is one of six Celtic nations: Brittany, Cornwall, Ireland, the Isle of Man, Scotland, and Wales. In other words, it’s not like the Roubaix’s Departement du Nord. Not even close.

Ashley and I promised each other we’d return to Tro-Bro Léon in 2014, but we nearly opted for Amstel Gold. No matter what we get from Tro-Bro Léon, it’s still not Philippe Gilbert, it’s still not the biggest riders. It’s somewhat hard to make a case to a team like Garmin-Sharp — whom we work for — that we’re going to shoot a small UCI1.1 race, ten hours from where the team will be on that Sunday. But we wanted to do something different.

Despite the 16+ hours on the road, it felt like a vacation — a tiring, extremely busy vacation with little sleep — but there was no stress. The stress of the cobbled classics, and the upcoming races, everything, it seemed to go away. We shot this because we love the race and love bike racing. We shot this like fans with the best seat in the house.

We came with hedged expectations both years and left speechless, wondering how it was ever in doubt that we’d come. The race showed so much of the region, from its unbelievably beautiful coastline, to its green, farmed expanses in the interior. The stone houses, slung low to the ground, built to withstand the outrageous weather of the region, the equally stout churches, the weathered people, their respectful excitement for the race differed so much from the near psychosis of Roubaix the week before.

Roubaix’s excitement seemed built around alcohol and excess (what about Roubaix isn’t excessive? Isn’t that where its greatness lies?) The excitement around Tro-Bro Léon wasn’t in excess, but in its humility. The race is modest and small when compared to a Monument like Roubaix or the Ronde van Vlaanderen, but its simplicity merely emboldens its essence: it’s the jewel of the region’s cycling culture.

It’s Brittany’s most beautiful, and its people showed up in droves to enjoy their race. They weren’t crazy get-in-your-face fans looking to cause a scene, throwing beer or shouting obnoxious things at the riders. They were families, men, women, young, old, out to enjoy a day out and watch a race that embodies their region: hard-working, tough, salt of the earth, proud. The race puts Brittany on display, honours it, holds it high for everyone who is willing to take a look. The people come to appreciate and enjoy being a part of the scene, rather than taking over the scene.

In the end, in front of a packed crowd in Lannilis, it was Cofidis’s Adrien Petit who took the win by a mile over his breakaway companion, Big-Mat’s 23-year-old Flavien Dassonville. It was Petit’s first professional victory on European soil (he took a stage win at La Tropicale Amissa Bongo last year). Remember Arnaud Demare’s win at the U23 World Championships in Copenhagen a few years ago? Petit was right behind him.

The race was aggressive, as every French Cup in history seems to be. Petit and Dassonville got away late in the day, battered out to a decent gap, and had more than enough time to take a moment to think about the final sprint, before Petit opened it up and won by three seconds on the line.

Flats were a major issue. As one person said, many a tubular met an honourable end on the dirt on Sunday. IAM came out of the day extremely well with only five flats, but unfortunately, they came at extremely bad moments. Some teams were in the double digits for flats. Ashley saw one rider in the break flat three times on consecutive secteurs.

Watching from within the race

For the second year in a row I had a chance to shoot the race from a motorbike. It was only the third time I’ve done that (Tro-Bro Léon, Tour of Beijing … and Tro-Bro Léon) while Ashley got her first ever chance to shoot a race from a motorbike. From the motorbike, I saw something that I don’t normally get to see from the roadside, crouched in a ditch or swung high above the crowd. I saw the race. I saw the roads they raced on, up close, all day. I saw the front, the back, the aggressors, the aggressed. I saw suffering.

The racing was full gas from kilometre zero. Winds howled across the generally open expanse of the land and beat the race into an array of different pieces after only a few minutes. The race hit the seaside, and while I marvelled at the blue water, the rocky coastline, and the road built along its edge, the riders put their heads down, and hoped for the grumpy wind to blow at a friendlier angle soon, hoped for better legs, hoped for an easing of the pace, so they could find a more compatible spot in the group for their aspirations.

Each time I gawked at a town and its happy cheering fans, each time my jaw dropped along the Atlantic coast, each time I caught myself dreaming of riding my own bike across these roads, there was a rider edging ever closer to done.

I wanted to wave at every fan, smile at them, let them know how much they mean to this race, how they make up a huge part of its soul. On that Sunday, I appreciated them like I had never before. There was something so pure; it was energising.

As the race went on, I saw riders drift slowly off the back – off the back of the group, off the back of the break, right out of the top ten. Done. They had nothing more to give. There was no violence, no last-ditch effort, no Voeckler tongue, no tossing of the bike with powerful purpose, no point where you could say “they’re digging deep”. Those times were long gone. The shut up legs, the HTFUs, the standing struggle, the drops, the tops, the hoods, the coming off the nose of the saddle. All options had been exhausted, the rider was left with nothing, and when the bell tolled at last for its victim, there was nought he could do but accept his fate and let go of the day’s dream.

I saw the race from a privileged position. I saw landscapes that made me talk to myself, that made me reach down for my camera, only to realise that it was probably best to just look at them. I saw suffering like I had never seen it before, and I saw it from a foot away. I’ve suffered the same way on a bike but I’ve never been in such close proximity to someone whose heart and legs were near explosion, and I was just meandering along with a camera. I felt bad to be so close to them. I felt like they needed more room to suffer in their own private quarters, in peace.

I saw riders crash. I saw the wide eyes of the recognition of a broken bone, the acknowledgement that they’d lose opportunities and time, and maybe, by way of this impact, a lifetime’s dream cast asunder. I saw fear, I saw anger, I saw desperation, I saw resignation in the eyes and bodies of the dozen crashes that left the newly injured – moments before so focused on their survival and possible success – without an answer.

They stood there – just a crudely cradled arm, a grimace … and we were gone. Their misfortune was somewhere behind us. In front of us, riders dangling unceremoniously in ones and twos at the end of the race that devoured all but the strongest … and luckiest.

We drove along, roaring across the quiet Sunday landscape, trying to keep ahead of the break and the field, trying to find something special, something memorable. It was all memorable.

From pavement to dirt and back again, 25 times, up, down, almost always exposed. The land, the wind, and the race their toll, over and over again. 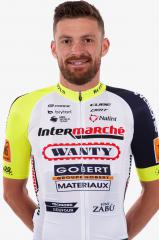