Justin Jules (La Pomme Marseille) has won the fifth and final stage of the 2014 Tour d’Azerbaijan, taking out a sprint finish in Baku ahead of stage 3 winner Youcef Reguigui (MTN-Qhubeka) and Adrian Honiskz (CCC Polsat). Ilnur Zakarin (RusVelo) maintained his overall lead in the general classification to win the race overall.

Four days after the Tour d’Azerbaidjan got underway in Baku, the race returned to the Azeri capital for a final stage that started and finished in Freedom Square. The 202km stage took the riders east out of the city towards the Caspian Sea, taking in an out-and-back section and a big loop before heading back to Baku for six laps of a 13.6km circuit that included a passage through Baku’s ancient Old Town.

The first 20km of the race went by at an average of 55km/h with the peloton staying together. By the time 40km had been covered though a group of three riders — David de la Fuente (Torku Sekerspor), Samir Jabrayilov (Baku Synergy) and Thomas Vaubourzeix (La Pomme Marseille) — had 40 seconds on the peloton.

The gap continued to grow, extending to as much as 5:00, but as the riders started making their way back to Baku the gap started to come down.

With four laps to go Samir Jabrayilov was dropped from the leading trio while behind them, in the peloton, a group of three riders was trying to bridge across, followed by another 15. These moves came to little and out front David de la Fuente and Thomas Vaubourzeix continued to hold on to an avantage of roughly one minute.

With a little more than two laps to go, two riders — Klemen Stimulak (Adria Mobil) and Gianfranco Ziloli (Androni Giocattoli) — attacked from the ever-shrinking peloton. A short time later, with 26km left in the Tour d’Azerbaidjan, Stimulak and Zioli bridged across to the two leaders. An exhausted Vaubourzeix was soon dropped and made his way back to the peloton and then the remaining three riders were caught by the reduced peloton which, by this point, was only around 40 riders strong.

Entering the final lap the pace was being driven by Itera-Katusha, RusVelo, Kolss and then Caja Rural. Karol Domagalski (Caja Rural) attacked the last time up the challenging climb on the streets of Baku and was followed a short time later by Darren Lapthorne (Drapac) — who was third overall going into the final stage — stage 3 winner Youcef Reguigui and leader of the best young rider classification, Robert Power (Australia).

All four were eventually caught, before Power, who turned 19 today, attacked again. He was joined by Hugh Carthy (Rapha Condor) but with 2km to go the race was all back together.

A group of 30 riders was in contention for the stage victory as the group rounded the corner on to Freedom Square for the final time. But in the frantic dash for the line it was Frenchman Justin Jules who was able to get clear, winning the stage ahead of Reguigui and Honkisz.

“The climbing on the laps was very difficult,” Jules said in the post-race press conference. “The selection today was done [at] the back of the race and not [at] the front.” Overnight race leader Ilnur Zakarin finished safely in the leading bunch and takes out the Tour d’Azerbaidjan by 1:52 ahead of Vitaliy Buts (Kolss) and Australia’s Darren Lapthorne (Drapac).

“It was a very tough day and a hard circuit,” Zakarin said. “The team protected me in the stage and in fact in the whole race. My first thanks go to my teammates, who earned the victory.” 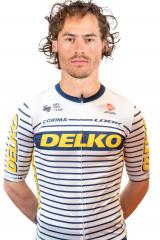