Former Tour de France yellow-jersey-wearer Linus Gerdemann (MTN-Qhubeka) has won stage 4 of the Tour d’Azerbaidjan, capitalising on his position in an early breakaway and an early attack of his own. He was joined to the line by Ilnur Zakarin (RusVelo) who moves into the overall lead with one stage remaining in the race.

A group of 16 riders got away early in the 115km queen stage and quickly set about building a lead. The group contained many threats to the general classification but with Darren Lapthorne in the lead group, Drapac was under no pressure to chase to protect the overall lead of Will Clarke.

In the town of Ismayilli, after 38.5km, the lead group had 1:10 over the peloton and after 50km, with the first of the day’s three climbs approaching, the leaders had three minutes.

On that first climb, a second category ascent, Linus Gerdemann attacked. There was still more than 50km remaining in the stage and Gerdemann later admitted that he thought he might have made his move a little early.

Gerdemann summited the first category climb on his own but as the town of Samaxhi and the final hors categorie climb approached, the two chasers were making ground on Gerdemann.

They caught him at the base of the climb and the lead trio had 50 seconds ahead of the eight chasers. Mas was dropped a short time later, leaving just Gerdemann and Zakarin together at the head of affairs.

Back in the main field, roughly four minutes behind the three leaders, Will Clarke, the overnight leader, couldn’t hold the pace being set by the Caja Rural-led peloton and fell back through the field and out the back.

Meanwhile Gerdemann and Zakarin were extending their lead as they made their way up the 22km climb to the finish at Pirqulu. With a little more than 5km to go, and with the gap out at 2:40 for the two leaders, Gerdemann broke a spoke. Zakarin sat up and waited for the German, earning praise from Gerdemann in the post-race press conference for his sportsmanship.

The two leaders crossed the line on the same time — Gerdemann first after winning the sprint — 1:55 ahead of the first of the riders from the chase group, Vitaliy Buts (Kolss). The result puts Zakarin into the overall lead by 1:52 ahead of Buts and 1:55 ahead of Luis Mas.

“My team protected me quite well during the first three stage and the whole idea was for me to jump in this stage and take the lead in the GC”, Zakarin said after the race. “Our task is of course to protect the jersey from here.”

Gerdemann’s stage win makes it back-to-back victories for MTN-Qhubeka and gives the German the lead in the KOM classification. Vitaliy Buts takes the lead in the points classification while Robert Power from the Australian National Team will wear the best young rider’s jersey on the final day of racing.

The 2014 Tour d’Azerbaidjan ends tomorrow with a 202km stage that starts and finishes in Baku, including six laps of a circuit around the nation’s capital. 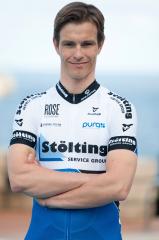