The 187km second stage took the riders west-north-west out of the Azerbaijani capital of Baku, through windswept semi-arid desert and into greener surrounds on the approach to the finishing town of Ismayilli.

The day’s first major breakaway featured just two riders — Laurent Vanden Bak (An Post-Chain Reaction) and Gregoire Tarride (La Pomme Marseille) — and with the peloton letting them get clear, the pair had built a three minute advantage by the time 15km had been raced. The gap was out beyond six minutes after 20km but by the time the two leaders had eight minutes (after 43km of racing) the peloton started to pick up the pace and reduce the deficit.

With 60km covered just Vanden Bak remained out front, chased by a group of 25 riders three minutes behind, including his former breakaway companion Tarride. Strong winds on the open roads of Azerbaijan had split the peloton for the second day in a row.

At the first sprint point, after 67km of racing, it was Vanden Bak that took maximum points, ahead of Vitaliy Buts (Kolss).

The first of the day’s three climbs — a second category ascent between Baku and Gobustan — was taken out by Buts, who showed he was keen to hold on to the KOM jersey he’d won on stage 1. Buts’ Kolss teammates Dymtro Krivtsov and Andriy Vasylyuk took second and third over the climb.

After 100km of racing the lead group was 43 riders’ strong and when they hit the second climb of the day after 117.5km, Primoz Roglic (Adria Mobil) made his move, followed shortly by Drapac’s Will Clarke. Roglic took the points on the third category climb ahead of Clarke, while Buts again rode clear of the peloton to take third over the top.

A short time later Clarke caught Roglic and the two of them set about building an advantage of 40 seconds. After 125km they had 1:50 on the chase group and by the second intermediate sprint after 130km the lead was up to 2:10.

The final and toughest climb of the day started after 147km and it was Roglic who proved strongest, distancing Clarke slightly on the second category ascent. But the two joined forces once again for the final 30km to the finish with a 22-rider chasing group bearing down from behind.

Ukrainian rider Aleksandr Surutkovych (Baku) tried to bridge across to the two leaders but wasn’t able to stay in front of the surging group. As the two leaders rounded the final bend in Ismayilli, Roglic was on the front and Clarke never looked to challenge the former Slovenian ski jumper (who only took up cycling a couple of years ago). “At first I stayed behind in the second group, then we caught the first group at the feeding zone”, Rogli said of his day. “Then [I] went in front with [Will] Clarke on the descent leading up to the category one climb. And then I won the mountain points and the stage. This is my first win in my cycling career so it means a lot.”

Tomorrow’s third stage of the race takes the riders on an out-and-back course from Qabala to Sheki and back again with six climbs along the way, but only one of the categorised.

Race leader Will Clarke hopes to defend the jersey for Drapac.

“I’d like to hold on to the leader’s jersey as long as possible; hopefully I can recover well tonight so I have a lot of energy tomorrow to defend the jersey”, Clarke said in a post-race press conference. “I’m looking forward to the challenge.” 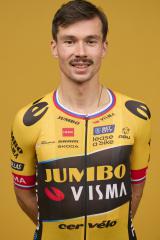