Youcef Reguigui (MTN-Qhubeka) has won stage 3 of the 2014 Tour d’Azerbaidjan, jumping away from the peloton on the uphill drag into Qabala just after the bunch caught the day’s main breakaway. Matej Mugerli (Adria Mobil) was second, ahead of Kristian Haugaard (Development Team Giant Shimano). Drapac’s Will Clarke finished safely in the bunch to hold on to the overall lead that he claimed on stage 2.

The race got off to a fast start and it wasn’t until after 50km and a flurry of attacks that three riders were allowed to start building the day’s main escape: Adrian Hornkisz (CCC Polsat Polkowice),Thomas Vaubourzeix (La Pomme Marseille) and Ivan Stevic (Tusnad). With all three riders more than 11 minutes off the overall lead there was no urgency in the main field from Drapac, the team of race leader Will Clarke.

After 60km the three breakaway riders had two minutes on the main field with the gap continuing to grow. The day’s only KOM, the second category climb at the turnaround point in Sheki, was taken out by Hornkisz ahead of Vaubourzeix and then Stevic.

The three leaders had 5:30 over the main field after 105km but shortly after that the gap started to come down. With 60km to go their lead was down to 4:45.

With a little under 50km remaining two riders crashed — Dennis Van Niekerk from MTN-Qhubeka and Gianfranco Gilioni from Androni-Giocattoli — with the former forced to abandon the race.

With 35km to go Drapac, Baku and Androni-Giocattoli were chasing hard on the front of the peloton and by the time just 20km remained the gap was down to three minutes.

With 5km to go the three leaders still had 1:30 over the peloton and it looked as if they should stay away. But the lead group split apart in the closing kilometres and with 2km remaining it was all set up for a sprint finish.

A great lead-out from Johann van Zyl and former Tour de France yellow-jersey-wearer Linus Gerdemann put their Algerian teammate Reguigui in a perfect position. He kicked hard on the uphill finish and crossed the line first. “Today was hard because I had dead legs in the beginning of the race”, Reguigui said. “I’m happy because it’s my first win as a professional.”

Tomorrow’s queen stage of the race takes the riders 115km from Qabala to Pirqulu, the stage ending with a 22km hors categorie climb that could decide the race overall.

GC leader Will Clarke goes into the stage hoping to be able to defend his blue jersey for the second day in a row.

“It will be a day of fighting for me. I’m not really a climber but if I’ve got good legs I’m hoping to stay near the front”, Clarke said. “I had good legs yesterday so hopefully I’ve got them again tomorrow. Anything can happen if I have a good day and maybe I’ll be able to hold on to the jersey.” 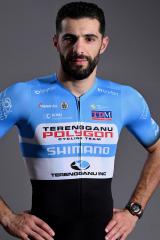