After three long weeks of racing the 2014 Giro d’Italia has come to a close. It seems like a lifetime ago that the first stages of the race were being contested in Northern Ireland, and since then the race has unfolded in dramatic and exciting ways. This gallery of images documents the final six stages of the race, including a snow-affected stage that took the riders over the Passo dello Stelvio.

If you haven’t already, follow the links to check out image galleries from stages 1 to 3, stage 4 to 9 and stages 10 to 15 of the race.

When the race resumed after the third and final rest day, Rigoberto Uran (Omega Pharma-QuickStep) was in the maglia rosa for the fourth day in a row and the riders were set to face the race’s queen stage.

They climbed the Gavia and the Stelvio, with metres of snow lining the roadside, and when it came time to descend the Stelvio in horrendous conditions, confusion struck. Some riders thought the descent was neutralised while others didn’t, and in the meantime Nairo Quintana (Movistar) got off the front in small group. He would go on to win the stage at the top of the third and final climb of the day, taking the maglia rosa from Uran, his close friend and former housemate.

Some would claim that Quintana had attacked on the Stelvio descent when he shouldn’t have, and that his overall lead was the result of foul play. But he would prove over the coming days that he was the strongest rider in the race and that even without the stage 16 victory, he would almost certainly have won anyway.

On stage 17 Stefano Pirazzi notched up a third stage victory for his Bardiani-CSF squad at this year’s Giro, timing his sprint perfectly to win ahead of his breakaway companions. Quintana, in the maglia rosa for the first time, finished more than 15 minutes behind Pirazzi, but with all the GC contenders in the same group Quintana maintained his overall lead.

On stage 18 the race went back into the mountains and it was Julian Arredondo (Trek) that won on the mountain-top finish to further secure his lead in the KOM classification. Quintana was nearly three minutes back on the stage but still led by 1:41 overall by day’s end.

Stage 19 was an uphill time trial to Cima Grappa and it was Nairo Quintana in the maglia rosa that took the stage victory to further increase his overall lead. Fabio Aru (Astana) was best of the rest after another talent-confirming ride.

On the penultimate stage of the race the riders faced one of the hardest climbs in world cycling: the Monte Zoncolan. It was Australia’s Michael Rogers (Tinkoff-Saxo) who won the stage after getting in the early break and riding away on the brutally steep climb. Quintana was the first of the GC contenders over the line, all but securing his first Grand Tour victory.

And on stage 21, the final stage of the 2014 Giro d’Italia, it was Luka Mezgec (Giant-Shimano) who proved strongest in the bunch sprint, taking his team’s third stage win for the race. A delighted Nairo Quintana crossed the finish line in the bunch, fist in the air, celebrating his overall victory. 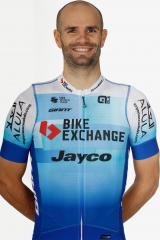 The riders snake their way up into the snow-lined mountains on stage 16.

The descents proved treacherous on stage 16 and there was even talk of the Stelvio descent being neutralised. But confusion reigned when it wasn’t clear whether a neutralisation had been enforced or not.

Nairo Quintana won on stage 16, taking the overall lead in the process.

Stefano Pirazzi made it three stage wins for Bardiani-CSF with his stage 17 win from a breakaway.

Nairo Quintana has been a popular leader of the race.

Julian Arredondo took the best climber’s jersey on stage 8 and never let it go. His win on the mountaintop finish to stage 18 confirmed him as one of the best and most active climbers in the race.

The stage 19 ITT was a chance for the GC contenders to grab more time off their rivals, and a chance for other riders to take things a little more easily.

Nairo Quintana extended his overall lead with a win on the stage 19 ITT.

Michael Rogers is followed by Francesco Bongiorno after the two escaped from the breakaway at the base of the Monte Zoncolan on stage 20.

An incident with a fan saw Bongiorno lose Rogers’ wheel with the latter riding away to victory.

The Monte Zoncolan climb is roughly 10km at an average gradient of just under 12%; enough to make even the world’s best climbers suffer.

Former leader of the race Rigoberto Uran approaches the summit of the Monte Zoncolan with Nairo Quintana.

It’s been an incredible Giro for Mick Rogers. He’d only raced once in six months before the start in Ireland and he would go on to win two stages in the race.

Luke Mezgec takes the win on the final stage ahead of Giacomo Nizzolo and Tyler Farrar.

Heavy rain set in just as the presentations began.