The 2014 Emakumeen Euskal Bira finished yesterday after four days of racing in Spain’s Basque Country. “Bira” is actually the only Spanish UCI-classified stage race on the Elite Women’s calendar and it’s a race that’s defined by many tough, selective climbs.

While this year’s Bira was thoroughly dominated by the Rabo-Liv squad, theirs is just one of many stories from within the race. In this post, Australia’s Loren Rowney (Specialized-Lululemon) writes about how the race unfolded from her perspective.

While much of the cycling world has been focused on the battle between Froome and Contador (and Talansky!) this past week in the Dauphine, the pro women have had their own battle going on in Spain. The Emakumeen Euskal Bira women’s race can be compared to Dauphine for the men — it’s a hard, shorter stage race where contenders for the biggest stage race of the year (in our case the Giro Rosa) get to flex their muscles, lay down the smack and play some of their cards.

While the hills of the Basque Country are picturesque, we didn’t have much time to take in the countryside thanks to fast speeds and tough climbs. The race this year was arguably one of the tougher editions with no sprint stage or time trial to break things up. Here at Specialized-lululemon, we came into the race with a well-rounded team of opportunists. But with no pure hill climbers it was always going to be tough to contest the likes of Marianne Vos (Rabo-Liv), Emma Johansson (Orica-AIS) and Elisa Longo Borghini (Hitec Products) in the mountains.

When an Aussie is suffering in hot conditions, it must be legit hot. Today for me and the rest of the peloton, was the start of summer, and a taste of what lies ahead at the Giro Rosa in Italy in a few weeks. Upper lip sweat on the start line is never a good sign. We took off at 4pm, with a fast rolling start to the race. The race would be decided between kilometre 54 and the finish, with an 11km berg, a rolling plateau of 10km before a final 2km ascent.

My race was over about halfway up the 11km climb where I found the grupetto. Rabo-Liv however, destroyed the field, with three of their riders — Pauline Ferrand-Prevot, Anna van der Breggen and Marianne Vos — TTTing to the finish to sweep the podium. Trixi Worrack was our highest place finisher running a top 10.

I’m sure all teams (bar Rabo) were thinking “onwards and upwards”, and stage 2 was another day to try again! 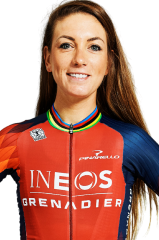 After how Bira had panned out, the team reassessed its options before stage 2. With a team of opportunists, and no stand-out climber, our best chance at winning a stage was to get someone up the road early and hopefully make it over the big climbs of the day.

The winning move of the day was made on the final descent. Vos, Johansson, Armitstead and our Dutch demon descender Chantal Blaak made the move and stayed away till the finish.

Chantal just missed the podium and ran fourth, while Vos took the yellow jersey. A great result, and we were getting ever closer to that elusive podium.

After driving up one of the designated QOMs of the day to get to the start, I was pleasantly surprised to feel the temperature was about 10 degrees cooler than the previous two stages. Phew, already off to a better start!

After a fast neutral start downhill, the peloton was a little more relaxed in its approach to the start of the day. I think everyone was worried about kilometre 39 and what awaited before the QOM at kilometre 45.

The race split as predicted on the first QOM of the day — a nasty, pitchy climb that saw the move of the day go, never to be seen again. We had only one rider present — Trixi Worrack — Boels Dolmans had three, Rabo had four, and then there were various riders from other teams.

Once again Rabo proved too strong, with Prevot soloing to the win for the second time this week. Vos ran second ahead of Johansson.

The internal battle for yellow within the Rabo team can be compared to that of the changing of the guards at Buckingham palace — each rider was taking their turn, switching back and forth. Stage 3 would hopefully reward the opportunists, and we would try to take something home.

Before the start of the final stage, our team captain Chantal Blaak gave us a pep talk in the form of one simple quote: “everyone’s head is already on the flight home, and that’s why we must fight harder.”

Three categorised climbs awaited us, all of which got steeper and steeper as they went on.

After being paraded around the start/finish town like we were show ponies at a race carnival, the flag was waved and it was game on. With no podiums to speak of this week — like 90% of teams — we knew our best chance was to be aggressive. Everyone was tired and already thinking about their 6pm flight home.

After some startline banter with fellow Aussie and friend Chloe Hosking, I declared that I was getting over that first bitch of a climb in a breakaway. And that we did.

Chloe, myself, my teammate Elise Delzenne, plus some of the heavy hitters — Lizzie Armitstead (Boels Dolmans), Amy Pieters (Giant-Shimano), Elena Cecchini (Estado de México-Faren Kuota) and Valentina Scandolara (Orica-AIS) — had a gap of around 2:50 by the time we hit the first climb.

I had my teammate Elise with me in the break, so our odds were good. Elise, the better climber of the two of us, made it over the first two climbs with five others and managed to battle on.

Unfortunately, by the third ascent, (at this stage I was back with the “laughing bunch”) Vos, and the other GC contenders had bridged to the break and attacked up the final ascent, shattering the already dwindled-down field.

Vos went on to win the stage, with teammate Pauline securing the overall GC. For our team, like many others, we walked away with no podium, not even the most elegant award! Rabo proved too strong this week, and I’m sure every team will relish the fight to come at the Giro Rosa. “You’ve got to relish the fight. Sport is war.”