The Giro has suddenly become very interesting in the fight for overall GC. Emma Pooley (Lotto-Belisol) took her second stage victory on the mountain top finish of San Domenico di Varzo. Mara Abbott (UHC pro cycling) came in just behind her in second with Anna van der Breggen (Rabobank) claiming 3rd at 29 seconds off the leaders. Here’s Tiff Cromwell (Specialized-Lululemon) with her report from within stage 8 of the race.

Stage 8 was named as the Queen stage of the 2014 Giro Rosa. It was only a short stage at 90.8km in length but it featured a 13km mountain-top finish. We can all thank Elisa Longo Borghini (Hitec-Products) for today’s course as she designed it, the stage being raced around the area of her hometown.

Starting on the shores of Lago Maggiore in the town of Verbania, the course followed the lake for a few kilometers before heading away over a couple of small climbs and crossing into the valley. The race followed the valley all the way up to the final climb and then all that was left was the unforgiving category 1, 13km climb to San Domenico di Varzo.

Today’s plan was simple — with the nature of the course it was going to be a battle between the mountain goats. With Evie Stevens showing she is the only one from our team with any chance against the top climbers, we would support her for the stage. We wanted to try and have a breakaway, putting an extra rider up the road to get a head start for the final climb and offer support to Evie when the front of the race reached the breakaway. For the rest of the team, we would help position Evie into the climb, keep her out of the wind and last as long as possible with her on the climb offering any extra support we could.

A morning rain shower and overcast conditions had us thinking that we could be in for a wet race but conditions kindly cleared by the time we were ready to race. The peloton rode out of Verbania along Lago Maggiore for a few kilometres of neutral until we reached kilometre zero. When the flag was dropped it was game on — the pace was so high along the lake because everyone knew we were hitting a climb after 7km of racing. I looked down at my SRM and we were travelling at well over 50km/h.

Before I knew it we were already at the climb and we took a sharp left-hand turn on to cobbles – this was unexpected and lasted for about 200m before we hit the tarmac and continued to climb. I had managed to weasel my way towards the front in time for the turn but it was a fight. The pace stayed high all the way up and over the top. It was nice; for once my legs felt good so early on in a stage this late in the tour. Normally I’m suffering like crazy and pedalling squares.

The roads undulated after the opening climb and we snaked our way across the hills before we reached the valley and the attacks were on. For the first hour of racing and then some it was the same story, attack after attack after attack.

I lost count how many times my teammates or I had attacked along with other teams and there were plenty of moves that looked like they would be the one that would stick. But for some reason or another it would always come back together.

After a while it became frustrating, as there weren’t GC contenders getting into the moves — it was always riders well down on GC that would most likely get caught back on the climb too. But it just wasn’t happening today. It’s amazing though, the first hour of racing today was the fastest opening hour we had all tour, at around 43km/h average speed.

Finally after 60km of racing the peloton settled down realising that a move wasn’t going to go free so it was time to start getting prepared for the final climb. It was time to go back and see where Evie was at, see how she was feeling and start thinking about positioning her for the climb.

Despite the final climb only being 13km long officially, realistically the road started climbing from 20km to go as it dragged up towards the base of the climb with a couple of harder sections on the approach. We managed to get all of the team together controlling the pace at the front, keeping Evie in good position.

The race to the base of the climb was hectic as there were plenty of other teams trying to look after their climbers to deliver them at the front into the climb. It felt like we were doing a sprint finish — I spent a lot of matches helping out but realistically my finish line was at the base of the climb and any more was an added bonus.

It was so hard — the legs were screaming but it was just a little longer in the wind before we could put the hazard lights on and let the climbers do their thing at the front. Trixi Worrack did the last pull putting Evie into a perfect position and then it was up to Evie to work her magic.

It becomes a bit of an obstacle course the start of the climb as the pace is usually so high at the front before it gets settled then you have all of the helpers coming backwards through the peloton at a rate of knots and you need to try and avoid them. It’s nice when everything gets sorted out; you find your group and make your way to the top.

Not being there fighting it out with the climbers I didn’t really know what was going on up front, instead I was trying to enjoy the atmosphere of the climb as much as I could. The opening 8km of the climb flashed by surprisingly fast and we had already reached 5km to go. The sad thing though is the final 5km felt like an eternity, as it was tough with gradients up to 12% and the road never backed off. I had my teammate Chantal Blaak to climb with so it was nice to have the company.

We encouraged each other to help us reach the top, pedal stroke by pedal stroke, and there may have been some cursing going on. Climbing, tiredness and day nine of the Giro can bring out the worst in us but it’s all part of bike racing.

Up front, however, it sounded like it was quite the battle with the front group whittling down rider by rider. Emma Pooley continued to show that she is back to her best, increasing the speed little by little in the final kilometres until she had cracked everyone and went on to take the stage victory. Mara Abbott, who claimed victory on this same finish last year and sealed her Giro Rosa victory, was breathing down Pooley’s neck but didn’t quite have enough to take the stage.

It was an interesting shake up in the GC standings. Marianne Vos (Rabo-Liv) climbed well enough to hold on to her pink leader’s jersey but her lead has been dramatically cut. Rabobank hold on to the top three placings on the overall classification showing dominance, but could this cause them leadership problems? Pauline Ferrand-Prevot is now only 16 seconds behind Vos and she finished fourth on the stage today.

Tomorrow is another mountain finish on top of the famous Madonna di Ghisello; it is a shorter climb to the finish at only 7km, which will suit the Rabo-Liv climbers better. Abbott is about the only rider who could realistically take the jersey away from Rabobank but she still has 1:39 to make up; a big ask on a shorter climb.

The big question will be, will Vos hold on to pink or will one of her teammates take it from her on the final day of racing? 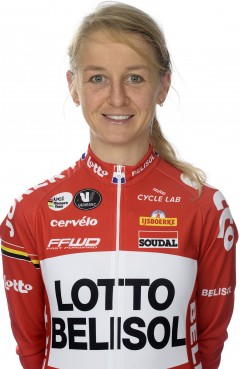 Head to our Giro Rosa preview to find out what’s in store for the final stage of the Giro Rosa.