It was the queen stage of the USA Pro Challenge today and with a man called King (Ted) in the Cannondale clan we figured it was a good omen for the green machine! We had a very simple objective today — be in the day’s breakaway as it stood a good chance of arriving at the finish before anyone else. While the day’s breakaway did survive to the finish, the make-up of that breakaway was quite unexpected.

It seemed pretty much every team had the same idea when the flag dropped today as riders shot out of the peleton left, right and centre. With the altitude you need to do your best to measure your attacks as you don’t get many of them. It’s a little more of a chess game than usual to enter the day’s escape.

My tactic was to wait for something that looked threatening to form and then jump across, which I did a few times and was convinced it was gone. But as often happens on days like today, someone wasn’t happy with the move’s make-up and a lack of cooperation up front and a chase from behind killed any threatening moves.

The stage was pretty simple in terrain: one single road! The first 50km was on the flat to the base of the the day’s major climb which we would ride up and over the other side, do a couple of laps of a town and ride back up the side we just descended to complete 150km of racing. My biggest fear before the stage began was that I would shoot all my bullets trying to get into the breakaway before the first climb which rose to over 3,500m in elevation and would then explode on the climb!

When I saw so many others going berzerk for the break, along with me, I figured it was worth the risk — worst case scenario I would have quite a few guys for company if I failed and was spat out the back! I had no idea, however, just how massive the group of guys in that position would turn out to be.

As we flew along the valley at more than 50km/h I started to realise that the break not sticking before the climb was a real possibility. Still, threatening moves were forming which I had to be in and when one almost got away at 45km I thought “beauty” but then just as quickly it was over.

Sure enough after less than an hour of racing on a false flat, we hit the lower slopes of the climb and all the GC men whom had been saving their pins were drawn into action by attacks from the big boys of this year’s race, including Tom Danielson and Tejay van Garderen. It was not the sight I wanted to see so early in the stage, these boys countering the final failed attempt by us opportunists to jump clear, but I had made my bed and now I had to lie in it. I had to try and survive this 15km climb with far less oxygen available than my body desperately needed!

Immediately the strongest guys were clear and I was in the middle of the peleton and the break. I recovered as best I could and did my best to keep the lead group at a manageable distance while riding at a pace that would allow me to form as many allies around me as possible. I quickly had a good-sized group so I just kept the pace solid enough to give us a chance to come back on the descent.

At this point I realised there were only 12 riders or so up ahead, another 20 in between me and them. This meant there were more than 80 behind me. I was instantly worried about Elia [Viviani] as it was important he saved as much energy as possible today, for the three upcoming potential sprint stages.

I realised that even if we got back on terms, like yesterday I wasn’t at the level of the best guys this week, so I backed the chase off. I had been doing the pace-setting as sadly we were the only team without a rider in the front group — our captain Ivan Basso was having some difficulties with his breathing at the high altitudes.

With the chase backed off Elia was now able to plonk himself in the middle of the group and save some energy. You need to pick your battles in this sport and particularly as the green machine is hardly firing this week we need to be even more precise with the how we deploy our lagging resources!

So that was the race there and there. Within the first 60km around 90 riders were out the back of the race and the strongest 15 were up front. The rest were somewhere in the middle. Basically everyone was simply trying to get to the finish at their own pace, some to fight for victory, and most, to simply live to fight another day. As our whole team was in the 90 rider group we kept a nice moderate pace for all to enjoy for the stage and made sure Elia was able to save as much energy — both mental and physical — for the coming days.

We’ll see what we can do tomorrow. It hasn’t been the greatest of weeks so far so we’ll be working hard to see if we can turn things around quickly! 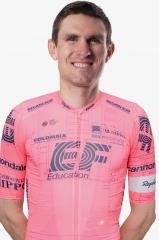 Follow the links below for Cam’s reports from the previous stages: