The third and final week of the Vuelta a España is well underway and Alberto Contador (Tinkoff-Saxo) appears to be marching toward his third title in the Spanish Grand Tour. But there are still five stages to go and just about anything could happen. Before those final stages unfold, check out these photos from stage 13 to stage 16, courtesy of Jim Fryer and Iri Greco of BrakeThrough Media.

On stage 13 of the Vuelta a España Daniel Navarro (Cofidis) responded to a late attack from Gianluca Brambilla (Omega Pharma-QuickStep) before riding away to win the stage. The general classification remained largely unchanged with Alberto Contador (Tinkoff-Saxo) maintaining the overall lead he took on stage 10.

The following day, on stage 14, Ryder Hesjedal (Garmin-Sharp) got himself in a 23-rider breakaway then made the final selection and clawed his way to victory. Contador maintained his lead to earn a fifth straight day in the red leader’s jersey.

On stage 15, Przemyslaw Niemiec (Lampre-Merida) got in the day’s break before pushing on with Cameron Meyer (Orica-GreenEdge) then dropping the Australian to take a solo victory. Contador again held firm, but was frustrated by a lack of assistance from Alejandro Valverde (Movistar) and Joaquim Rodriguez (Katusha) to help distance a struggling Chris Froome (Sky).

On stage 16, Contador got his revenge, breaking free of Valverde, Rodriguez and Froome to take his first stage win of this year’s Vuelta and extend his overall lead.

And so, with the second and final rest day complete, Alberto Contador leads the 2014 Vuelta a España by 1:36 over Alejandro Valverde. Chris Froome is second, a further three seconds back, while Joaquim Rodriguez and Fabio Aru round out the top-five. 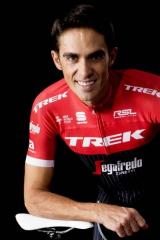 So as we await the start of stage 17, be sure to check out the following gallery of photos from stages 13 to 16 courtesy of BrakeThrough Media. Click through to follow them on Instagram and Twitter.

Dani Navarro responded to an attack by Gianluca Brambilla on the final climb of stage 15, before riding away to win the stage.

Esteban Chaves went into the Vuelta as Orica-GreenEdge’s GC hope. The 24-year-old finished seventh on the uphill finish to stage 6, but has since faded to 30th place overall.

Yes, it happens all the time in the groupetto.

Winner Anacona buries himself during the tough final climb on stage 14.

Ryder Hesjedal had been part of an early break on stage 14 before moving ahead in a smaller group in the finale.

Chris Froome moved into third overall after gaining some time on all the other GC rivals on stage 14.

Fabio Aru moved up into sixth overall on stage 14.

Rigoberto Uran gets some media attention after dropping from fifth overall to third.

Laurens Ten Dam finished more than nine minutes back on the stage.

Cadel Evans gave up his chances of winning this year’s Vuelta early in the race. On stage 14 he dropped 15 positions overall, down to 54th overall, nearly an hour down on Contador.

Przemyslaw Niemiec had been in the early break on stage 15 before moving clear with Cameron Meyer (Orica-GreenEdge) on the final climb.

There was some stop-and-go racing from the GC contenders behind Niemiec, with Valverde and Rodriguez choosing not to help Contador drop a struggling Chris Froome.

His stage win at the Vuelta is arguably the biggest win of Niemiec’s career, along with his GC win in the Route du Sud in 2009.

After 15 stages of the Vuelta, Alberto Contador led proceedings by roughly 30 seconds.

Rigoberto Uran (Omega Pharma-QuickStep) was dropped on stage 16 and said goodbye to his GC chances. The Colombian, who is apparently dealing with illness made it back to the peloton on the descent was soon dropped again.

Dan Martin climbed to 7th position on stage 7 and was 1:12 back from the winner, Alberto Contador after him and Chris Froome obliterated the field.

Alejandro Valverde hung onto his second place GC position after stage 16 but Chris Frrome is now within 3 seconds of the Spaniard.

Alberto Contador shows his dominance on stage 16 and extends his lead on the general classification. Never has Alberto Contador taken the overall race lead of a grand tour and let it go.

Mitch Docker riding his second Vuelta a Espana and his second Grand Tour of the Season now sits in 155th place overall.

Cadel Evans came in 23 minutes down on stage 16 and in 59th position overall. There is still no word on Evans’ situation for next season.