The Australian summer of racing continued with the Mars Cycling Australia National Road Championships. Kimberley Wells (ACTAS) took out the criterium title on Wednesday while Shara Gillow was crowned individual time trial queen for the fourth time in five years the following day. The final and arguably the most prestigious title was decided on Saturday when a field of 74 lined up in Buninyong to contest the national road championships.

Two green and gold jerseys would be awarded following 10 laps around the 10.2km circuit. Peta Mullens took a stunning victory from the elite women’s field while Shannon Malseed, 11th overall, earned the U23 women’s title. Here’s a selection of our favourite photos from the exciting day of racing. 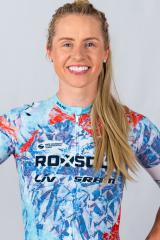 The women’s field turn off the start/finish stretch onto Midland Highway for the first of 10 laps. Although the forecast projected heavy rain, the day was dry from race start to race finish. Seventy-four women started the race but only 45 survived to the finish.

The women’s field heads toward the finish line following the first lap of the race.

Bridie O’Donnell (Total Rush) rode in support of Ruth Corset while Lizzie Williams was part of the Orica-AIS three-rider contingent.

2012 Australian National Road Champion Amanda Spratt (Orica-AIS) spent nearly four laps in a solo breakaway. “I was just thinking I need a friend. I need a friend. But no one came across,” Spratt said in a post-race interview.

As two-time defending champion, Gracie Elvin (Orica-AIS) lined up as the hot pre-race favourite. She admitted the pressure of the three-peat rivalled the nerves she felt ahead of the Commonwealth Games last July in Glasgow.

CyclingTips editor Matt de Neef and CyclingTips business developer Andy Van Bergen combined forces to throw a party atop Mount Buninyong in support of the women. The group cheered on every rider up the hill from the first to the last.

Peta Mullens (SRAM), reigning cross-country eliminator (XCE) mountain bike champion, could not contain her surprise and delight following her victory. “It’s a bit ironic because this was suppose to be my only road race for the year,” she said in a post-race interview. “Now that I have won the stripes I might have to change my plans.”

“At one stage, I was gaining on them. But the climb ran out. I was happy with the result. My legs were tired at the end.” – Shara Gillow (Rabo-Liv) on bronze in a post-race interview.