On the final day of the Mars Cycling Australia Road National Championships yesterday, the elite men took to the now-famous 10.2km circuit around Buninyong to decide who would wear the green and gold bands for the next 12 months.

After an action-packed race it was Heinrich Haussler (IAM Cycling) who sprinted to victory from a six-rider leading group, with 20-year-old Caleb Ewan (Orica-GreenEdge) second and Neil van der Ploeg (Avanti) third.

Photographer Con Chronis was out on course following all the action and sent over the photo gallery you can see below. 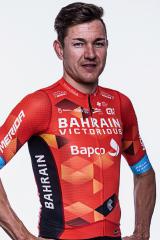 In his last national championships Cadel Evans was one of the pre-race favourites.

As too was Richie Porte, who won gold in the time trial earlier in the week.

The elite men’s road race was contested over 18 laps of a 10.2km circuit that started and finished in Buninyong.

It’s often hard to tell whether Richie Porte is smiling or grimacing. That said, he looked very comfortable in the peloton all day and only really hit out in the closing laps, when the race was more or less over.

Cam Wurf (centre, grey and white chequered kit) rode for Cannondale last year but it’s not yet clear who the Tasmanian is riding for in 2015.

The peloton descends Fiskin Road towards Buninyong for the start of another lap.

Caleb Ewan (Orica-GreenEdge) is in good company on the descent back into Buninyong early in the race.

Brendan Canty (Budget Forklifts) did much of the pacemaking in the day’s first major breakaway, riding in support of his team leader Jack Bobridge, who was also in the break. Their teammate Josh Berry was also there, in a group of 15 riders that came together on lap 5.

Avanti missed the first of the day’s major breakaways and spent much of the race trying to close down the gap.

Robin Tiffany: a familiar face at the Aussie Road Nationals.

The peloton begins the top section of the course before descending back towards Buninyong.

Luke Durbridge was aggressive on the Mount Buninyong climb in the breakaway, opening up a short-lived lead with Brendan Canty on lap 9.

The 10.2km circuit gave fans roughly 16 minutes between passes of the peloton, just enough time to read through the local paper, The Courier.

Damian Howson hit out from the lead group on lap 10 and would lead the race solo for a lap.

Will Clarke (Drapac) punched out of the lead group on lap 11 after Howson had been caught. He was followed by Pat Lane a few laps later with the two making contact just after the KOM on lap 14 of 18.

On the 15th time up Mount Buninyong Pat Lane broke clear of Will Clarke and led the race solo for a lap.

Angus (front) and Lachlan Morton had a great race in the colours of their new Jelly Belly squad. Angus made it into the winning breakaway and finished an impressive seventh.

Support for Cadel Evans was strong on Sunday but the 2011 Tour de France winner was unable to take victory in what will be his final Road Nationals.

Michael Hepburn offers his teammate Caleb Ewan a helping hand in the lead group in the closing laps.

The elite selection of seven riders was made on the final two laps. Michael Hepburn attacked on the penultimate lap, reducing the lead group to seven, with eventual winner Heinrich Haussler distanced. He’d catch back on (with a couple others), only to be dropped again on the final time up the climb.

Campbell Flakemore attacks from the elite lead group on the final climb, and is marked by Caleb Ewan. Ewan would make the catch then attack on his own, opening up a small gap before being caught by Jack Bobridge and another four riders.

Haussler couldn’t stay with the pure climbers on the last two ascents of Mount Buninyong, but each time he managed to catch back on. He rejoined the lead group of six with little more than 3km to go.

… despite dropping his chain just before the line. (Image: Troy Upfield)

Haussler couldn’t hide his delight after crossing the line to take out the Australian title.