Richie Porte was joined on the podium by Rohan Dennis (BMC) and Jack Bobridge (Budget Forklifts) and spoke after the race of his delight at winning his first Australian national title against such quality opposition.

“I’m a happy boy. I just got engaged a couple days ago and to win this time trial against such a class field it’s fantastic,” Porte said.

Rohan Dennis was the fastest at the turnaround point, starting the second half of the out-and-back course with a 25-second advantage over Bobridge and 32 seconds clear of Porte. But Dennis faded in the second half while Porte powered home, the hilly course very much to his liking. Rain fell for most of the race but when asked whether the conditions played any part, Dennis replied “not at all.”

Lachlan Norris (Drapac) was in the hot seat as the big favourites headed for the finish, having set a time of 54 minutes 24 seconds a short time earlier. When Bobridge rolled through the finish he took more than two minutes off Norris’ lead, posting a new best time of 52:17.

Richie Porte rolled in a short time later, taking a further 27 seconds off Bobridge’s time and moving himself into the overall lead with just a handful of riders still to finish. Porte’s biggest rival, Rohan Dennis finished in a time of 51:58, just eight seconds behind.

After claiming gold, silver and bronze in last year’s national championships Orica-GreenEdge would find itself without a medal in 2015. Damien Howson was fifth, Luke Durbridge was fourth, and last year’s winner, Michael Hepburn, was seventh. The victory comes as some relief to Porte who struggled with illness throughout 2014 and brought his season to a close in August.

“The problem for me last year was my health and it looks like I’m back on top of it,” Porte said. “I’m thrilled to bits to win this.”

Porte was quick to praise Team Sky’s Head of Performance Tim Kerrison for his help in improving Porte’s performance on the TT bike.

“I haven’t done a good time trial on a course like this for a long time,” Porte said. “We’ve done a lot of work on my time trial position and it’s a credit to Tim Kerrison who’s believed in me even after the disaster which was 2014.”

Porte will now turn his attention to the the Nationals road race on Sunday where he will once again line up as one of the favourites.

“I’d like to enjoy this [victory] for the moment but I think tomorrow, 8 o’clock I’m back out on the road bike for three and half hours,” Porte said. “Sunday’s a bit more of a lottery … but I can take confidence from this and if that doesn’t work out I’ve still got one jersey and a great team at Tour Down Under. 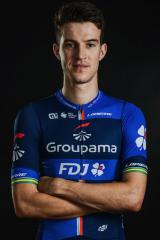