Three races this weekend marked the beginning of the end of the one-day spring classics for the women’s peloton. Whilst Belgium and Holland will play host to a handful of single day races in May, we’re on the cusp on stage race season in Europe as the World Cup series visits the further-flung destinations of Chongming Island, China and Philadelphia, USA in the next six weeks. “For me it means a lot to win the first time trial of the year,” van Dijk told Ella CyclingTips. “It’s always a bit of a test of where you’re standing. It doesn’t matter so much for the rest of the year, but it’s a good zero measurement. If it’s positive, for sure, it’s a better way to start than when you’re not happy.”

Although van Dijk won the time trial last year, she reportedly was less than thrilled with the time she posted. She was more than a half-minute quicker on the same course in similar conditions this year.

“It’s always good to win, but sometimes you’re more satisfied with your performance than another time,” noted van Dijk. “This year was 32 seconds faster on the same course. I was much more satisfied.”

This is the fourth running of the Friday evening time trial in ‘s Heerenhoek, Holland – and the event has had only one winner. Van Dijk has stood on the top step of the podium in every edition of the race. It’s clear the course suits her.

“This course is not too long. It’s not too short. It has some corners so you can ride from corner to corner and it’s not like one long boring straight,” she explained. “That’s good that you have something to ride to and not that you have to think: ‘The next 10km is straight and what shall I think about?’ There’s enough to focus on, and there’s always enough wind there. I quite like the course.”

“Time trialling is something that I train for, but it’s not like the whole year I do time trial training,” van Dijk added. “I do try to ride my time trial bike regularly, but I don’t do specific efforts on it during the whole year – normally just before specific events. Because this was just after Fleche Wallonne and Energiwacht, I didn’t do anything specific yet, but for sure before the World Championships, the European Games and the Nationals, I will do more specific efforts.”

The Omloop van Borsele stepped up in rankings this year from a 1.2 to a 1.1 and now shares the same ranking as races like Strade Bianche and La Course. A higher classification translates to more points up for grabs at the finish. The race might have had a new ranking, but it had a very familiar winner. Kirsten Wild took advantage of a superb lead-out from her Hitec Products team to win her fifth Omloop van Borsele on Saturday.

“Every win is a special one with its own story,” Wild told Ella CyclingTips in a post-race interview. “Saturday was a nice one because we did it with the whole team. So no win is more special than the other. They are all different but nice.”

Although windy, weather conditions were unfavourable for a breakaway. The peloton would split in the crosswinds on each of the four laps of the 24km circuit, but the front group could not keep its chasers at bay when the wind direction changed. The headwind afforded the second and third groups on the road an opportunity to rejoin the elite selection after every split. A large bunch hit the local circuit together.

“This is a course mostly decided on the wind,” explained Wild. “I like those kind of races and I think I have a good feeling for it.

“I was always in the first part of the peloton when it split,” Wild added. “You never know if a team has the numbers and keeps the speed high. So for that reason I always try to be in the split.”

Several teams attempted to force an escape clear on the local circuits including Wiggle Honda, Orica-AIS, Parkhotel Valkenburg, Velocio-SRAM and Boels-Dolmans. The last attack came from Vera Koedooder (Bigla) just before the final 9.9km loop. Wild was the first to open the sprint. She put her head down and powered to the line ahead of Shelley Olds (Bigla), who returned to racing at Borsele following six weeks sidelined with a fractured rib. Anna Knauer (Rabo-Liv) rounded out the podium.

“It was the first time the team had a lead-out,” noted Wild. “We didn’t work in training, but around races we speak a lot about it.”

“I’m very happy with the result,” Olds said, referencing her second place finish in her team’s race report. “I still have some work to do. Today wasn’t totally perfect as I was still having pain in my back and ribs, and I know it’s going to take time to comeback but I am happy that I was able to race. I was able to stay in the front on this technical route and in the rain so I am happy with that.” Dwars door de Westhoek borrows heavily from the Gent-Wevelgem course. There are climbs and cobbles and multiple circuits in play. The peloton raced aggressively from the outset. The early climbs split the bunch before the race came back together heading into the local circuits.

Delzenne launched her attack in the first of four local laps. She slipped away alone with 44km still to race. She immediately opened up an advantage of nearly a minute – and although the gap would fluctuate between 30 and 90 seconds over the remainder of the race, the peloton was never able to Delzenne back. The French women crossed the line alone to take her first professional victory.

“I’m so happy to win and my first real victory!” Delzenne said in her team’s race report. “I didn’t really expect that I would be winning today before the race. I just thought that at the moment that I attacked it was good timing because the race had been aggressive early and directly after the intermediate sprint, I saw an opportunity. My teammates race well in the first part of the race, and I’m sure they were helping control it when I was away solo. I’m very pleased.”

Whilst she stood on the podium with her teammates at Energiewacht Tour, having won the stage two team time trial, Cromwell’s third place finish on Sunday was her first individual European podium of the season. With Delzenne up the road, Cromwell and her teammates were able to save their legs for the finish while other team struggled to close down Delzenne’s gap.

“The plan today was to save me for the sprint,” Cromwell explained to Ella CyclingTips. “We went in with that, which was cool. The team worked super well. Elise timed her move perfectly, and we support those sort of moves, too. It was either sprint or if we were in the position to win another way, that was great.”

“In the finale, when we knew Elise had the win, I had Barbie [Guarischi] look after me,” Cromwell added. “It was basically a race into the cobbles. It was a 750m cobble final with bricks on the side up to 200m to go. Wiggle did an awesome lead-out and Barbie put me right there. I had to fight with Kirsten Wild a little bit but managed to get onto Jolien’s wheel. It was basically just whoever had the legs to get the last bit because you couldn’t get out your seat in the sprint – and I had the legs, which was good.” 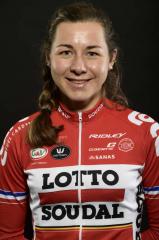