Having missed out via a fast finishing John Degenkolb in Milan-San Remo, Alexander Kristoff more than made up for the loss of his title as La Primavera champion when he powered to victory at the end of the Tour of Flanders.

The Norwegian Katusha rider reached the finish together with Niki Terpstra, and despite the Etixx-QuickStep rider deciding not to work in the finale, was able to easily beat him in the sprint to the line.

Greg Van Avermaet (BMC Racing Team) and Peter Sagan (Tinkoff-Saxo) had chased hard in pursuit but ran out of energy and time. Van Avermaet kicked hard in the finishing straight and managed to distance a fading Sagan, with the duo netting third and fourth. They were seven and 16 seconds back respectively, while Tiesj Benoot (Lotto Soudal) and Lars Boom (Astana Pro Team) were 20 seconds behind Sagan in fifth and sixth.

The win confirms Kristoff as one of the tough men of the sport; while Milan-San Remo often goes to the sprinters, taking Flanders is a different level altogether, particularly when his success came after a long breakaway move which held off the other race favourites chasing behind.

He and Terpstra pushed clear inside the final 30 kilometres, getting a gap after the Kruisberg and working hard together to build their lead. Panic set in behind, leading to some hard chasing, but the leading duo had plenty left in the tank and eked out a 30 second lead as they hit the base of the Kwaremont with 18 kilometres left to race.

On that climb Geraint Thomas (Sky) attacked, followed by Terpstra’s team-mate Zdenek Stybar, but several other riders bridged across after the summit and the momentum went out of the chase.

Van Avermaet realised things were slipping away and started his own chase on the final climb of the Paterberg. He was joined by Sagan and together the duo chased hard. However despite Terpstra deciding to sit on inside the final two kilometres, they were not able to get back on terms and had to instead battle it out for the final step on the podium.

“It was my main goal for this part of my season,” said a content Kristoff in the post-race press conference. “Especially with the win the feeling is really great. I am really happy.”

He admitted that he thought the move was a little early but felt he didn’t have much of a choice. “I did not want to let Terpstra go away because who was going to close it?” he explained. “He was really strong, in the start he worked really a lot and we got the good gap.

Kristoff knew that Van Avermaet and Sagan were chasing hard but came up against Terpstra’s decision not to keep riding in the final two kilometres. He said that he had to decide what to do under those conditions.

“I tried not to go really full gas in the last two kilometres, just save a little bit so I had something left for the sprint. It was enough. It was a great feeling when I saw he couldn’t pass me.”

The outcome meant that Kristoff became the first from Norway to win the race. The success adds to his victory last year in Milan-San Remo. What’s doubly impressive is that he dominated this week’s Three Days of De Panne, winning the three road stages, netting a fine third in the final time trial and sealing overall general classification success.

Landing victory in Flanders continues that momentum, and means that all eyes will be on Kristoff for next week’s Paris-Roubaix.

As for Terpstra, Van Avermaet, Sagan and the other riders, they will be even more motivated to try to hit the line first and thus bounce back from the disappointments at the Flanders finish in Oudenaarde.

Blue skies greeted the riders at the start of the 2015 Tour of Flanders in Brugge, with large, passionate crowds also gladdening the spirits in advance of the six hour-plus battle ahead.

The attacks commenced soon after the drop of the flag and with approximately 20 out of 264.2 kiloemtres done a break of five scurried up the road and set about establishing a large lead.

Trek Factory Racing strongman Jesse Sergent was there, ensuring the team had a presence on the TV despite the loss of Fabian Cancellara, and also taking the pressure off his fellow riders behind. Ag2r’s Damien Gaudin was also there, as was former Irish champion Matt Brammeier (MTN-Qhubeka), Roompot Oranje Peloton’s Dylan Groenewegen and Ralf Matzka of Bora Argon18.

After 34 kilometres of racing the intermediate sprint in Sint-Eloois-Winkel took place and there Brammeier was first to the line, winning the rather unique prize of his body weight in beer.

The quintet were joined after approximately 47 kilometres of racing by two others, namely Lars Ytting Bak (Lotto-Soudal) and Marco Frapporti (Androni). The septet worked together to open their advantage to almost seven minutes by 60 kilometres, just before the village of Zwevegem.

However the peloton picked up the speed and that lead started to be whittled away.

Racing was nervous behind and Sky’s Bradley Wiggins came down. He hit the deck before the first time up the Oude Kwaremont and had a couple of bike changes, throwing his machine to the ground in disgust. Once he was back in the fold his team-mates resumed pace-setting, trying to reduce the break’s advantage.

Behind, several short lived attacks were fired off. Lotto-Soudal’s Andre Greipel was particularly aggressive. However the biggest story was the driving of the Shimano neutral car which, when trying to overtake the break, pushed forward at completely the wrong time and clattered Sergent.

He was hurled to the ground and broke his collarbone, ending his race.

The six other riders in the break pushed onwards but their gap was down to three minutes and looking increasingly fragile.

The Shimano support’s driving came under scrutiny once again when another car rammed into the back of the FDJ team car when it was about to service one of its own riders. The impact shunted the team car forward and into the rider, who also hit the deck as a result.

Up the road, Bak and Gaudin were feeling good and pushed ahead of the other breakaway riders on the Kaperij climb. Behind, Greipel was once again creating sparks with some surges, although he wasn’t yet able to gain substantial ground.

The break was finally hauled back just inside 50 kilometers left, Gaudin the last to surrender. Greipel fired off again before the Koppenberg and opened some daylight, but was hauled back after the summit. Astana’s Alexey Lutsenko then made his own move inside the final 40 kilometres and built up a half minute advantage.

Greipel and Sylvain Chavanel (IAM Cycling) tried to bridge but were unable to do so. Lutsenko was hauled back with just over 30 kilometres remaining, prompting a number of attacks including a move by Van Avermaet.

Although it was unsuccessful in staying away, that surge whittled down the list of contenders and softened up those who were still in the running. Just over 20 riders remained in contention and this prompted Terpstra to make a move after the Kruisberg.

Kristoff spotted the danger and got across to him, and together the duo knuckled down to establish what was a race-winning break.

Kristoff was clearly the danger man for the sprint and while Terpstra tried to conserve as much energy as possible by sitting on close to the finish, he was still no match for the Norwegian sprinter 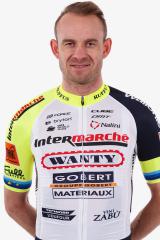