Melton CiCLE Classic: the UK’s answer to the cobbled classics

The Melton CiCLE Classic mightn’t be the most famous bike race in the world, but what the UCI 1.2 race lacks in worldwide recognition it more than makes up for with British charm. Inspired by the likes of the Tour of Flanders and Paris-Roubaix, the Melton CiCLE Classic was held for the 11th time this past weekend with Australia’s Steele von Hoff (NFTO) taking out the title. Writer and photographer Jack Chevell was on hand to capture all the action for CyclingTips.

Looking out over the countryside, you could be fooled into thinking you were in East Flanders. Neatly divided fields, pockets of woodland, farm buildings and church spires roll over gentle hills in every direction.

On the top of this particular hill, in the English county of Rutland, the illusion is even more convincing. A Lion of Flanders is flying above a small crowd gathered at the side of a narrow exposed road and beers are being drunk from an ice box in the back of a car.

The Melton CiCLE Classic was first run in 2005 and has grown rapidly over the years. Colin Clews, the man behind the race, was inspired by the great continental Spring Classics and sought to recreate them on his home roads in Leicestershire and Rutland. What started as a local club race organised by friends, is now one of the UK’s biggest single-day races.

Last year it was granted UCI Europe Tour status and now attracts teams from all over Europe. After two laps of a nearby reservoir, the race focusses on a compact area, making multiple visits to gravel and dirt road sections and narrow, poorly surfaced climbs. In homage to the famous Flemish climbs which inspired the race, these sectors are given a ‘berg suffix. Somerberg, Cold Overton Berg and Burrough Berg have now completely replaced the original road names in the minds of teams, riders and spectators.

The most popular section of the race is the dirt and gravel road through Manor Farm Feeds in the hamlet of Owston. For the rest of the year it is a working farm and animal feed wholesaler. On race day however, the farm and village are transformed with a beer tent, barbecue and thousands of spectators taking in the party atmosphere.

The race passes through the village four times. This year, as another nod to the Ronde, a local brewery has offered, to the rider who takes a prime sprint on the second passage, the rider’s weight in beer. In order to celebrate a local delicacy and maintain the race’s unique identity, ‘Ye Olde Pork Pie Shoppe’ of Melton Mowbray has also offered a specially commissioned pork pie to whomever passes their shop first.

A short ride from the Manor Farm Feeds section is a badly surfaced dirt climb known as The Somerberg. A main road funnels into a small single lane track and the racing is often aggressive to get into this section at the head of the race. The race passes over this exposed stretch of farmland twice in different directions and it attracts a good crowd.

A thick cloud of dust hangs in the still air as the first motorcycles pass. Two riders have attacked off the front of the race and are being choked in the wake of the official vehicles. Crouching by the road with dust crunching between my teeth, I’m reminded straight away of Paris-Roubaix. Instead of the ground-shaking rumble of the cobblestones though, it’s the clank and bang as rocks strike carbon rims that is most audible.

Punctures are very common, even more so than on French and Belgian cobbled roads. Riders struggle to recover and some are forced to ride whole sections on flat tires as there is no neutral service in this race. The teams have stationed staff at the busiest sections and they wait to help stricken riders.

On my way down The Somerberg, I too fall victim to the rough roads and have to repair a puncture before continuing to Melton Mowbray for the finish.

By the time I get there, big crowds have gathered at the line, and a brass band is playing on the stage. Here, the illusion that the smallest county in England has been transported to Flanders is finally shattered. Familiar British high street shops and architecture crowd out the solitary Lion of Flanders which has made its way to the finish.

The race is coming to an exciting conclusion, however. Repeated attacks go away in the last kilometres but are all brought back; for the first time in its 11-year history, the Melton CiCLE Classic will come down to a bunch sprint. At the finish Australian NFTO rider Steele Von Hoff is the strongest, despite later admitting he thought the sprint was for fifth.

The sun is still warm at the finish area and the post-race atmosphere is relaxed. Riders chat easily with one another and some are enjoying ice cream. Those who will be visiting the podium are attended to by soigneurs. A thick layer of dusty and grime is wiped from their faces, legs and shoes. Following a short podium ceremony and prize presentation the 2015 Melton CiCLE Classic is over and the wait for the next one begins. 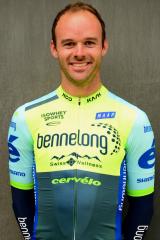 Riders assemble for the start in Oakham. Looking for grip on the loose surface. Madison Genesis rider sprints to win his weight in beer. After a drivetrain issue early in the race Steele von Hoff worked his way back into the peloton. A Lion of Flanders and an Irish flag for the CRC An Post team. The breakaway at the summit of The Somerberg. The peloton takes one of the dusty sections. The dust is particularly bad for anyone caught in the cars. At the finish, Steele Von Hoff didn’t realise he had won. Cold drinks in the sunshine for the winner. His partner Emma Weir can be seen here in the background. Dusty faces at the finish.