Weakening unexpectedly on the Colle delle Finestre and being distanced by his main general classification riders, Alberto Contador put in a brave fight to limit his losses and to hold the Maglia Rosa on the penultimate stage of the Giro d’Italia on Saturday.

Contador lost time from there until the finish at the top of Sestriere, but had more than enough of a buffer to stay at the top of the overall standings and to – almost certainly – seal his final win on Sunday.

Best once again was the Astana leader Fabio Aru, who attacked on the final climb and soloed to his second consecutive stage win. He too had been in difficulties at times on the Finestre, including when his team-mate Mikel Landa attacked and got clear, but rallied towards the summit.

Contador’s moment of crisis came close to the top when Ryder Hesjedal (Cannondale-Garmin) attacked in a bid to get up to Landa plus the rider who had been out clear alone, Ilnur Zakarin (Katusha).

Hesjedal’s surge saw Rigoberto Uran (Etixx-QuickStep), Steven Kruijswijk (LottoNL-Jumbo) and Aru go with him; these riders teamed up on the descent to catch the two leaders by the start of the Sestriere ascent, but Contador rode strongly in the valley to prevent them gaining too much time.

He hit the base of the climb less than a minute back and then dug in to prevent this rising too much. Aru got a second wind and jumped hard with just under two kilometres left; Uran initially went with him, but was unable to follow when the Astana rider surged again and was then passed by Hesjedal before the summit.

The latter rolled in 18 seconds behind Aru, with Uran and Landa at 24 seconds and Kruijswijk a further ten seconds back.

“It is incredible. I can’t believe it still after having had a few bad days and suffering,” he said. “Of course today, managing to win again, it’s absolutely wonderful. Getting that second place makes me really happy.

“There were so many fans encouraging me along the roadside that it was like being at home. We worked at the front all stage. Landa was very strong, and he has done exceptional work for the team these days.

“I suffered a lot on the Colle delle Finestre but then rejoined Mikel on the descent. This is my second stage win in two days and it still hasn’t sunk in, especially after so many days of suffering. I come to Sestriere to train, and I’m very attached to the town, so this win is special for that reason, too.”

Contador raced in two minutes 25 seconds back. He knew he had won the Giro but his celebrations were muted; he may have the pink heading into the last day but it is not the way he imagined it to be.

He ended the day two minutes and two seconds ahead of Aru and three minutes 14 seconds up on Landa. Andrey Amador (Movistar) was distanced on the Finestre but holds onto fourth; Hesjedal continues his rise and goes from seventh to fifth, bumping Konig down a place. Kruijswijk also gains two slots and moves to seventh.

“Today was not a great stage for me,” admitted Contador. “I wasn’t feeling good, probably because of the accumulated effort, but I knew I had a good cushion in the general classification and, even though there were plenty of kilometres to go before the finish, I preferred to ride at my rhythm.

“There was never a moment when I thought the jersey was in danger. I maintained my calm because I knew that the difference in speeds between the groups was going to be small. We’ll have a good dinner tonight, although I have to watch my weight for the Tour. This Giro d’Italia is in the bag now, with just tomorrow’s stage to come, so I’m already thinking of my next target.”

The 196 kilometre 20th stage of this year’s Giro was both the penultimate stage and also the final one in the mountains. It was very much a stage of two halves; the first 120 kilometres were mainly flat, but from there the road started to inch upwards before hitting the base of the first of two big peaks, the Colle delle Finestre.

Starting at kilometre 148.1 and topping out at kilometre 168.4, the unpaved ascent would both test the riders’ skills and also provide unique opportunities for the photographers and TV crews covering the race.

After a descent of just over ten kilometres the road reared up again, climbing for 16.1 kilometres to the summit of Sestriere. It was seen as the final chance for Alberto Contador to take a stage win, and also for his general classification rivals to try to get some time.

They built a lead of two minutes before the 50 kilometre point. This advantage then oscillated between that and one minute 30, but finally approached three minutes soon after Boem took the intermediate sprint at kilometre 97.

The peloton then accelerated and pegged it back to one minute 44 with 60 kilometres left. The Tinkoff-Saxo squad of race leader Contador was doing much of the riding but was aided by LottoNL-Jumbo, which was riding for Kruijswijk’s blue jersey aspirations.

FDJ also joined in and by the time Berlato jumped at the base of the Finestre, it was down to under 50 seconds.

Zakarin dropped the others in the break and caught Berlato inside the final 42 kilometres. He pushed on ahead, with Pirazzi and Izagirre chasing behind.

Fireworks on the Finestre

Zakarin was showing the same sort of form that won him the Tour de Romandie and pulled further and further ahead. He built a lead of a minute and a half over the Contador group, but the latter bunch started coming under pressure when Tanel Kangert (Astana) opened hostilities behind.

While the main riders were able to follow this, it caused Contador’s final remaining team-mate, Michael Rogers, to be dropped.

With 35 kilometres left Zakarin had a minute and a half. Hesjedal was one of those trying to go clear behind, but Kruijswijk then took over the pace setting in a bid to distance his mountains jersey rival, Intxausti.

By the time Zakarin reached the 31 kilometre to go point, Landa had decided to try his luck and jumped hard. He immediately got a gap over the others, with Contador not trying to go with the rider who had started the day third overall.

Landa’s Astana team-mate Aru was initially dropped but clawed his way back to the group. Hesjedal then tried to go clear but Kruijswijk then brought the others back to him.

With 30 kilometres to go Landa was just 14 seconds behind the leader and getting ever-closer to him.

Hesjedal had been unable to break the elastic but put in another surge. Suddenly things unravelled for Contador; Uran, Kruijswijk and Aru got up to the Canadian, while the Spanish race leader couldn’t follow and was gapped.

Landa caught Zakarin just before the summit, taking the Cima Coppi award, and starting the descent with the Russian. Hesjedal and Uran went over just over 30 seconds back, with Aru just behind them. The GC battle was on.

Contador was looking increasingly frail and reached the prime line one minute 26 seconds behind Landa and Zakarin and almost a minute behind Hesjedal, Uran and Aru.

With 20 kilometres left Kruijswijk got up to Aru, Hesjedal and Uran. Contador was still alone and was a minute and a half behind Landa and Zakarin and 51 seconds behind the Aru group.

Unlike those ahead of him, he was completely alone and thus had no help on the descent, making his task a tough one.

With 11.8 kilometres left Landa and Zakarin were 45 seconds ahead of the Aru group. Contador was riding well alone, though, limiting his losses to one minute 33, but there was still the final climb to cover. With Hesjedal, Uran, Aru and Kruijswijk working together he was facing a huge task to try to hang on.

Inside the final nine kilometres Aru’s group caught the leaders as the road started to pitch upwards. He, Landa, Zakarin, Uran, Kruijswijk and Hesjedal were together in one cluster, while behind Contador had been joined by Astana’s Tanel Kangert, who was sitting on his wheel.

The Maglia Rosa appeared to be recovering somewhat from his crisis. With eight kilometres to go he had cut the gap down to 51 seconds; 50 seconds further back a group containing Leopold Konig (Sky), Andrey Amador (Movistar) and others were chasing.

Zakarin was dropped with 5.6 kilometres left. Contador had slipped back to one minute 15 back, while the Amador group was one minute 47 seconds down.

It was looking clear that Contador wouldn’t get back up to the leaders, but his ability to limit the gains meant that his pink jersey was looking relatively safe. Still, Aru and Landa drove their group onwards, hoping to be able to do enough to win the race.

With 1.9 kilometres left Aru attacked in pursuit of the stage win. Uran chased and got onto his wheel, but Aru kicked again with 1.6 kilometres left and got a gap. He was riding for what would be his second consecutive stage win and was fired up by the thoughts of taking second overall and – possibly – getting close to pink.

With one kilometre to go Aru was all alone and one minute 46 ahead of Contador. He raced onwards to grab his second stage win of this year’s race, crossing the line arms pumping.

Hesjedal got clear of the others for second, rolling in 18 seconds back, while Uran and Landa took third and fourth, 24 seconds down.

Contador went under the kite but had time on his side. He crossed the line two minutes and 25 seconds down, saluting the crowd and then rolling in with one fist slightly raised. He didn’t get the stage win he wanted, but the overall victory is almost certainly his.

The Giro d’Italia concludes Sunday with a flat, fast 185 kilometre race from Turin to Milan. The remaining sprinters are expected to step forward for their final chance of glory, while Contador will try to stay out of trouble and bring home the seventh Grand Tour win of his career. 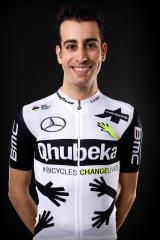