Further padding his lead over his main rival Fabio Aru (Astana), Alberto Contador finished third on the stage to the Madonna di Campiglio on Sunday, tightening his grip on the Giro d’Italia’s pink jersey.

Contador finished five seconds behind Aru’s team-mate Mikel Landa at the top of the famous climb, with the Katusha rider Yury Trofimov picking up second, two seconds back.

The quartet had battled each other for the stage lead, with Landa and Contador being particularly prominent. Trofimov surged during a lull and looked set for the win, but Landa attacked and came past him for the victory. Contador sprinted for third against Aru and both took that time bonus and also opened up a one second advantage by the time he hit the line.

“It’s an important win for me and the team, because when you work the way we have today, a win like this belongs to everyone,” said Landa. “There were three of us, we had numerical superiority, and we couldn’t let the stage win get away.

“Our objective is to put Aru in the best possible position in GC. We want first place with him, but we know it is difficult. Second place looks fairly safe, and we’ll try to win this Giro using our superiority in numbers.”

Contador had made a big effort in Saturday’s time trial, arguably digging deeper than the two riders ahead of him at the finish on Sunday, and was primarily concerned with Aru. The time gained puts him now two minutes 35 seconds ahead in the general classification Movistar’s Andrey Amador gave up 42 seconds to the stage winner Sunday and 37 seconds to Contador, but remains third overall.

Trofimov completes the top six but is just two seconds shy of seven minutes in arrears.

Contador was asked if he is the big boss of the race, and answered that it was not for him to judge.

“Am I the patron of the Giro? I don’t know. You are the ones saying so,” he said. “I can only dedicate myself to giving the best of myself.

“Astana were very strong today: it was like a team time trial with me on their wheel. But my legs were good today and I would have liked to win the stage, thinking of Pantani, who was an inspiration for me. But there were lots of attacks and counterattacks and it was impossible to control all of them.

“I didn’t speak to Landa, but there was no need to. He’s a great rider, he’s riding a great race, and I’m very happy for him.”

Coming one day after the mammoth 59.4 kilometre time trial, the riders would have welcomed the race’s second rest day. However the Giro organisers had one more sting in the legs in store; the first big Dolomite stage of the race, running 165 kilometres from Marostica to Madonna Di Campiglio.

Finally a move went clear and from this three leaders emerged, namely Movistar’s Giovanni Visconti, his team-mate Benat Intxausti and Ilnur Zakarin of the Katusha team. They were joined after the summit of the Fricca climb by a number of others including Tinkoff-Saxo’s Sergio Paulinho, Astana’s Diego Rosa, the Ag2r La Mondiale duo of Herbert Dupont and Matteo Montaguti plus Sky’s Kantsantsin Siutsou.

This group wasn’t working efficiently and Visconti, Siutsou, Dupont and Bookwalter pushed forward, although the latter soon lost his place in the move when the roads titled upwards again. Visconti led them over the Ponte Arche climb, but later he and Visconti were called back to play team roles. Dupont was the only one to persist and he took the last intermediate sprint ahead of an attacking Contador.

The latter picked up two seconds for his surge and further padded his lead over Aru. The Astana rider and his team were determined to try fight back and lined things out heading onto the last climb of the day. Landa subsequently attacked and while Contador came around him and put in his own surge, he was unable to shake him off. Aru and Trofimov got back up to them and the latter then took them by surprise when he jumped in search of the stage win.

Landa had more left in his legs, though, and was able to come around him for the win. Contador won the battle with Aru for third, nabbing another time bonus and stretching his lead to two minutes 35 seconds. He consequently heads into Monday’s second rest day with a big psychological advantage. There may be plenty of racing left ahead, but he is very much in the driving seat at this point in time. 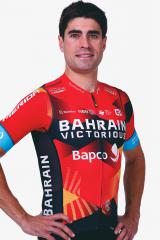