Attacked by several of his main rivals on the summit finish to Campitello Matese, Alberto Contador resisted the assaults and managed to maintain his race lead in the Giro d’Italia on Saturday. The Spanish Tinkoff-Saxo rider marked moves by Fabio Aru (Astana) and Richie Porte (Sky), but chose not to respond when Aru’s team-mate Mikel Landa surged on the final climb.

That kept Contador in the Maglia Rosa, despite clear discomfort from the shoulder injury he suffered two days earlier.

In fact, he managed to extend his overall lead, as the Tinkoff-Saxo rider earlier picked up a two seconds time bonus in an intermediate sprint.

“I was looking for a stage win, and today was a good possibility,” said Intxausti. “I was in a breakaway with good riders. There were lots of attacks on the final climb, but mine was the one that stuck. I had good legs all day.

“I waited until four kilometres to go, then gave it 100%. My team car kept me informed of the gap, and I had faith in my legs. I love the Giro: I’ve now won two stages and worn the Maglia Rosa for a day. There’s lots of racing left, and I hope the team continues this good run.”

Contador has passed a major hurdle and will take consolation from the fact that he has managed to defend his lead despite having a painful shoulder injury. Not only that, the time bonus gained helped him pad his lead, albeit by a small margin.

“My team was working hard at the front, and I saw the opportunity to gain two seconds in the intermediate sprint so I took it,” he said.

“Two seconds are two seconds: in a time trial, you suffer a lot to gain two seconds.”

Contador has never relinquished a race lead in a Grand Tour once he has moved to the top of the general classification, and it is likely that taking the time bonus was partially related to the knowledge that rivals such as Aru were likely to use the final climb to mount an all-out assault on his Maglia Rosa.

“On the final climb, I knew that Aru and Porte would attack and I responded,” he said. “I wasn’t comfortable on my bike, as you could see, but I got through the day and I’m happy.

“I’m sleeping with my arm immobilised, and I have to remember that I have the injury, and not make any brusque moments. I hope I’m OK for the time trial, which could be difficult for me. Astana is looking very strong, but I think that time is on my side.”

The eighth stage covered 186 kilometres from Fiuggi to Campitello Matese and looked set to shake up the general classification due to its tough parcours. Starting with undulating roads, the riders would scale the second category climb of Forca d’Acero [km 80.7], then cover more rolling roads prior to the final first category ascent up to the finish. This was a 16 kilometre climb and would give ample opportunity for Contador’s rivals to test his grip on the pink jersey.

They might have stood a chance but a split in the peloton behind caused the front half to race flat out, seeking to distance the gapped race leader Contador. However the Spaniard was able to get back to the front and then pushed forward to nab two bonus seconds at the first intermediate sprint.

This saw his overall lead over Fabio Aru (Astana) rise from two seconds to four and gave him a little more confidence about defending his lead.

LottoNL-Jumbo rider Steven Kruijswijk seized his chance and got clear. A group tried to get across but their chasing was ineffective and instead the duo of Carlos Betancur (Ag2r La Mondiale) and Androni’s Franco Pellizotti jumped clear and managed to bridge. Kristof Vandewalle (Trek Factory Racing) saw the opportunity and also got across.

This quartet built a lead of almost ten minutes, making it possible for them to stay clear until the end. Pellizotti slipped back but the other four continued to push onwards.

Heading onto the final climb, the leading trio were slightly under one and a half minutes clear of a chase group containing Pellizotti.

Betancur then attacked inside the final twelve kilometres. Kruiswijk was strong enough to get across and then made his own bid, getting a gap.

Going under the five kilometre to go banner, Kruiswijk had just 32 seconds. IAM’s Sebastien Reichenbach and Movistar’s Benat Intxausti came from behind and caught Vandewalle. Astana continued to pile on the pressure and then, going under the same banner, Aru attacked.

He was followed by team-mate Mikel Landa, and then Contador, Porte and Rigoberto Uran (Etixx-QuickStep) got across.

Landa attacked and the others didn’t respond. Instead, their decision not to chase enabled others to get back and Sky’s Mikel Nieve and Leopold Konig started setting the pace.

Intxausti caught the leader and then attacked hard. He pulled clear and rode hard to try to maintain as much of his advantage as was possible; behind, Landa was chasing hard, knowing that both the stage win and the overall lead were on offer.

With two kilometres to go Intxausti remained solo, one minute and four seconds ahead of the Contador group and with Aru and the other chasers in between. The 2004 race winner Damiano Cunego (Nippo-Vini Fantini) then attacked and got a gap.

Aru jumped hard and Porte was the first to respond. Contador was on the Australian’s wheel, with Uran just behind him. The surge caught Cunego, who drifted to the back of the group. Porte was next to go, jumping but being marked by Contador and the others.

Porte went again and Contador covered him, but was grimacing in doing so. Out front, Intxausti raced in for the victory, waving his arms in celebration. Landa was next to finish, crossing the line 20 seconds back. Reichenback was third, while behind Aru led Contador, Porte, Uran and Cataldo in. 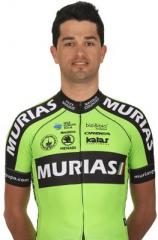