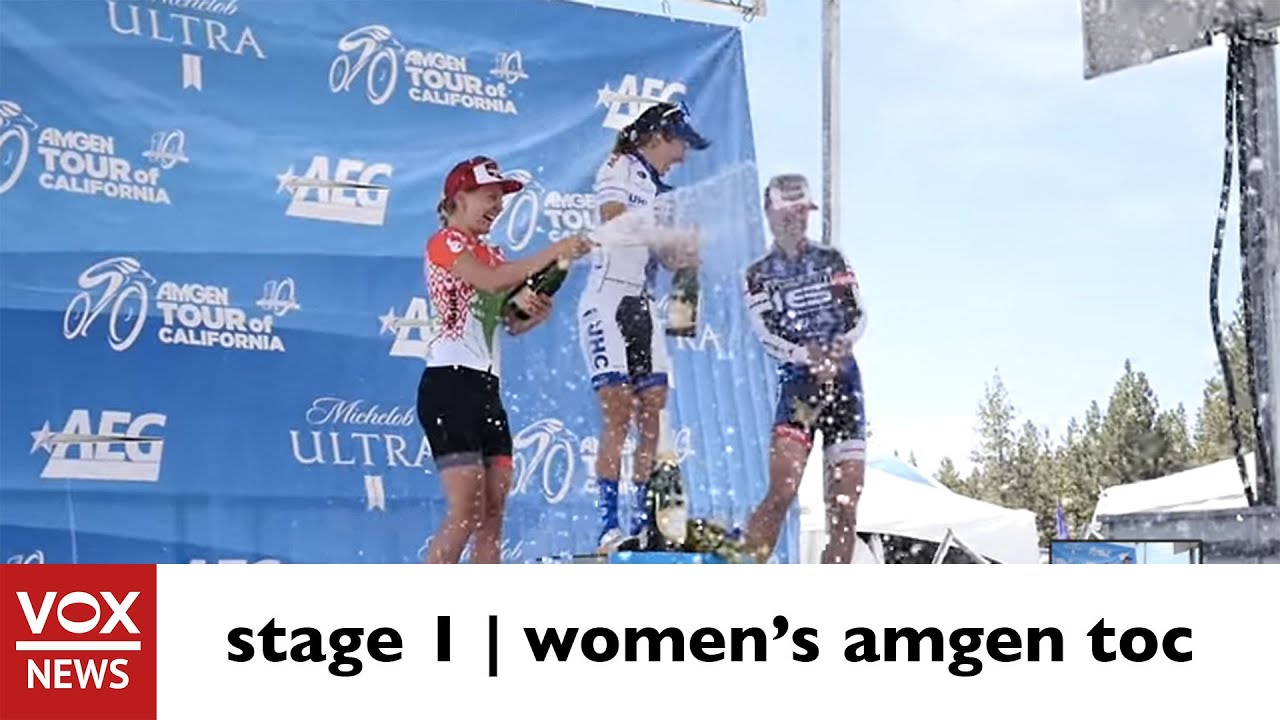 Katie Hall (UnitedHealthcare) won the opening stage of the 2015 Women’s Amgen Tour of California empowered by SRAM, out-climbing Alena Amialiusik (Velocio-SRAM) and Lauren Komanski (Twenty16-Sho-Air) at Heavenly Mountain Resort in South Lake Tahoe on Friday. The 28-year-old sprinted out of a small bunch to win the 120km stage and pull on the race leader’s jersey of the first edition of the women’s race.

Hall had a breakout ride at the Tour of the Gila last weekend where she finished second on the final stage to overall winner Mara Abbott (Amy D Foundation). The stage result propelled Hall up from fourth overall to second overall. Hall was thrilled with what she then called her season-best results – and her first NRC podiums. And today she climbed onto her first UCI podium.

“I feel really ecstatic,” Hall told Voxwomen in the video above. “This is a really big win for me. This is my home state, and I absolutely love Tahoe. Racing here and getting the win is really exciting.”

Sarah Storey (Pearl Izumi) proved the day’s biggest animator. The Paralympic gold medallist escaped with Kirsti Lay (Canada) just before the first queen of the mountain (QOM). Storey took top points in the QOM competition and continued on alone when Lay fell back to the bunch. Several teams sent riders up the road in an attempt to bridge across to Storey. Allison Beveridge (Canada) was the only rider able to make the junction.

“The race was aggressive pretty much all day,” Ella columnist Loren Rowney (Velocio-SRAM) told Ella. “Once the two riders were out front, teams were launching left, right and centre to bridge. It was a lot of bam, bam, bam.”

Storey and Beveridge collaborated to grow their gap to 1:55 at the mid-point of the stage. That was enough for Velocio-SRAM to put riders on the front to peg back the escape.

“I covered a lot of the early stuff, just trying to be present,” explained Rowney. “When [team captain] Lisa [Brennauer] made the call to chase, that’s when she and Barbie [Guarischi] came to the front. We saved Karo [Karol-Ann Canul], Alena [Amialiusik] and Trixi [Worrack] for the finale.”

“We went to the front with about 50km to go,” Rowney added. “The gap had blown out to two minutes almost, and no other team seemed interested in taking control, which I guess we could have expected. We have come in as the favourites and with that comes responsibility.”

Storey edged out Beveridge for maximum QOM points on the second QOM, earning the polka dot QOM jersey for the effort. Just past the QOM line, the leaders were swallowed up by the reduced bunch.

“There was a ton of action in the last ten kilometres,” Rowney said. “It was super fast, so nothing was going to stick.”

The final climb up to Heavenly Resort was steep enough to cause a selection. Ten riders hit the last kilometre together. A further selection took place in the closing metres with only four riders battling it out toward the line. Hall proved quickest on Keller Street to become the first winner of the first Women’s Amgen Tour of California stage race.

“It was an incredible day out,” said Rowney. “The scenery, the people along the course and the finish were all really cool. We rode up this final steep berg with a snowcapped mountain in the foreground and people screaming from the sidelines. It was just spectacular. I haven’t ever raced in such a picturesque location.”

“Amgen and SRAM have done an amazing job of promoting this race,” Rowney added. “I hope the race grows into a week long race fairly quickly here.”

Fun fact of the day: According to multiple sources on Twitter, the Amgen Tour of California technical crew removed a bear from the course.