Kirsten Wild (Hitec Products) successfully defend her overall title at the Tour of Chongming Island on Friday. The winner of stages one and two, Wild rounded out the top ten on stage three, reserving her firepower for the weekend World Cup.

WE DID IT! Won the Tour of Chongming Island! Big thanks to my team @Hitec_Products ! Couldn't had won without them!!

Roxane Fournier (Poitou-Charentes.Futuroscope.86) won the final stage in Chongming ahead of Annalisa Cucinotta (Alé Cipollini) and Iris Sachet. The Frenchwomen jumped up to second overall, eight seconds behind Wild, while Cucinotta snagged the final spot on the general classification podium. Rain began to fall ten minutes before the start of the 83km stage.

“The forecast had predicted thunderstorms all morning,” said Nettie Edmondson (Wiggle Honda). “We actually thought we were going to get away without rain because it had been dry up to the start. We really bore the full brunt of it during the race.”

The rain made for a slippery circuit, and unsurprisingly a few riders found themselves on the wet pavement during the two-hour race.

“We all train and race in Europe in the rain,” Edmondson noted. “It’s not that big of a deal. The only thing that’s different here is that we’re not exactly sure how to used the rain everyone else is – because this is a slightly different peloton than the standard European peloton. You have to be careful about the wheels you’re around. You can’t just worry about your own brakes. You have to worry about the brakes of the girls next to you, too.”

“There were a few crashes after the first intermediate sprint,” Edmondson added. “I was actually a bit surprised that there weren’t even more.”

As usual, the biggest action during the stage came with the intermediate sprints. Edmondson’s teammate Giorgia Bronzini had started the stage in second overall, and Wiggle Honda intended to keep her there. Other teams shared this interest in the general classification podium and fought tooth and nail for the seconds available on the sprints.

Bronzini missed out on the mid-stage bonuses, and Wiggle Honda turned their attention to the final sprint.

“We dedicated an entire train to Gio at the finish,” explained Edmondson. “We all formed a train, and we did our jobs perfectly. We had a plan, and we executed it completely.”

“Fifty metres from the line, Gio was on the front, but she lacks the weight on the downhill of some of the other bigger sprinters,” Edmondson noted. “She’s just too light for this sort of finish. Unfortunately she got rolled by three people in one hit.”

“Gio and Chloe [Hosking] were first and second with 150 metres,” Edmondson added. “We did everything right. There was nothing more we could have done. It just wasn’t the right finish for her. I think we already knew that, but she was second on GC and we wanted to defend that if we could.”

Missing out on the bonus seconds on the finish line, Bronzini slipped down to fourth overall.

“It was disappointing to lose second overall, but I think we all feel good about the way we went out there with a place and stuck to it,” said Edmondson. “We’ll just need a different plan for the World Cup on Saturday.” 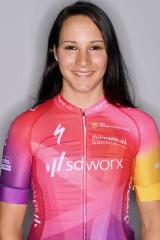 
Information out of the Chinese races is typically a bit hard to come by due to a variety of factors. Big thanks to Nettie Edmondson of Wiggle Honda for generously agreeing to daily phone calls to share insight into each of the four days of racing in Chongming.