Luis Leon Sanchez (Astana) was second on the stage, 12 seconds behind Kiryenka, while Alberto Contador (Tinkoff-Saxo) claimed the final step on the podium, a further two seconds down.

A day after being caught up in a crash and losing his overall lead, Contador is once again in pink after stage 14 having completed the course nearly three minutes faster than overnight leader Fabio Aru (Astana).

Kiryienka said that he wasn’t sure about the victory until the Spaniard came in. “It was a long, hard, nervous wait for Alberto Contador. It was close, but I had a good day, and some luck. I knew I’d lose something on the climbs, but it was OK for me.

“It was grey and wet, but it turned out be a beautiful day for me. I’ve waited a long time for a time trial win. Our boss said, this morning, Today we’ll win the time trial – he didn’t say who with. We haven’t had a lucky Giro: we’ve achieved some results here, and we will be in the running in the next Grand Tours.”

Contador wanted the Maglia Rosa back, but admitted he didn’t expect to take it by such a margin. “The result is a big surprise for me. I gave it all I had, and paced myself carefully all the way. I was faster than expected over the first part, but I saw that the flags had changed direction, so it was normal. And I overtook Landa before the halfway point.

“I now lead Aru by a good margin, especially after the fall yesterday, but I have to keep my head. The Giro is still long. Today has been a good day for us, and now we’ll take it day by day.”

On yet another rainy day at the 2015 Giro d’Italia the riders gathered in the town of Treviso, just north of Venice, for the race’s only individual time trial. At nearly 60km in length and with a considerable amount of climbing in the second half, it was destined to be a difficult day in the saddle for many of the riders.

As predicted, several of the fastmen abandoned the race before the stage began, with Andre Greipel, Greg Henderson (both Lotto Soudal) and Tom Boonen (Etixx-Quick-Step) all seeing little value in dragging themselves through the Dolomites for the last week of the race.

Several riders had the opportunity to spend some time in the hot seat in the early part of the stage 14 ITT with the lead changing hands several times. Former Australian ITT champions Michael Hepburn and Luke Durbridge (both Orica-GreenEdge) each had a stint in the lead, as too did Nikolay Mihaylov (CCC Sprandi Polkowice) and Patrick Gretsch (Ag2r-La Mondiale), before Vasil Kiryienka (Sky) stamped his authority on the stage.

Kiryienka’s average speed of 45.7km/h was enough to see him complete the course in 1:17:52, a time that would put the Belarusian atop the leaderboard for the remainder of the stage.

A change of wind direction in the second half of the day put the GC contenders at a disadvantage compared to the earlier starters. Richie Porte (Sky), was one rider at least partially affected by the new weather conditions, the Australian time trial champion reaching the 17.6km intermediate time check nearly two minutes slower than his teammate Kiryienka.

Porte would continue to lose time, falling to 3:23 behind after 35km, 3:51 down after 49.5km and finishing the stage 4:20 down on Kiryenka. He remains in 17th place overall, but is now nearly nine minutes behind the maglia rosa.

But Porte wasn’t the only pre-race favourite to finish well down the leaderboard. Rigoberto Uran (Etixx-Quick-Step) had been earmarked as a potential stage winner but completed the course 2:45 slower than Kiryienka, enough though to move from sixth to fourth in the general classification.

Mikel Landa (Astana) began the stage in third place overall but was quickly outclassed during the ITT. He was caught by his three-minute-man, Alberto Contador, in the first half of the course and would finish a minute later than Contador, slipping to seventh overall.

Contador himself showed no signs of discomfort from the shoulder injury he sustained back on stage 6, putting in one of the day’s most impressive rides. Completing the course in a time of 1:18:06 would see Contador take third place on the stage but, more importantly, he also put considerable time into his GC rivals.

Among them was Fabio Aru who rolled down the start ramp last as the overnight leader of the bike race. The 24-year-old looked laboured on the bike at times, in contrast with the smooth action of Alberto Contador, and eventually finished 29th, 3:01 slower than Kiryienka and 2:47 behind Contador.

As a result, Aru’s time in pink comes to an end after just one day, the young Italian dropping back down to second on the general classification, 2:28 behind Contador.

Costa Rica’s Andrey Amador (Movistar) was one of the big winners on the day, moving up from eighth overall to third after the ITT. Meanwhile a seventh-placed finish for Jurgen van den Broeck (Lotto Soudal) sees the Belgian leap from 11th overall to fifth on GC ahead of the hilly final week of racing.

Stage 15 takes the riders 165km from Marostica to Madonna di Campiglio tomorrow, finishing with a 15.5km climb at 5.9%. That stage will be followed by the race’s second and final rest day. 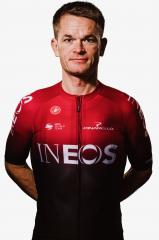