Profiting on a controversial day which saw the Astana team work to distance Alberto Contador after the race leader had a rear wheel puncture, Mikel Landa soloed to victory on stage sixth of the Giro d’Italia and took over second place in the general classification.

Former race winner Ryder Hesjedal (Cannondale-Garmin) was out front for much of the stage and hung on for a determined sixth place, two minutes and ten seconds down.

As for Landa’s team-mate Fabio Aru, who had started the day second overall to Contador, weakened badly after his Astana team pushed forward on the penultimate climb, the legendary Mortirolo, and was dropped before the top. He trailed in two minutes and 51 seconds back and may well have lost his chance of winning the race overall.

Landa readily admitted that Astana had sought to take advantage of Contador’s mishap.

“It was a beautiful day for me, even more than yesterday [Sunday],” he said. “We saw that Contador had a problem. Katusha rode full gas and we collaborated with them. On the Mortirolo. Fabio didn’t feel very good and he told me to go with Alberto and Kruijswijk.

“In the last few kilometres I saw they started playing a little bit for winning the stage. I tried and didn’t know I was so strong. It was a perfect day for me.”

Contador’s team weakened during the chase, with their lack of strength raising questions about the amount of work Tinkoff-Saxo did in the opening week of the race. The Spaniard was left chasing along and managed to claw his way back to Aru and Landa, then push forward tracked by the latter and to catch the lone leader Kruijswijk.

The trio went over the top of the climb together and then down the descent, with Landa then making his stage-winning move on the final rise up to the line.

Once the calculations were made, Contador ended the day four minutes and two seconds ahead of the new second-placed rider, with Aru now a further 50 seconds back in third place. Amador and Trofimov are fourth and fifth but, being five minutes 48 seconds and eight minutes 27 seconds down respectively, they are surely out of the hunt.

“It was a very hard day, an incredible stage,” said Contador. “Cycling isn’t mathematics: I had a puncture on the descent, Ivan Basso gave me a wheel, but ahead they were going at full speed, and it was impossible to close the gap immediately.

“It was hard for me, but I’m very happy with the time gaps now. I would have liked to have helped Steven Kruijswijk, but it was not to be. To Mikel Landa, I can only say: chapeau. These are the stages that people remember.”

Five more stages remain but unless Aru can turn things around again, the Giro looks to be a two horse race at this point.

Landa still has a lot of time to make up, though, and readily acknowledges that the sport is a very unpredictable one.

“Today I really proved that I can be one for the strongest riders on the climbs, and we still have several uphill finishes left. As a team, we will have to stick together and stay attentive, because what happened to Contador today could happen to one of us.”

After the antics of stage 16, though, Tinkoff-Saxo is unlikely to feel obliged to play fair if Astana has any mishaps.

The Giro d’Italia recommenced after Monday’s rest day with what was arguably the hardest stage of this year’s race. The 174 kilometre race from Pinzolo to Aprica featured five categorised climbs, including the ferocious Passo del Mortirolo.

Although this category one ascent peaked 34 kilometres from the finishing line, its severity plus the concluding third category climb meant that any splits at the top would be hard to close.

Of those, Hesjedal was highest in the GC, holding a deficit of 11 minutes 17 seconds at the start of the stage.

Sander Armée (Lotto Soudal) also bridged across, while Simon Clarke (Orica GreenEdge) was chasing hard. Behind, the chase was being led by Alberto Contador’s Tinkoff-Saxo team.

That group were just under one minute 40 seconds clear at the top of the second climb. This gap increased to two minutes 20 seconds and Clarke, who had worked hard to get across, was delayed by a mechanical issue.

With just under 80 kilometre left Hesjedal attacked. He built a two minute lead and tried to extend it further on then tried to build as big a lead as possible on the descent of the Aprica climb. Further back, Contador was running into trouble due to a rear wheel puncture. While the unwritten rules of cycling normally dictate that others shouldn’t take advantage of a race leader’s misfortune, Katusha and then Astana threw this sentiment out the window when they attacked.

Aru’s team didn’t try to hide what it was at; it put several riders on the front and together they worked to try to prevent Contador getting back on. They caught Hesjedal before the start of the Mortirolo and, going onto the climb, the race leader was almost a minute back.

He had a huge task ahead, not least because his team were a lot weaker than they had been when trying to control the first week of the race.

Pursuit on the Mortirolo climb:

With 46.5 kilometres remaining Contador was 45 seconds behind the Aru group and giving it everything on the day’s big climb to try to get back on terms. He was burning a lot of matches but, up ahead, Aru was weakening. His team-mate Landa, who had been setting the pace on the climb, had to ease back when the Italian lost contact with 41 kilometres left.

Kruijswijk was with the Astana duo and once Landa eased back he pushed onwards, hunting the stage win and also keen to try to move up from his 14th place overall.

Contador caught and passed Hesjedal and Trofimov, grinding his way up the sleep climb, then saw the Astana duo up ahead and got a new motivation boost.

He finally made the junction to Aru and Landa with 40 kilometers left on the clock. This junction caused a slight stall, enabling Trofimov to get back up the group. Hesjedal also got closer, while Kruijswijk’s lead had increased to 26 seconds.

Contador was keen to make a point to Aru and attacked hard. This caused the Italian to crack and he slid backwards. With that, the Astana team finally gave Landa a green light and he accelerated, quickly bridging across to Contador.

Undeterred, the latter kept pushing forward and they caught Kruijswijk with 39.1 kilometres left.

Aru had drawn slightly closer but the elastic then snapped for good and he was a full 28 seconds back with 38.3 kilometres on the clock. Trofimov went past the fading Italian rider and was joined by Hesjedal.

Aru’s losses continued to mount and as he went under the 35 kilometres to go banner, he was one minute and 22 seconds back and continuing to lose time. The three leaders continued to push on, with Kruijswijk doing plenty of work and near-naked fans running alongside the riders.

Those fans were not deterred by the weather, with flakes of snow starting to fall.

Kruijswijk went over the climb first, slightly ahead of Contador and Landa. Next over were Trofimov and Hesjedal, 55 seconds back. Aru went over one minute 52 down and had a load of chasing to do to try to minimise the damage.

Aru did reduce his deficit slightly on the descent but that momentum was abruptly halted when he suffered a rear wheel puncture. This put him one minute 40 seconds back at the foothills of the climb, and six seconds adrift of Hesjedal and Amador, who soon got up to Trofimov.

With 4.3 kilometres to go Kruijswijk attacked. Contador and Landa got across to him, then the latter jumped hard. Contador tried to mark him but was unable to do so; he and Kruijswijk settled into their chase.

Landa had been able to save his legs from the point Aru was dropped and was fresher than the other two. He went under the three kilometre to go banner with a considerable advantage and continued that momentum all the way to the line, celebrating his second stage win.

Contador led Kruijswijk towards the finish, with the latter then coming past before the line to bring them in 36 seconds back. Trofimov and Amador finished two minutes three seconds down, seven seconds ahead of Hesjedal, while Aru trailed in two minutes 49 seconds behind.

Five more days remain but in dropping to almost five minutes back, his chances of winning this Giro have all but evaporated.

The race continues on Wednesday with a much flatter 134 kilometre stage from Aprica to Lugano. 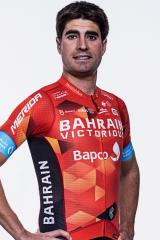