One day after Mikel Landa (Astana) became the first rider to notch up two stage wins in the 2015 Giro d’Italia, Sacha Modolo did the same when he was first to the line in Lugano on Wednesday.

The Italian benefited from a perfect leadout from his Lampre-Merida squad, being put in a strong position with 200 metres to go and then being strong enough to hold off a charge by Giant-Alpecin’s Luka Mezgec and a fast-finishing Giacomo Nizzolo (Trek Factory Racing).

The latter was moving quicker over the final 50 metres but ran out of time and had to be content with second place.

“On paper, the stage looked easy, but in reality it was hard, with a real ramp at four kilometres to go,” said Molodo. “I looked around me on the ramp and I saw lots of potential sprinters in difficulty. Perhaps they were more tired than me.

“Yesterday was very hard but I had good legs today and it was nice and hot – the sort of day I like. Perhaps we could do with one more rider but, after months of hard work, in Max Richeze and Roberto Ferrari I have one of the best lead-out trains going. I’m afraid of no one.”

The finale of the 134 kilometre stage from Aprica to Lugano saw a number of moves, including an impressive solo run by Adam Hansen (Lotto-Soudal). He initially pushed clear with Patrick Gretsch with 25 kilometres left and the duo were joined by BMC Racing Team’s Darwin Atapuma. However Hansen wasn’t happy with the collaboration and attacked alone.

He built a maximum lead of 20 seconds but the sprinters’ teams plus Alberto Contador’s Tinkoff-Saxo squad were determined to keep things under control. The Australian was caught just outside ten to go; with five and a half kilometres left Cannondale-Garmin’s Tom Jelte Slagter surged on a small hill.

He was soon joined by former world champion Philippe Gilbert (BMC Racing Team) but was caught and then passed by Luca Paolini (Katusha) under the three kilometre to go kite.

Paolini rocketed down the twisting descent into the city in a bid to stay clear but was caught with a little more than a kilometre to go. Modolo’s Lampre-Merida team then took over and worked hard to get their rider into the right place to blast home and take his second win of the race.

Overall leader Contador finished safely in the bunch and maintained his hold of the Maglia Rosa. He remains four minutes and two seconds ahead of stage 16 winner Landa and a further 50 seconds up on the latter’s Astana team-mate Fabio Aru.

“In theory it was a transitional stage but it was hard,” said the Spanish race leader. “The road went up and down, and we were riding into a headwind for most of the day. The peloton was very nervous, and it was fast, with the three-man breakaway up the road. So far, something has happened almost every day: a crash, a puncture.”

He’s feeling a hint of relief. “I’m very happy because I got through the stage safely and arrived in Lugano, where I live, on my home roads. Yesterday was much more wearing than I would have liked, but I’m one day closer to Milan.”

The race continues Thursday with a 170 kilometre race from Melide to Verbania. It is mainly flat for over 120 kilometres but the riders then scale the first category Monte Ologno before a long descent to the finish line.

Following Tuesday’s gruelling mountain stage over the Mortirolo, the riders were likely to take things somewhat easier on the flatter stage to Lugano. However both the breakaway riders and the sprinters were conscious that time is running out before the race finish on Sunday and they would jostle for the chance to go for the stage win.

Very early on three riders nipped clear, with Iljo Keisse (Etixx-Quickstep) defying his own pre-stage declarations that he would be too tired to try something. He combined with Giacomo Berlato (Nippo-Vini Fantini) and Marco Bandiera (Androni Giacattoli) and together these built a maximum lead of three minutes.

The teams behind chased and hacked this advantage down to a minute with 40 kilometres left. The erosion continued and the move was finally hauled back with 28 kilometres to go.

Adam Hansen (Lotto-Soudal) may be riding his 11th Grand Tour in a row but he still has the energy to aim for stage wins. He launched a move on a climb 25 kilometres out and was joined by Ag2r La Mondiale’s Patrick Gretsch. On paper it was an ideal collaboration but after Darmin Atapuma (BMC Racing Team) bridged across, Hansen decided he was better off alone and accelerated once again.

Holding his characteristic aerodynamic position, he hammered the pedals around and built a lead of twenty seconds. However the peloton was too strong and this was as much as he got; he was hauled back with just over ten kilometres to go, being brought back into the fold before the bunch crossed over into Switzerland.

Next to try was Cannondale-Garmin pro Tom Jelte Slagter, who surged with five and a half to go.

BMC Racing Team rider Philippe Gilbert recognised that the move could be a good one and bridged across. However Luca Paolini went past them with just over three to go and led the race down the snaking descent into Lugano.

The Katusha rider knows the roads well and tried to use that knowledge to good effect. However the bunch was too strong and he was reeled in with just over a kilometre to go. That set things up for the Lampre-Merida team and its fastman Modolo, who was able to hold off a quick-finishing Nizzolo plus Mezgec and nab his second win. 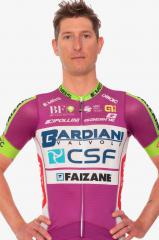