Nicola Boem (Bardiani-CSF) has taken an unlikely victory on stage 10 of the 2015 Giro d’Italia, winning the sprint from a four-rider breakaway on a day that seemed almost certain to finish in a bunch sprint.

Boem was part of a five-rider group that got clear in the opening kilometres of the stage; a group that, against all the odds, managed to survive until the end, albeit with one less rider than it started out with.

Alberto Contador (Tinkoff-Saxo) and Fabio Aru (Astana) finished on bunch time, the former preserving his overall lead in the race, while Richie Porte (Sky) had a mechanical in the closing kilometres of the race and lost 47 seconds on his GC rivals.

The result sees Porte drop from third overall to fourth and makes the stage 14 individual time trial even more important than it already was for the Tasmanian.

“We were targeting a stage win at this Giro, and it has come in the flattest, most unlikely stage,” said Boem. “We worked together and with 20km to go we had a good advantage. With 1.5km to go, Alan Marangoni attacked. I knew I couldn’t let him get away so I just gave it everything.

“I dedicate the win to my team-mates, who are probably even happier than I am, and to my girlfriend Federica, who has believed in me and encouraged me every day at this Giro.”

The Maglia Rosa, Alberto Contador, said that Porte’s time loss was unfortunate but not hugely significant. That was however before some later controversy.

“It was anything but an easy day. Every day at the Giro can hold surprises in store. The other day it was my crash. Today Richie had an unfortunate puncture. It is always annoying to lose time that way although, with everything that lies ahead of us, the time lost is very small.”

It was a seemingly straightforward stage that greeted the riders after the first rest day of the 2015 Giro: an almost entirely flat, tailwind-assisted jaunt from Civitanova Marche to Forlì. In pristine weather conditions the riders made their way north west along the Adriatic Coast, inching ever closer to Italy’s mountainous northern reaches where the final week of the race will be contested.

It was no surprise when a group of five riders moved clear of the peloton in the opening kilometres of the race, establishing the day-long breakaway. Oscar Gatto (Androni-Giocattoli), Nicola Boem, Alessandro Malaguti (Nippo-Vini Fantini), Matteo Busato (Southeast) and Alan Marangoni (Cannondale-Garmin) worked well to build an early lead as the peloton kept a close eye on the escapees.

The leaders’ advantage grew to beyond four minutes before the peloton tugged on the leash, reducing the deficit to two minutes. But the pace in the main field soon eased up again, the gap starting to build once more.

It was halfway through the 200km stage that the five leaders enjoyed their greatest advantage of roughly 4:40. By the time they reached the top of the day’s only classified climb roughly 7km later — the fourth category Monte di Bartalo — the lead was 4:05 and on its way down. Malaguti led the breakaway over the top followed by Marangoni and Busato but the result had no impact on the KOM classification.

With 80 decidedly flat kilometres remaining the all-Italian breakaway had 3:45 between it and the peloton and by 75km to go the lead was down to 3:30. With Giant-Alpecin and Trek Factory Racing taking responsibility for the chasing, the peloton seemingly had the five leaders well under control.

The deficit was hovering around the three minute mark with 50km left to race as Lotto Soudal started to contribute to the chase in the peloton. But with only three riders working in the main field — one each from Giant-Alpecin, Trek and Lotto Soudal — compared to five riders working well in the break, the lead didn’t come down as fast as many might have predicted.

At the first intermediate sprint, with a touch over 40km remaining, Gatto led Boem and Busato over the line, the peloton rolling through 2:30 later. Despite a few more riders joining the effort at the front of the peloton, the gap didn’t change over the next 10km. With 30km to go and the gap still at 2:30 it looked as if the well-drilled breakaway had a real chance of victory.

The second and final intermediate sprint with 21km to go was also a non-event, the breakaway riders more concerned about maintaining a smooth paceline than sprinting for points and a small cash prize. A strung-out peloton sped through two minutes later, the gap finally on its way down.

Stefan Kung (BMC) attacked solo from the peloton with roughly 18km to go but his move was short-lived thanks to the impressive tempo being set by Lotto Soudal on the front of the bunch.

With the breakaway starting to look like it was going to survive, Oscar Gatto had a puncture with 13.1km to go — a cruel way to end his chances of a stage victory. He got moving again quickly but was quickly swamped by the peloton.

The four remaining leaders went through the 10km-to-go banner with a lead of 1:30 as Lotto Soudal gave it everything on the front of the peloton to bring the race back together. But with no other teams willing to contribute to the chase, the four leaders powered away to contest the unlikely victory.

With a little over 5km to go, Richie Porte had a mechanical issue in the peloton, and was controversially given a replacement front wheel by Simon Clarke (Orica-GreenEdge). Sky dropped four riders back to help Porte cut his losses and even Michael Matthews (Orica-GreenEdge) appeared to do a turn or two to help his compatriot out, despite being on a different team.

At the head of the race Marangoni was the first to attack from the breakaway, making his move with 1.4km to the line. The chasing trio caught Marangoni just in time to begin the sprint and it was Boem that launched first. The Bardiani-CSF rider opened a small gap on the rest of the quartet, powering away to the biggest victory of his career.

Richie Porte crossed the finish line a further 47 seconds behind the main peloton, pushing him down into fourth overall, 1:09 behind Contador and 1:06 behind Aru.

The Giro d’Italia continues tomorrow with a 153km stage from Forlì to Imola which features three categorised climbs and another six small ascents for the riders to contend with. 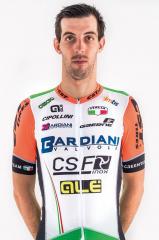