“Today I was part of a great team,” said Tiralongo after the tough 215 kilometre stage from Benevento. “I found the right breakaway. My job was to wait for my team-mates on the final climb, but things didn’t turn out that way.

“It is an unexpected win. The team car told me to go for it, so I rode the final five km at 100%. On the hard final climb, I caught Slagter, then I held on as the finish line approached.”

The 37 year old was 56 seconds ahead of his team leader Fabio Aru, who gained a second over GC rivals Alberto Contador (Tinkoff-Saxo) and Richie Porte (Sky) in their sprint to the line. They finished 10th, 11th and 12th respectively on the stage.

Aru’s time gain inched him closer to Maglia Rosa Contador in the overall standings, but he is three seconds adrift of the pink jersey he craves. Porte remains 22 seconds back, while Mikel Landa is now 46 seconds adrift in fourth place after conceding four seconds to the race leader today.

Contador is still recovering from the partially dislocated shoulder he suffered earlier this week. He said he was satisfied with how things worked out, although he had wanted to conserve more energy.

“I would have preferred to have ridden more conservatively from the final climb to the finish, but Aru asked me to work with him because Urán was behind us and it was important to put time into him,” he said.

“We worked together, even if he sprinted to gain back a second, but I’m very happy with where I am after nine stages. I have the Maglia Rosa, and I have a rest day for my shoulder and legs to recover.”

The riders have a break from racing on Monday but will knuckle down again Tuesday with a 200 kilometre race from Civitanova Marche to Forlì. Contador will hope to return to his previous level as time continues; he knows that Aru, Porte and others will throw everything they have at him as the race continues.

Coming on day before the Giro’s first rest day, it was guaranteed that the riders would go full gas on the road to San Giorgio Del Sannio, knowing that they would be able to recharge their batteries on Monday. The stage was a very lumpy one, with roads that were constantly up and down. The parcours included the second category climbs of Monte Terminio and Passo Serra as well as the first category ascent of Colle Molella.

This group had just under six minutes lead by the top of the Monte Terminio. There Geschke took the top points, while Moinard became race leader on the road.

By the top of the category one Colle Molella, the leader were just over two minutes clear. Geschke was again first to the summit and moved into the lead of the mountains classification.

Slagter picked up the intermediate sprint and continued his solo move, trying to go it alone towards the finish with over 60 kilometres remaining.

Behind, Tiralongo was aggressive and clipped away in a couple of moves. The first, with Herrada, was brought back, and so too a subsequent move with Elissonde.

However he went again on the second category Passo Serra climb and this time got a gap. He had his mind set on trying to get back to Slagter, although he said afterwards that a big motivation was being out front and ready to help Aru if required.

Aru hit the jets on the climb and was joined by team-mate Mikel Landa, as well as Contador and Porte. They had narrowed their gap to less than three minutes on Slagter, but Tiralongo was a bigger threat.

He caught the leader with eight kilometres remaining and stayed with him for three kilometres. Slagter’s legs gave out at that point and he went backwards, losing his chance. Tiralongo continued on to take the win, while Slagter was caught by those chasing behind and would finish seventh.

Further back, Aru and Landa had done much of the riding but Contador finally came through, agreeing to collaborate in order to further distance Rigoberto Uran (Etixx-QuickStep). The latter ended up 28th on the stage, losing one minute 43 seconds to Tiralongo but, more significantly, giving up 47 seconds to Aru and 46 to Contador and Porte.

Contador held the pink jersey but saw Aru nibble one second out of his four second lead. 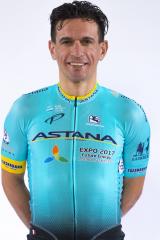