Russian rider Ilnur Zakarin followed up on his win in the Tour de Romandie with another victorious showing on Wednesday’s 11th stage of the Giro d’Italia, soloing to success on the motor racing circuit in Imola.

The Katusha rider was involved in the day’s big break and knuckled down with the other riders to open up what would be a stage-winning advantage.

He then took off inside the final half hour of racing, getting a gap on the penultimate climb and then further extending that on the final lap of the Imola finishing circuit.

“I started the stage in good heart, and the breakaway riders worked well together,” said Zakarin. “I made one attempt to get away, and at the second try, I made it.

“I learned a lesson in the stage that Intxausti won because that day I made the mistake of attacking too early. This time, I waited until the last moment. I still can’t believe that I won the Tour de Romandie, and now I’ve won a stage of the Giro. I have many emotions, and I’m very happy.”

Zakarin, who served a two year ban between 2009 and 2011 due to a positive test for the steroid methandienone, won the Tour de Azerbaidjan last season and then this year took the overall in Romandie.

Race leader Alberto Contador finished in a group one minute and two second back. He animated the finale with an attack on the final climb, but this was contained. While he didn’t get a chance to pad his three second lead over Fabio Aru (Astana), the aggression may be a signal to his rivals that he is recovering from his shoulder injury and will take a more active approach in the days ahead.

“The terrain wasn’t ideal for an attack, but sometimes you just go on instinct,” he said. “It depends on whether you feel good or not. Today was very hard, much harder than yesterday, with 50km less.

“I’m feeling better each day, and the bruising on my legs is getting better. A thousand things can still happen. It may look easy, but there is still a very long way to go.”

Coming one day after Richie Porte’s controversial two minute time penalty for accepting a wheel from Orica GreenEdge rider Simon Clarke, some suggested that the peloton should show solidarity for the Sky rider at the start.

Nothing of any great significance took place and the stage began as planned in Frioli, setting the riders off on a 153 kilometre battle to the motor racing track at Imola.

The parcours was lumpier than the two category three climbs and one fourth category ascent would suggest, and expectations were that a breakaway would stand a good chance.

Trek Factory Racing rider Giacomo Nizzolo took the early intermediate sprint after 7.6 kilometres of racing, then a move of four went clear and sparked off a bigger escape of ten riders.

These opened a gap of just under four minutes, after which Betancur crashed and had to be seen by the race doctor. He was able to return to the front, though, and pressed on with the other riders.

The BMC Racing Team fancied the chances of former world champion Philippe Gilbert and combined with the teams of the overall contenders to drive the chase behind. They hacked the break’s lead to just under a minute with 45 kilometres left, prompting some expectations that the escape move would not make it to the line, and Montaguti, Rutkiewicz and Fernandez all drifted back.

The BMC Racing Team was conscious it was burning a lot of matches and opted to fire Stefan Kung up the road in a bid to bridge. This was unsuccessful and inside the final 22 kilometres, Zakarin seized the chance and rocketed clear on the second-last ascent.

He extended his lead on the rain-soaked downhill and continued to pull clear all the way to the line. Rigoberto Uran was less fortunate in the damp conditions, crashing and ending up on the ground. He was however able to get back to the group and avoided any further time loss. Contador attacked on the final ascent of the climb and got a gap over Aru, Porte and his other GC rivals. While he was hauled back, it was a psychological boost for the rider and showed that he is on his way back after his partially dislocated shoulder.

The race continues Thursday with a 190 kilometre stage from Imola to Vicenza. While it lacks big climbs, the finale is both undulating and tricky, giving further opportunity for gaps. 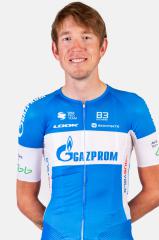