Romain Bardet made up for a disappointing general classification in this year’s Tour de France with a spectacular victory on stage 18 into Saint Jean de Maurienne.

The Ag2r La Mondiale rider, who took sixth overall twelve months ago, was part of a large breakaway group which slipped clear early on. He broke away on the Col du Glandon, the day’s toughest climb, and then thundered downhill to build his lead.

Showing the same descending prowess which yielded him a stage win in the Critérium du Dauphiné, he opened an advantage which he then protected on the stunning Lacets de Montvernier climb. He eventually hit the line 33 seconds ahead of a hard-chasing Pierre Rolland (Europcar), sealing a French one-two.

Fuglsang was hit by a motorbike during the stage but rebounded remarkably well to take that strong finish.

“It is a really special feeling,” said the day’s winner. “There is a lot of trying until this stage and just to arrive to finish it off today brings a lot of emotions. I will just try to appreciate it, although it is already going so fast.

“There is plenty of emotion, I’m very happy to get a stage win in this Tour de France.”

Given his strong overall win last year plus his stage win in the Dauphine, he said he was under a lot of pressure in the race, and particularly so on Wednesday’s stage. It covered the same route as the one he won in the Dauphiné, but it didn’t go well at all and he finished ten minutes back in 36th place..

“It has been hard to deal with the pressure,” he said. “Yesterday I had a very bad stage. People said if you win the stage in the Dauphiné, I am pretty sure that you can win again in the Tour de France. But I didn’t feel good at all.

“Last night I was pretty close to dropping everything, but today I said I have to start again and it worked out.”

Earlier, general classification contender Alberto Contador battled back from a crash on stage 17 to attack on the Glandon. Chris Froome’s Sky team didn’t react, clearly regarding him as no longer a threat overall, but the Spaniard was eventually brought back on the descent.

He rode aggressively on the spaghetti-like switchbacks of the Lacets de Montvernier, as did 2014 Tour winner Vincenzo Nibali (Astana), but Froome’s other rivals were passive and no lasting gaps were opened.

The yellow jersey group came in three minutes and two seconds back, with no major changes in the overall. Froome remains three minutes and ten seconds ahead of Quintana and four minute nine up on Valverde. The only shift in the top ten is Bardet moving up a place and knocking Warren Barguil (Giant-Alpecin) down to 11th. 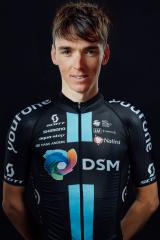