In the first three stages, Lucinda Brand (Rabo Liv) finished second twice, but today Brand climbed on to the top step of the podium in Mantova. The Dutchwoman was quickest from the nine-rider breakaway that formed just after the day’s only categorised climb. Italians Valentina Scandolara (Orica-AIS) and Elena Cecchini (Lotto Soudal Ladies) rounded out the podium.

“I got to ride around in the pink jersey for a day and now also a stage win! My Giro has been made,” an ecstatic Brand commented.

The nine-rider escape group was a mix of overall contenders, domestiques and small-group sprinters. Brand, who wore the maglia rosa on stage two, is expected to support her team’s overall ambitions while Scandolara and Cecchini pack a punch in the sprint and have team approval to chase stage wins. The podium trio was joined up the road by Ella columnist Loren Rowney (Velocio-SRAM), Giro Rosa overall winner (2009) Claudia Lichtenberg (Liv Plantur), Malgorzta Jasinska (Alé Cipollini), Chiara Pierborn (Top Girls Fassa Bortolo), Davia Tuslaite (Inpa Sottoli) and Mayuko Hagiwara (Wiggle Honda). The nine came to the line 1:15 ahead of the peloton.

The heat wave sweeping across Europe has yet to abate, which meant for another steamy start. A technical finish capped off a relative flat stage, which at 135 kilometres, was the longest of the tour.

Despite early attacks, the peloton stayed together during the opening kilometres. Around the 30-kilometres mark, Giro Rosa debutante Lizzie Williams (Orica-AIS) attacked and managed to open up a gap. She quickly extended her advantage out to a minute but the peloton reeled her back in just 500 meters from the top of the only categorised climb.

The peloton split on the short but steep climb with Flavia Oliveira (Alé Cipollini) beating out Carlee Taylor (Lotto Soudal) to the points over the top. But even second on the climb was enough for Taylor to keep the green QOM jersey.

Brand and company broke away from a slightly reduced bunch just beyond the GPM. By the time they hit the bottom of a long descent, they had pocketed four minutes on the peloton. With Megan Guarnier in the maglia rosa, it was time for Boels-Dolmans to spring into action.

“The entire team minus me and Evie [Stevens] put themselves on the front and kept the gap down to keep me in pink,” Guarnier told Ella CyclingTips following the stage. “It was really hot out there and the girls really gave it everything they had, completely sacrificing themselves for our overall ambitions. You look at the results and see my teammates, like Lizzie [Armitstead], have lost time -and that’s for us.”

Velocio-SRAM and Bigla traded turns with Guarnier’s teammates. With 10 kilometres to go, the gap was decreased to two minutes, which was still enough for the break to stay away and for Guarnier to keep the pink jersey.

The peloton took back another 45 seconds before the finish, and Annalisa Cucinotta (Alé Cipollini) led the peloton home just 1:15 after Brand had won the small group sprint for the stage victory. “It was incredible to ride in the maglia rosa today,” said Guarnier. “The team was very excited, and I was very proud to pull on that jersey this morning. It was a very long day in the saddle. The team rode to a really high level today. I’m very happy that, at the end of the day, all their hard work paid off.”

Guarnier heads into stage four with a two second advantage over Anna van der Breggen (Rabo Liv). The fifth day of racing marks the mid-point of the race and the likely last chance for the sprinters to strut their stuff.

“Tomorrow looks to be another sprint day – but you never know how the race is going to play out in the Giro,” said Guarnier. 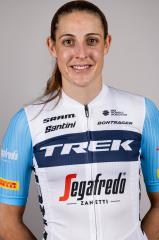 Four Giro Rosa stages done and dusted, which means we have four days worth of Giro Rosa content for you to check out.