The Briton dropped all of his rivals and finished 59 seconds ahead of his Sky team-mate Richie Porte, who put in a late burst to catch Froome’s chaser Nairo Quintana (Movistar) and then accelerated clear with 250 metres to go.

The 2013 Tour runner-up Quintana came in five seconds behind Porte, with Robert Gesink (LottoNL-Jumbo) putting in a fine performance after leading solo earlier on the climb.

He left the riders he was with to net fourth, one minute 33 seconds back, while Alejandro Valverde (Movistar) and Geraint Thomas (Sky) completed the top six, two minutes and one second off the stage win.

Defending Tour champion Vincenzo Nibali (Astana) lost even more time, getting into trouble early on during the climb and ultimately trailing in 21st, almost four and a half minutes behind. His yellow jersey hopes are in tatters this evening.

As expected, Froome was deeply satisfied by the day’s result. “It was a dream day for us. Hopefully now we can settle into defensive riding to keep the jersey.”

However he dismissed suggestions that the final result is a foregone conclusion.

“It is certainly not over. We have a long way to go until Paris. You can see things change in a matter of minute, so let’s see what happens now.”

He ends the day two minutes 52 seconds up on van Garderen, who conserved his second place but who is slipping further away from the top step of the podium. Quintana improved from ninth to third and will hope to continue his progression, knowing that van Garderen is now just 17 seconds ahead.

Valverde, Thomas and Contador are next in line, clustered closely together in terms of their deficit. They are four minutes one second, four minutes three seconds and four minutes four seconds off Froome.

After the rest day in Pau, the Tour de France recommenced with first mountain stage of the race, a 167 kilometre trek from Tarbes to La Pierre – Saint Martin. It was largely flat with three category four climbs before the Hors Category ascent up to the finish.

A total of 183 riders began the stage, with two others not continuing. These were Ivan Basso (Tinkoff-Saxo), diagnosed with testicular cancer on Monday, and an ill Lars Boom (Astana). The jersey wearers were Sky’s Chris Froome (yellow), Basso’s team-mate Peter Sagan (green), Daniel Teklehaimanot of MTN-Qhubeka (polka dot) and Nairo Quintana (Movistar, white).

Pierrick Fédrigo (Bretagne-Séché) attacked after seven kilometres of racing and got a gap. Others tried to get across but were unable to do so, leaving the past stage winner out front alone. He built a lead of 15 seconds by kilometre 12. Four kilometres later, he was a full one minute 40 seconds ahead of the peloton, with Cofidis rider Kenny van Bilsen at 30 seconds.

The latter chased hard but was unable to make any inroads. He was one minute ten seconds back at kilometre 25.5, while the bunch was six minutes 45 down.

Fedrigo was motivated by the thoughts that it was the French national holiday of Bastille Day. He had clocked up four stages in the past but never on July 14; indeed the last Frenchman to do so was David Moncoutié.

Van Bilsen kept chasing and finally got across, making the junction at kilometre 45. The peloton was a full 11 minutes 20 seconds behind then and this grew to 14 minutes 40 seconds with 91 kilometres to go.

Van Bilsen had taken the KOM sprint at the first climb, the Cote de Bougarber (km 66) and did so again at the Côte de Vieilleségure (km 90).

The FDJ team decided to take up the chase and whittled the lead back to nine and a half minutes with 45 kilometres left. Soon afterwards Fedrigo took the intermediate sprint ahead of van Bilsen; the bunch reached that point seven minutes 20 seconds later, where Andre Greipel (Lotto-Soudal) took the points for third ahead of Mark Cavendish (Etixx – Quick-Step) and John Degenkolb (Giant-Alpecin).

Peter Sagan was only seventh and this was enough to see the green jersey move back onto the shoulders of Greipel.

Van Bilsen picked up the category four prime at the Cote de Montory (km 134), but the chances of him staying clear to the top of the final climb were looking bleak as the gap was down to two and a half minutes at the base of that ascent.

Wilco Kelderman (LottoNL – Jumbo) was another in trouble, as were the Cannondale-Garmin trio of Andrew Talansky, Dan Martin and Ryder Hesjedal.

With twelve kilometres to go Fedrigo was 25 seconds ahead. Last year’s third-place finisher Thibaut Pinot (FDJ) got into trouble and went off the back of the chasing group. Romain Bardet (Ag2r La Mondiale) was also in difficulties.

Kelderman’s team-mate Robert Gesink attacked with 11.5 kilometres to go, catching and passing Fedrigo and beginning a solo push to the line.

Lampre-Merida’s Rafael Valls bridged across to Gesink to make it two leaders. At the same time Katusha’s leader Joaquim Rodriguez was shelled.

Valls’ time at the front was limited as Gesink dug in again and pushed ahead.

Movistar had been leading but Sky pushed to the front with 8.5 kilometres left, Geraint Thomas leading for team captain Chris Froome. This prompted Alejandro Valverde (Movistar) to attack, with the Spaniard getting a slight lead. Sky got him back with 7.7 kilometres left, leading to a temporary lull in hostilities.

With 6.8 kilometres left Giro d’Italia winner Alberto Contador (Tinkoff Saxo) was dropped. Meanwhile Gesink was caught and Sky’s Richie Porte ramped up the pace for Froome, who was being tracked by Quintana. The other riders had been distanced, including the competitor in second overall, Tejay van Garderen (BMC Racing Team).

Encouraged by his rivals’ difficulties, Froome hit the jets with 6.4 kilometres to go, distancing Quintana. The Colombian continued to chase, while behind van Garderen was with Gesink and hoping to limit his losses.

With 5.3 kilometres left Quintana was 19 seconds back, while van Garderen, Valverde, Thomas and Pierre Rolland (Europcar) were at 46 and Contador at 1 minute 17. Nibali was a full two minutes 46 in arrears, his Tour dreams surely over.

Froome hit two and a half kilometres to go and held a 50 seconds lead on Quintana. The van Garderen group was at one minute 45, with the American doing most of the chasing.

Porte was feeling good and bided his time before jumping hard and getting across to Quintana. He then kicked again with 250 metres to go and opened a gap, netting second on the stage.

The Colombian rider came in one minute and four seconds behind Froome for third, while the other general classification contenders were scattered behind and under big pressure.

They will hope to make some sort of a fight back on Wednesday’s eleventh stage, the second Pyrenean leg. It crosses six categorised climbs including the first category Col d’Aspin and the Hors Categorie Tourmalet before the third category climb to the finish line at Cauterets. 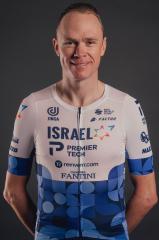