Geschke wins stage 17 of the Tour with long solo escape, GC top-10 gets a shake-up

PRA LOUP, France (CT) – Simon Geschke (Giant-Alpecin) has held off a late charge from Andrew Talansky (Cannondale-Garmin) to win stage 17 of the Tour de France with a long-range solo attack.

Geschke attacked from a 28-rider breakaway with just under 50km remaining and was able to build and maintain a lead over two second-category climbs to take victory at Pra Loup.

Talansky had been in the same 28-rider group and used the Col d’Allos climb and descent and the 6.2km stage-ending climb to catch and drop the remainder of the breakaway riders and erode Geschke’s advantage.

But the American would run out of tarmac with Geschke holding on to win the stage by 32 seconds. Rigoberto Uran (Etixx-Quick-Step) was third, another 29 seconds behind, having also been part of the day’s major breakaway.

“This morning I didn’t feel too good in the beginning of the stage,” Geschke said. “I had a bit of heavy legs after the rest day so I was just trying to go with some attacks and I found myself in a big breakaway.”

Geschke made his move with two challenging climbs still ahead of him, determined to at least have a chance at victory.

“I didn’t want to wait again to get dropped and be like 10th place again,” Geschke said. “I looked around in the breakaway and saw really good climbers — Thibaut Pinot and Richie Porte — and I knew if I stayed with them they’d probably just drop me on the long climb.

“I just took the only chance I had and I went after the intermediate sprint and just tried it. I thought ‘if it doesn’t work out, it doesn’t work out and I’ll just let myself drop back to the group of Warren Barguil and try to support him’.

“It was just an all-in tactic. It’s incredible that it worked out — I still can’t believe it actually.”

Overall leader Chris Froome (Sky) again defended his lead in the overall classification, following attacks from his major rivals throughout the day to finish with the same time as Nairo Quintana (Movistar).

“[It was] a tough day out there,” Froome said post-stage. “When you see some of the GC contenders attacking 50-60km into the race you know it’s going to be tough.”

Quintana’s teammate Alejandro Valverde lost seven seconds on Froome and Quintana but moves into third overall with the withdrawal of Tejay van Garderen (BMC). The American had been suffering with illness throughout the day and withdrew from the race with 70km to go in the stage.

Alberto Contador (Tinkoff-Saxo) remains in fifth but lost 2:10 on his GC rivals after crashing on the technical Col d’Allos descent. Geraint Thomas (Sky) now moves into fourth overall after finishing more than a minute ahead of Contador.

Another stage of the 2015 Tour de France, another day of high temperatures for the riders to contend with. The bunch rolled out of Digne-Les-Baines with five categorised climbs and the first of three summit finishes in the Alps ahead of them.

The first 60km of the stage featured a multitude of attacks as many riders tried to get clear and form the day’s main breakaway. There was even an attack from Nairo Quintana (Movistar) which prompted a reaction from Sky and spelled the end for an attempted breakaway group that was trying to get up the road.

At the top of the day’s first climb, the third-category Col des Lèques after 40km, Rafal Majka (Tinkoff-Saxo) took two KOM points while Kristjian Durasek (Lampre-Merida) claimed one. At the other end of the race, third-placed Tejay van Garderen (BMC) was getting dropped from the main field having come out of the second rest day with an illness.

With 57km of the stage’s 161km completed, 24 riders were out front, leading a Sky-controlled peloton by 40 seconds. By the 64km mark the lead group had grown to 28 and the day’s main breakaway had finally been established.

Among the lead group was Peter Sagan (Tinkoff-Saxo) who had made the break for the fourth straight day of racing and had been in no fewer than four unsuccessful moves earlier in the stage before following the right move. Other notable riders in the lead included Thibaut Pinot (FDJ), Richie Porte and Nicolas Roche (Sky), John Degenkolb and Simon Geschke (Giant-Alpecin), Andrew Talansky and Ryder Hesjedal (Canondale-Garmin) and Rigoberto Uran (Etixx-Quick-Step).

The third-category Col de Toutes Aures climb peaked after 67km and it was Serge Pauwels (MTN-Qhubeka) that took the two KOM points ahead of teammate Daniel Teklehaimanot. By the time the peloton reached the summit they were 2:20 behind the leaders while a group containing Tejay van Garderen was another 2:15 back.

With 82km completed and 79km to go, the Van Garderen group bridged to the yellow jersey group. But the good news would be short-lived for the American.

When the peloton began the second-category Col de la Colle Saint-Michel climb with 74km to race, Michael Rogers attacked with his Tinkoff-Saxo leader Alberto Contador in tow, the latter attempting a long-range attack in order to improve on his fifth on GC.

Contador was left on his own a kilometre later and a few minutes later fellow Spaniard Alejandro Valverde (Movistar) bridged across, dragging a thinned-down yellow-jersey group across. The acceleration put Van Garderen in trouble once more and with 70km to go, the BMC leader pulled over to the side of the road and climbed into his team car, his Tour de France over.

At the top of the Col de la Colle Saint-Michel Serge Pauwels took maximum KOM points from a small group off the front of the breakaway, but the large lead group was all back together on the descent.

Simon Geschke attacked from the break shortly after the intermediate sprint as the group he’d been in began to splinter. Daniel Teklehaimanot set off in pursuit on his own while several smaller groups formed behind him. Richie Porte would sit up a short time later, making his way back to the peloton to help Chris Froome, foregoing his own chances of a stage victory.

With 40km to go and the day’s longest climb approaching, Geschke had a lead of more than a minute on the Peter Sagan group and more than seven minutes on a peloton that was biding its time before the two remaining climbs.

The start of the Col d’Allos climb (with 36km to go) signalled the start of fireworks within the remnants of the lead group. Throughout the 11km ascent, attacks came from Rafael Valls (Lampre-Merida), Teklehaimanot (after being reeled in from his initial attack), Steven Kruijswijk (LottoNL-Jumbo), Matthias Frank (IAM), Nicolas Roche (Sky) and Thibaut Pinot (FDJ).

Four kilometres from the summit a group of five chasers had come together: Pinot, Talansky, Frank, Kruijswijk and Adam Yates (Orica-GreenEdge). Yates and Kruijswijk would soon be dropped and Pinot would attack again, heading towards the summit alone. A couple of minutes ahead of him Simon Geschke was plugging away, about to begin the twisting descent to the base of the last climb.

Pinot was roughly a minute behind Geschke at the top of the climb with a chase group of Rigoberto Uran, Talansky, Yates, and Frank not far behind. The yellow jersey group, meanwhile, had been as much as 11:30 behind Geschke but on the climb that advantage started coming down quickly. Trek lifted the pace for Bauke Mollema then Astana came to the fore as the peloton thinned to less than 10 riders.

About 1.5km from the summit of the Col d’Allos Vincenzo Nibali (Astana) attacked and only Froome, Quintana, Valverde and Contador were able to follow. An attack from Quintana just before the summit was reeled in by Froome just as the group of leaders caught Richie Porte. Porte went straight to the front to set a tempo for Froome briefly before dropping from the group.

On the infamous Col d’Allos descent, Thibaut Pinot crashed on a sharp left-hander before getting straight but up and continued. But the Frenchman appeared to have lost his confidence and was soon caught then passed by Talansky, Uran, Yates, Kruijswijk and Frank.

In the GC-leaders’ group Contador also crashed and was quickly attended to by teammates Peter Sagan (who reportedly gave Contador his bike) and Rafal Majka. Contador would spend the remainder of the stage trying to catch up but would ultimately lose more than two minutes on the group he’d been in.

When Simon Geschke reached the bottom of the final climb to Pra Loup, with 6.2km to go, he had 1:15 over Talansky and 1:25 over Uran. Both riders would eat into the German’s advantage on the climb to the finish, with Talansky just 300 metres behind when Geschke had 4km to go. But Geschke had done enough, riding away to win the stage by 32 seconds ahead of Talansky and 1:01 ahead of Uran. Pinot would finish fourth with Frank fifth.

When the group of GC leaders began the final climb it was just Valverde, Froome, Nibali and Quintana together. With the remnants of the 28-rider breakaway being swept up, Quintana and Valverde and Nibali soon benefited from having some teammates to pace them on the final climb.

Quintana attacked three times on the final climb. The first was covered by Froome and several others, the second distanced all but Froome, and the final move saw Quintana finish the stage just ahead of Froome, albeit with the same time (7:16 behind Geschke). Alejandro Valverde and Vincenzo Nibali both lost small amounts of time while Alberto Contador would slog his way to the finish more than two minutes down on Froome and Quintana.

The 2015 Tour de France continues tomorrow with the second of four days in the Alps. The 186.5km stage from Gap to Saint-Jean-de-Maurienne features seven categorised climbs — including the hors categorie Col du Glandon — but ends with a flat finish.

Chris Froome will again wear the yellow leader’s jersey — his 12th day in this year’s race — Peter Sagan remains in the green jersey of points classification leader and Joaquim Rodriguez (Katusha) will be in polka-dots once more, in lieu of KOM leader Chris Froome. Nairo Quintana continues to lead the best young rider classification and Movistar will once again be in the yellow helmets of the best placed team. 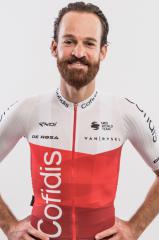