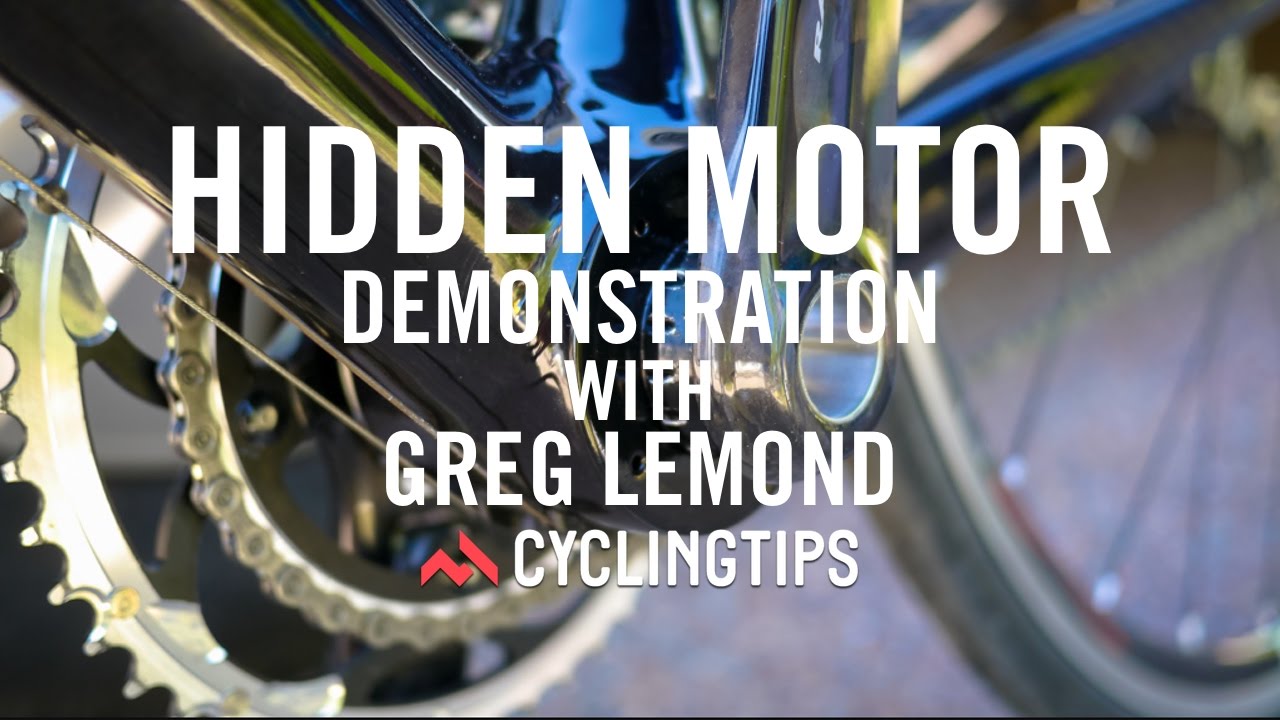 The full production build weighs roughly 8.5kg but LeMond believes it could easily be built to the UCI's minimum weight of 6.8kg.

The full production build weighs roughly 8.5kg but LeMond believes it could easily be built to the UCI's minimum weight of 6.8kg.

ALPE D’HUEZ, France (CT) – There has been plenty of talk of hidden motors at this year’s Tour de France, yet some people remain sceptical about the technology and the threat of its use.

In order to address this, triple Tour winner Greg LeMond took delivery of a bike with a motor late on Friday and showed it to CyclingTips at Saturday’s stage finish in Alpe d’Huez.

He had the machine made to illustrate his concerns about the availability and potential of the technology. In the attached video and audio, LeMond demonstrates how the bike’s hidden motor works.

“This is the production model but higher cost versions are available. The very expensive ones have ceramic gears and are silent. I rode one before and it was very quiet.”

The version LeMond showed CyclingTips used a battery-containing bottle in the seatpost cage. That is the only giveaway, other than two very small buttons on the inside of the handlebars near the brake hoods. These could easily be mistaken for satellite shifters used with electronic gears.

LeMond said that the technology is also available to conceal batteries within the frame of the bike and that tiny switches can be concealed under the handlebar tape.

The pin which holds the motor in place in other models is also absent, making the motor even harder to detect.

LeMond has long been vocal about anti-doping and was outspoken about Lance Armstrong long before the Texan was exposed and given a lifetime ban. He said that unless the UCI is serious about tackling this new threat, the sport could face a very dangerous future.

“I believe it has been used in top level races,” he said. “I haven’t seen anything unusual in this year’s Tour, but it is something that I have tried to talk to the UCI about for them to take it seriously. I think they should, but they are not.

“At least from what I heard, there are very few tests on the bike. If I was the UCI, I would be all over this mandatory sequestering of bikes, mandatory checks and no changes of bikes in the race.”

As reported by CyclingTips this week, just 25 bike checks were carried out between the start of the Tour and the end of stage 18. A further five bikes were examined Saturday, namely those of stage winner Thibaut Pinot (FDJ), race leader Chris Froome (Sky), the other riders in the podium positions, namely Nairo Quintana and Alejandro Valverde (both Movistar), plus Alberto Contador (Tinkoff-Saxo).

Considering the total number of ‘bike days’ in the race, testing 30 bikes over the course of 20 days represents less than 1% of bikes that could have been tested.

Listen to the audio track above for full details about the bike. In it LeMond speaks about the extent of the boost available to anyone racing assisted, the lack of a real weight penalty and discusses a new form of mechanical doping that he believes is even harder to detect. The battery for the motor is stored in this bidon. LeMond told CyclingTips it’s possible to hide batteries in bike frames as well. The motor is activated by connecting a small attachment to the ‘nozzle’ of the bidon. It can’t be activated without the attachment. Some wiring is a visible on close inspection but could easily be hidden. Buttons on the inside of the handlebars cycle between various power levels. These could easily be mistaken for satellite shifters often used with electronic gears. The motor is hidden inside the seattube and bottom bracket. The full production build weighs roughly 8.5kg but LeMond believes it could easily be built to the UCI’s minimum weight of 6.8kg.