It’s been an exercise in persistence and determination. Tony Martin has been sitting second overall in the Tour de France since taking the runner-up slot in Saturday’s time trial, hovering just off the lead as first Rohan Dennis, then Fabian Cancellara, and then Chris Froome took over the yellow jersey.

However, after starting stage four just one second behind Froome, he took the Maillot Jaune with bucketloads of panache, returning from a puncture, attacking the lead group with 3.2 kilometres to go and then soloing to a superb victory.

Together with the bonus seconds for the win, he ended the stage twelve seconds clear of Froome and 25 up on Tejay van Garderen (BMC Racing Team).

“I am feeling pure happiness,” he said. “All the pressure, all the sadness from the last days come off now. It is a really emotional stage, a day for me and I am super thankful that everything went well. I am very thankful also to this team. They support me so much.”

The 223.5 kilometre stage from Seraing in Belgium to Cambrai in France included seven cobblestone sectors and was expected by some to blow the race apart. However, unlike the equivalent stage last year, it proved far less decisive. The milder weather conditions and largely dry roads were much safer and while some gaps opened up on the pavé, these were closed down soon afterwards and nothing stuck.

Martin was hoping to gain time over Froome but the Briton was riding strongly, staying close to the front and even attacking with team-mate Geraint Thomas with ten kilometres to go.

This and subsequent moves were hauled back and while Martin was fatigued after a puncture and on a team-mate’s bike, he seized his chance close to the end and managed to grab the win.

“Nobody was willing to chase in the front so I just gave it a try,” he said. “I didn’t believe in [the chances of] this victory but somehow it happened.”

Froome slipped back to second place but was happy with the result. He and his team don’t have the pressure of defending yellow in the days ahead. More importantly, he showed himself and others that he was not only competent on the cobbles, but that he was in control.

Together with his team, he covered dangerous moves by Nibali and others and then gave it a go himself with ten kilometres to go.

“It wasn’t really about showing I was strong on the cobbles, it was about just staying out of trouble,” he said.

“I was with Geraint Thomas at the front and we just thought we’d try something. We gave it a go but Tinkoff-Saxo pulled it back behind us.

“The legs feel good. Congratulations to Tony – he has been very close to the yellow jersey for a few days now and he definitely deserves it after all the hard work he has done.”

Two fallers from Monday’s third stage were non-starters on day four of the Tour de France, with deposed race leader Fabian Cancellara (Trek) and Daryl Impey (Orica-GreenEdge) making the decision to leave the race. They were joined by an ill Andreas Schillinger (Bora-Argon 18), leaving 191 competitors to roll out of Seraing.

The 223.5 kilometre leg to Cambrai was the longest of the race and was flagged off by Philippe, King of the Belgians.

De Gendt took top points on the day’s sole categorized climb, that of the Côte de la Citadelle de Namur. The break continued to work together but the bunch was riding fast towards the first of seven cobblestone sectors and brought the gap down.

However after this first pavé sector team leaders Alberto Contador (Tinkoff-Saxo), Nairo Quintana (Movistar) and Rigoberto Uran (Etixx – Quick-Step) stopped to change their bikes to more specific machines for the cobbles and the pace dropped for a while.

This enabled the break to increase its advantage to just under four minutes by the feed zone in Binche. The peloton accelerated, though, and the lead started to fall again.

De Gendt beat Brun for the top points at the intermediate sprint. Behind, Mark Cavendish (Etixx – Quick-Step) won the gallop for fifth.

With approximately 50 kilometres to go a number of riders came down on a slippery right hand bend, including Dan Martin plus a couple of his Cannondale-Garmin team-mates. Former hour record holder Alex Dowsett (Movistar) fell a few kilometres later but was also able to get moving again.

The break raced into sector six, with the bunch hitting the same stretch of cobbles 48 seconds later. The hammer went down in the bunch and this caused things to break right up. The increase in pace saw things come back together with 40 kilometres to go.

The action heats up

Stybar put the hammer down with 39 kilometres to go but was unable to get a gap over the front group, which contained approximately 50 riders. However the peloton was blown apart into several different groups by this point, leaving chaos behind.

Etixx – Quick-Step had started the day with Tony Martin just one second behind Froome in the general classification and the team kept the pressure on, hoping to help its rider get the time he needed.

Daniel Oss (BMC Racing Team) led the group onto sector four of pavé, working for his leader Tejay van Garderen. Tour of Flanders winner Alexander Kristoff (Katusha) suffered a puncture, with this issue forcing him to chase hard to try to get back.

With approximately 27 kilometres to go Froome almost went down, rubbing shoulders with two riders but managing to stay upright. Last year’s winner Nibali was in a similar situation soon afterwards, with Lotto Soudal leader Tony Gallopin moving across his wheel. However the Italian reached forward and tapped him to let him know he was there, and the crisis was averted.

Nibali went to the front and turned the screw, putting Froome and others under pressure. However the elastic didn’t snap and the group remained together heading into the final 25 kilometres.

Alberto Contador’s Tinkoff-Saxo team then came to the front, working to keep him out of trouble. They positioned him well heading into the penultimate sector, the longest at 3700 metres. LottoNL-Jumbo immediately hit the front and ramped up the pace.

Last year’s third-placed rider Thibaut Pinot (FDJ) had been sitting right at the back of the group, his position giving him little leeway if anything went wrong. With 21 kilometres to go he ran into trouble with his electronic gearing, and was forced to stop to get assistance.

He had a slow wheel change but rather than knuckling down to the task at hand, he wasted time remonstrating with the mechanic.

Yellow jersey contender Martin had a puncture and was delayed, but was given Matteo Trentin’s bike and had a team-mate help him get back up.

On the final cobblestone sector, Nibali ramped up the speed yet again. He got a very slight gap with just under 12 kilometres to go but this was covered. Stybar then surged, drawing clear and being joined by Nibali and several others, then Froome got across.

Geraint Thomas hit the jets with ten kilometres to go and got a small gap with Froome. A small number of others also pushed forward with them, including van Garderen, Nibali, Paris-Roubaix winner John Degenkolb (Giant-Alpecin), while Alberto Contador (Tinkoff-Saxo) was slightly behind but got back up with the assistance of his team.

A large number of others also rejoined, making it a front group of approximately 40 riders with seven kilometres remaining.

Tony Martin saw a chance and attacked with 3.2 kilometre to go, seeking the yellow jersey. Behind, the sprinters teams stalled and while they then chased hard to try to get him back, there was no catching the multiple world time trial champion.

He thundered home well clear and celebrated the stage win plus race leadership, finally getting the yellow jersey after four days of trying. 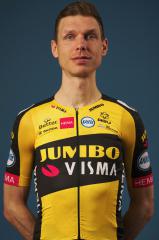