UTRECHT, The Netherlands (CT) – Australia’s Rohan Dennis (BMC) has won the stage 1 individual time trial at the 2015 Tour de France, propelling himself into the first yellow jersey of the race.

Dennis powered through a flat, fast and flowing 13.8km in the Dutch city of Utrecht, stopping the clock with a time of 14 minutes and 56 seconds. His average speed of 55.4km/h was an all-time record in an individual time trial at the Tour de France.

Dennis’ victory comes after no fewer than seven second-place finishes in international ITTs over the past 18 months, in addition to another runner-up result in the Australian time trial championship earlier this year.

“It’s a huge honour,” Dennis said of winning the stage and taking the maillot jaune. “It’s been a long road of second places and to finally knock that on the head and win a time trial and at the Tour de France is really special.”

Dennis was the 38th of 198 riders to take to the start ramp and spent nearly three hours in the ‘hot seat’, waiting to see how his rivals would fare. In the end he was the only rider to complete the course inside 15 minutes, enough to take his first professional victory in Europe.

With The Netherlands in the midst of a heatwave, riders took to the start ramp in Utrecht with temperatures nudging 35 degrees. Most had been wearing ice vests as they warmed up ahead of the stage in an attempt to beat the heat.

The lead changed several times as the first riders started completing the course with Dutch rider Jos Van Emden (LottoNL-Jumbo) the first to set a best time of some longevity: 15:11.

It would take until Rohan Dennis set off half an hour after Van Emden for the Dutchman’s time to be toppled. Dennis was one second slower than Van Emden when he reached the stage’s only intermediate time check, after 7.1km. But by the end of the 13.8km the South Australian had put himself 15 seconds clear at the top of the leaderboard.

It was nearly two hours until a rider looked like beating Dennis. Tom Dumoulin (Giant-Alpecin), one of the pre-stage favourites, enjoyed great support from fans lined five-deep around the course, his home crowd cheering him on as he powered his way through the city.

He was one second down on Dennis as he passed the intermediate check and while it was looking as if he might go close, the Dutchman eventually finished eight seconds down. He would eventually finish fourth on the stage.

Another of the pre-stage favourites, British TT champion Alex Dowsett (Movistar), was off the pace and finished 36 sounds down as all eyes turned to three-time world ITT champion Tony Martin.

At the halfway mark Martin was four seconds behind Rohan Dennis, and by the time he crossed the finish line he had slipped to nearly six seconds behind the 25-year-old Australian. In the hot seat, Dennis breathed a sigh of relief, his biggest challenger accounted for.

While Fabian Cancellara (Trek) hasn’t been at his dominant best in the past 12 months, his five Tour de France prologue victories, all on foreign soul, ensured he commanded significant respect from his rivals and fans alike. The Swiss powerhouse would eventually cross the line in third place, six seconds behind Dennis and just outside the time of Tony Martin.

None of the 14 riders that followed Martin over the finish line would challenge for the podium. Among them were most of the pre-race favourites for the general classification.

Of the so-called “Big Four”, Vincenzo Nibali (Astana) posted the best time, 43 seconds behind Dennis. The defending champion now sits seven seconds ahead of Chris Froome (Sky), 15 seconds ahead of Alberto Contador (Tinkoff-Saxo) and 18 seconds ahead of Nairo Quintana (Movistar).

Rohan Dennis will wear the yellow jersey on tomorrow’s second stage of the 2015 Tour de France, a pan-flat 166km ride from Utrecht to Zeeland that ends with roughly 40km along the Dutch coastline. While the profile suggests a stage that will end in a regulation bunch sprint, strong winds in the closing stages could make for an interesting finale.

Dennis is hopeful of defending his yellow jersey on the stage and earning the right to wear the maillot jaune for a second day … at an absolute minimum.

“The longer the better so Tejay can just go about his thing and we’ll work towards that second and third week with him.” 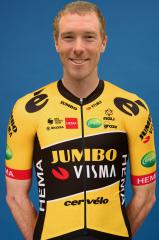