LE HAVRE, France (CT) – On a day of contrasting fortunes for the Etixx-QuickStep team, Zdenek Stybar jumped away inside the final two kilometres to win the stage while race leader Tony Martin crashed in the finale.

Martin badly injured his shoulder and was pushed across the line by three team-mates, nursing his left arm. The sight raised the possibility that he had broken his collarbone and would therefore be unable to continue in the race.

The nature of the injury was later confirmed as that and it looks extremely likely that he will not take the start on Thursday.

Stybar made his move after the confusion caused by the crash. The other sprinters’ teams stalled, looking at each other, and this gave him enough of a buffer to hold on until the line.

As the crash happened inside the final three kilometres Martin was given the same time as the peloton. He remains in yellow as a result but there is real doubt about his chances of continuing in the race.

If so, that will mean that former leader and 2013 race winner Chris Froome (Sky) will take over at the top once again.

Stybar’s success continues the strong Tour of the Etixx – QuickStep team showing. It won stage four when Martin broke clear with just over three kilometres to go, netting victory plus the yellow jersey.

While he is almost certain to leave the race, today’s result shows that others on the squad can also step up when required.

“It was completely crazy,” said Stybar, talking about the run in towards the line. “We knew there was downhill. We lost a lot of positions in the corners, but on the climb I managed to get to the front. I saw that Cavendish was a little bit in difficulties. I saw Tony [Martin] was there okay so I decided to try.

“I went for it and when I saw I had a little gap, when nobody moved directly, I thought ‘okay, maybe I can make it.’”

Make it he did and, as a result, the team has something to celebrate on what is otherwise a frustrating day for it.

The sixth stage of the Tour de France continued the westward direction of the race, tracking the coastline for much of the 191.5 kilometre route from Abbeville to Le Havre. It travelled mostly through Normandy and a sidewind was expected.

A total of 188 riders lined out with Orica GreenEdge’s Michael Albasini the only non-starter. He had been nursing crash injuries this week and the damage became too much.

Luis Angel Maté (Cofidis) was the first attacker, going from the gun but being reeled in just over three kilometres later.

After five kilometres of racing the day’s break was able to get clear. Perrig Quémeneur (Europcar) kicked things off and was then joined by Kenneth Van Bilsen (Cofidis) and Daniel Teklehaimanot (MTN-Qhubeka). They quickly opened a gap of over a minute and had four minutes 15 seconds by kilometre ten.

Teklehaimanot had been best placed at the start of the day but his deficit of 26 minutes 54 seconds meant that he was of no danger to the yellow jersey of Tony Martin. The break was given leeway and built a lead of twelve and a half minutes by kilometre 28.

Andre Greipel’s Lotto-Soudal team was working to try to set the German up for his third stage win and started riding tempo. This reduced the break’s advantage to under twelve minutes and then down to seven minutes 15 seconds by kilometre 54.

The break raced onwards to the Côte de Dieppe, where Teklehaimanot won the sprint to the top and took the sole available point in the King of the Mountains competition.

He had won that competition outright in the Critérium du Dauphiné and was determined to get similar good publicity for the team in the bigger ASO event.

Approximately ten minutes later he repeated the feat on the day’s second category four climb, the Côte de Pourville-sur-Mer. This raised his total to two points, level with Mur de Huy winner Joaquim Rodriguez (Katusha). However the latter remained in the lead as he was first to the top of that category three climb, considered more important than the category four climbs on stage six.

Back in the bunch, Alejandro Valverde (Movistar) was riding along with torn shorts. He had slipped when he stopped to take a nature break but was not injured.

The break continued onwards and had a five minute gap with 83 kilometres left. This dropped to three minutes 50 seconds after Sky and Tinkoff-Saxo started chasing and slid further to one minute 40 seconds with 49 kilometres remaining.

Soon afterwards Quémeneur took the intermediate sprint at Saint Leonard. Van Bilsen and Teklehaimanot were second and third while back in the bunch, Degenkolb won the gallop for fourth place. The gap at this point with down to 50 seconds and the proximity of bunch to break enticed Thomas Voeckler (Europcar) to have a go.

He chased hard but was unable to make any impression. He sat up and waited for the bunch, which itself had taken the foot off the gas and allowed the break to pull clear again and pad the advantage to two minutes 15 seconds.

Teklehaimanot was determined to end the day in the polka dot jersey and made sure of that when he won the sprint at the top of the Côte du Tilleul. The bunch realised it was time to reel the move in and cut the gap to one minute ten seconds with 26 kilometres to go.

This continued to fall and with the gap at 35 seconds with 12.5 kilometres left, Kenny van Bilsen attacked alone.

As a result he was 25 seconds clear with ten kilometres left while the other two riders were caught. He held on until the three kilometre to go banner but the chasing of teams like Etixx – QuickStep saw him caught with three kilometres remaining.

Giant Alpecin moved to the front for John Degenkolb and drove the peloton towards the start of the uphill stretch before the line. Etixx-QuickStep took over again with race leader Tony Martin sitting second wheel; the Cofidis team then pushed ahead, only to miss out when the sprinters’ teams pushed forward again.

Martin was trying to stay out of trouble but clipped Coquard’s wheel and ended up on the deck. Other riders also fell, but the race leader was the most badly hurt. He suffered a severe shoulder injury and as a result of the fractured collarbone he sustained, was forced to pull out from the Tour.

It was a huge blow to him and his team, but Stybar’s success helped to soften things somewhat.

“For me it is a very important win,” he said. “When I changed from cyclo-cross to road, I had some very difficult times. I was working really hard to make that change and I made some nice results. Strade Bianche, winning the Eneco GC. Also last I had a lot of bad luck, the two crashes with one on Eneco and anther in cyclo-cross. 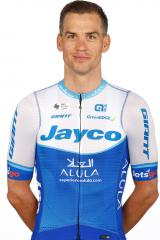