Bouncing back after a disappointing performance thus far in the high mountains, Joaquim Rodriguez landed victory for Katusha on stage twelve of the Tour de France.

The Catalan rider was part of the day’s big break and then made his move on the final climb of Plateau de Beille, attacking Jakob Fuglsang (Astana) and Romain Bardet (Ag2r La Mondiale) and bridging across to the lone leader Michal Kwiatkowski (Etixx – Quick-Step).

“After the first two Pyrenean stages, my morale was pretty low. The only way to make it today was to break away,” he said, explaining his motivation. “I always said I was coming to the Tour for GC but since I’m out of contention, I focus on stage wins. I’ve had a hungerflat at La Pierre-Saint-Martin. It hit me badly. I was strengthless. Yesterday, I crashed in the neutral zone and my hip was hurting.

“I like this climb to Plateau de Beille. I live about fifty kilometres away. I’ve come here a thousand times and I’ve dreamt of winning here a thousand times. Today I’ve seen many acquaintances on the road side, people who came here to cheer on me. I wouldn’t say the last kilometers were easy but I managed to savour my victory. Everyone wanted to win here and it was even harder due to the weather conditions.”

As for the general classification riders, repeated attacks by contenders such as Nairo Quintana and Alejandro Valverde (Movistar) plus forays by Alberto Contador (Astana) and Vincenzo Nibali (Astana) were unable to open any lasting gaps over Chris Froome, who was aided by his Sky team-mates Richie Porte and Geraint Thomas.

Froome looked less strong than he had been two days earlier, but contained his rivals. Valverde grabbed one second with a strong sprint to the line, crossing the finish six minutes 46 behind Rodriguez.

Froome, Quintana, Thibaut Pinot (FDJ), Tejay van Garderen (BMC Racing Team) and Contador were next in, ending what was a wet and cold ascent to the line.

However, while Froome maintains his grip on yellow, rivals such as Contador and Nibali appear to be returning to form and will be encouraged by the attacks they put in today. The Pyrenees may be over, but they will head into the remaining nine stages determined to keep the pressure on.

Froome said a brief attack he launched heading towards the summit was to assess how the others were going. “I was just sort of testing – just seeing exactly where everyone was at with just over four k’s to go to see who was on their limit.

“I was hoping maybe one or two guys might just switch off mentally with that acceleration. But it seemed that everyone was still pretty fresh.”

He said that he felt things were under control. “There’s still a lot of racing to come. I’m pretty happy with how the legs are feeling at the moment and … how the team’s been riding. It’s a huge boost of confidence for me having someone like Geraint Thomas [coming with me] all the way to the line.”

The 195 kilometre twelfth stage of the Tour de France began in bright sunshine in the town of Lannemezan and would take the riders across very difficult terrain in the Pyrenees.

The riders were set to face four climbs, starting with the category two Col de Portet d’Aspet (km. 57.5). This was the location of Fabio Casartelli’s unfortunate death after a crash in the 1995 Tour de France, and the riders would pass a memorial to him during the stage.

That climb was followed by the category one pairing of the Col de la Core (km. 93) and the Port de Lers (km. 144). After that the riders would race on to the final hors categorie climb up to the summit finish of Plateau de Beille.

Early on Andre Greipel’s Lotto-Soudal team set the pace in order to deter attacks prior to the early intermediate sprint at Saint-Bertrand-de-Comminges (km 20). Greipel duly delivered there, winning the sprint on his birthday, but the points gained still left him two points short of Peter Sagan in the green jersey competition.

Tinkoff Saxo rider Sagan netted third in the sprint and consequently retained the lead in that classification.

The riders scaled the Col du Portet d’Aspet on what was the 20th anniversary of Fabio Casartelli’s death there. At the top of the climb Preidler beat Durasek to the top points. There, the Team Sky-led peloton was eight and a half minutes back with 93 kilometres remaining.

Kwiatkowski, Preidler and Vanmarcke felt the group was too big and attacked in the valley after the descent of the col de la Core, 76 kilometres from the finish.

However Preidler was experiencing pain in his right knee and was dropped on the Port de Lers. Behind, Bardet, Rodriguez, Fuglsang, Sicard, Izagirre and Meintjes set off in pursuit, while the peloton was twelve and a half minutes back.

The weather got progressively worse and this spurred Kwiatkowski and Vanmarcke on. While they were only five seconds ahead at the top of the Port de Lers, they had one minute 50 seconds over Bardet, Chérel, Rodriguez, Fuglsang, Sicard, Izagirre, Barta and Meintjes by the time they hit the base of the final climb.

Battle on the Plateau de Beille

Kwiatkowski soon showed himself to be stronger and dropped Vanmarcke with 13.8 kilometres left. Fuglsang surged a couple of kilometres later, trying to get a gap, but he was covered by Bardet, Rodriguez and others.

He continued to push the pace and his driving reeled in Vanmarcke. They were one minute 20 seconds behind the leader at that point, but a surge by Rodriguez continued to eat into this advantage. This whittled the chase group down to himself, Fuglsang and Bardet.

Behind, Alberto Contador’s Tinkoff-Saxo squad moved to the front, potentially trying to set things up for an attack by its leader.

Kwiatkowski went under the ten kilometre to go banner knowing that his chances of a stage win were being eroded fast. The pursuing trio were visibly quicker and more animated, while he had the look of a rider who was on his last legs.

Stage 11 winner Rafal Majka continued to pile on the pressure in the yellow jersey group, sending riders out the back.

Rodriguez was not happy with the cooperation in the chase group and jumped hard. He got a gap with over eight kilometres left. Fuglsang tried to get back up to him but was able to do so; Bardet was further back, his chances gone.

Rodriguez finally caught Kwiatkowski with 7.7 kilometres left and soon pushed on. Back in the bunch, Majka attacked and opened a gap. Porte chased and got him back, but Majka’s team-mate Contador then surged.

However the Australian was able to gradually reel him in. Next to try was the 2014 Tour winner Vincenzo Nibali (Astana). He got a gap and Alejandro Valverde (Movistar) then surged, trying to get across.

His acceleration caused the group behind to spread out and race leader Froome was initially unwilling, or unable, to follow. Vavlerde was eventually reeled in and things settled down momentarily, but he went again. His jump brought Nibali back but Porte dragged the group up to both of them.

Higher up the slopes, Rodriguez continued to push on, inching upwards towards the summit. He was well clear and certain of victory providing no problems occurred. There was more suspense back in the yellow jersey group, with 2013 runner-up Nairo Quintana (Movistar) next to try. His surge put Porte out the back but Geraint Thomas was able to reel him in.

Froome put in a big burst with approximately four and a half kilometres remaining. Quintana marked him immediately, then Contador and van Garderen got across. A lull followed and Valverde kicked, but Froome covered him.

Quintana tried to get away once again but this was closed down by the race leader. Thomas returned to the front and once again set the pace. Quintana kicked with three kilometres to go, stretching out the group once again. Froome took a couple of seconds to react but once he got back up to him, this led to another stall.

Out front, Rodriguez crossed the line for an emotional win. Fuglsang was next over at one minute 12 seconds, then Bardet finished one minute 49 seconds back.

Various other riders who had been in the main break came in before the yellow jersey group, which was led in by Valverde. There was no serious change to the general classification, but an apparent increase in form by some of Froome’s rivals raised expectations that there could be some very good racing in store. 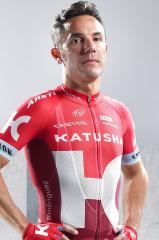