The remnants of the day-long breakaway were caught by the peloton on a steep final climb, just 300 metres before the finish. When that climb flattened out, 200 metres from the line, Van Avermaet and Sagan emerged together, having gapped the rest of the field.

Sagan appeared in the box seat, sitting in Van Avermaet’s slipstream, but the Slovakian wasn’t able to come past, leaving Van Avermaet to celebrate an impressive victory.

“I was a few times close this year in the Classics so I came here for winning a stage,” Van Avermaet said. “I survived the Pyrenees with this kind of stage in my mind … [and] I’m really happy that I made it. Coming here and winning a stage in the Tour is one of my dreams.”

Van Avermaet admitted that he started his sprint a little early but the Belgian was strong enough to hold on for victory.

“I saw there was still one rider in my wheel,” Van Avermaet said. “It was 200 metres to go and I was really dead … but I was just hoping he didn’t come over.

“He didn’t come so I was really happy that I could hold it and have a victory like this.”

Today’s result is another near-miss for Peter Sagan who has now finished second on four occasions in this year’s Tour. He has also finished third on two occasions and fourth on another two stages.

“I [lost] the race for my mistake,” an irate Sagan said after the stage. “I don’t lie — if I lose because I don’t have legs I can [say] it’s not my day. But today I was waiting too much.

“I was trying to get on Greg’s wheel and when I caught him I sat down and then I didn’t have any more legs. If I continued to push maybe it would be different. That’s why I’m a little bit angry.”

Jan Bakelants (Ag2r-La Mondiale) finished third on the stage, three seconds behind Van Avermaet and Sagan, while Chris Froome (Sky) was sixth, maintaining his healthy lead in the general classification. In fact, despite today’s tough uphill finish, the top 10 in the GC remains unchanged after stage 13.

With three days in the Pyrenees behind them, the riders of the 2015 Tour de France made their way north east from Muret to Rodez on stage 13. Temperatures hovered between 35 and 40 degrees celcius through much of the 198.5km stage; the first of three transition stages between the Pyrenees and the Alps.

After three tough days in the mountains the peloton seemed content to let the breakaway enjoy some time in the (hot) sun. The six leaders got to 4:20 ahead in the first hour of racing, before the gap stabilised at between 3:30 and 4:00. In the peloton, Giant-Alpecin took responsibility for controlling the race, riding in support of John Degenkolb’s ambitions of a stage victory.

At the day’s intermediate sprint in Laboutarie after 92.5km of racing, Thomas De Gendt took maximum points from the break. Andre Greipel (Lotto Soudal) sprinted to seventh place in the peloton, 3:30 behind the leaders, moving himself back into the virtual lead of the points classification.

Giant-Alpecin continued to do the majority of the pacemaking as the race entered its second half. With 114.5km covered and 84km to go, the gap was out to 4:45 but it would soon come down again.

Cyril Gautier had a puncture in the break with roughly 80km to race but he was soon back up with the rest of the breakaway. When the leaders hit the third-category Côte de Saint-Cirgue climb with 67.5km to go — the first of three categorised climbs on the day — De Gendt took the two KOM points on offer ahead of Geniez.

After more than 100km spent policing the front of the peloton, Giant-Alpecin finally got some support from Tinkoff-Saxo with a little more than 60km to race. Around that time last year’s runner-up, Jean-Christophe Peraud (Ag2r-La Mondiale) crashed, taking skin off his left arm and leg. He would receive some attention from the race’s medical staff before returning, eventually, to the peloton.

The six leaders’ advantage hovered around 3:25 between 60 and 50km to go as Tinkoff-Saxo and Giant-Alpecin did the pacemaking. In that time Vincenzo Nibali (Astana) had a puncture and was paced back to the peloton.

On the Côte de la Pomparie, with 42km to race, Alexandre Geniez took the one KOM point on offer. Two kilometres later the six leaders’ advantage was down inside three minutes and dropping quickly.

The day’s final classified climb, the Côte de la Selve, came with a touch over 30km to race and it was Wilco Kelderman who took the one point on offer. Behind him and the rest of his breakmates, Orica-GreenEdge was joining the chase with Svein Tuft pulling on the front of the bunch. The lead continued to fall, dropping inside two minutes with 30km to the finish in Rodez.

Nathan Haas attacked the break with 24km to go but was caught less than 6km later as the peloton continued to close in, 1:45 behind. But with the gap still beyond 1:15 with 15km to go, the break looked like it still had a chance.

An uncategorised climb 15km from the finish proved decisive — another attack from Nathan Haas was quickly marked then countered by Wilco Kelderman as Cyril Gautier got across to follow the Dutchman. Thomas De Gendt made it across as well, leaving three at the front of the race as the remainder of the breakaway drifted back to a thinning peloton.

MTN-Qhubeka and Orica-GreenEdge were among the most active teams as the finish line approached, and with Giant-Alpecin contributing to the chase as well, the gap came down inside one minute with 11.8km to go.

With 10km to race the three leaders had 50 seconds — as Chris Froome made his way towards the front of the peloton — and with 5km to go the leaders had 26 seconds.

The gap continued to fall as a strung-out peloton kept the pace high on the downhill approach to town.

“What started off as quite an easy, steady stage turned crazy by the end,” Chris Froome said. “I think the guys started panicking that they weren’t going to catch the breakaway and it was just race-on all the way to the finish.”

With 2km left to race the three leaders had just 14 seconds between them and the peloton, setting things up for an exciting finish. Katusha came to the front for the first time with 1.5km to go, as Etixx-Quick-Step also started to make their presence felt.

When the three leaders hit the final climb, Kelderman wasted no time, making his move with roughly 400 metres to the line. But with a quickly fragmenting peloton closing fast, Kelderman and the rest of the break was swept up with 300m to go.

When the road flattened off it was Van Avermaet who led Sagan towards the line. What looked to be a near-certain victory for the Slovakian wasn’t to be as Van Avermaet powered home to take an impressive victory.

Stage 14 of the 2015 Tour de France is another ‘transition stage’ between the Pyrenees and the Alps, but another day with a far-from-easy finish. The final 3km of the 178.5km stage into Mende rise at an average gradient of 10%. Overall leader Chris Froome believes it will be a day for the GC leaders.

“[On] today’s stage with just a 500 metre climb we [could already see] there were gaps opening up,” Froome said. “I think on a climb like Mende … 3km at over 10%, we can definitely expect the GC contenders to try something.” 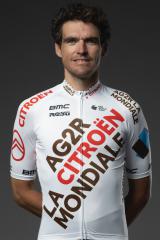