Vuillermoz followed a move by overall leader Chris Froome (Sky) with 900m to go in the stage before counter-attacking and getting enough of a gap to win the day by five seconds.

“I had targeted Mur de Huy and Mûr de Bretagne,” he said afterwards. “It was pretty good to be third in Huy. Today, I was prepared for losing and taking risks for winning. I decided to attack twice, firstly in the steepest part, secondly after I had recovered a bit and Chris Froome had accelerated.

“I knew this kind of finish suited me as I am a punchy climber.”

The only rider to respond to Vuillermoz’s attack was Dan Martin (Cannondale-Garmin) who powered away from the peloton in the closing stages but wasn’t able to catch the Frenchman. Martin bashed his handlebars in disappointment as he crossed the line for second while Alejandro Valverde (Movistar) lead the remnants of the peloton over the line to finish third.

Chris Froome finished eighth on the stage, 10 seconds behind Vuillermoz, but with the same time as second-placed Peter Sagan (Tinkoff-Saxo). That result ensures Froome will wear the maillot jaune for a third day in this year’s Tour.

“Honestly, I didn’t try to show any dominance in the last climb” said the Briton, who complemented the stage winner. “I was up there to keep a good position and to keep an eye on everyone, in case someone would jump.

“It was a relatively short climb and I knew there wouldn’t be big differences. I wanted to stay at the head of the affairs. I was surprised to hear that Nibali lost contact, given that after the crosswinds it was easier to stay in the wheels with head wind.”

Sagan’s fourth place on the stage — his sixth top-five result in eight days — means the Slovakian moves into the lead in the green jersey of points classification leader.

Another day of perfect weather awaited the riders in the town of Rennes for stage 8 of the Tour de France. The stage would see the peloton cover 181.5km through Brittany, ending with the challenging 2km climb up the Mur de Bretagne.

It took a few kilometres for a stable breakaway to be established but when it was, the peloton eased off the pedals and allowed Sylvain Chavanel (IAM), Bartosz Huzarski (Bora-Argon 18), Romain Sicard (Europcar) and Pierre-Luc Perichon (Bretagne-Seche) to put some time between them and the bunch.

The quartet’s lead peaked at 3:30 after just 15km and was kept under control from that point on. Lotto Soudal’s Thomas De Gendt did a mountain of work on the front of the bunch to keep the leaders on a tight leash and with 100km to race, the gap was down to 2:10.

The first of the day’s two categorised climbs came with 81km to race, and it was Romain Sicard that took the single KOM point on offer over the fourth-category Col du Mont Bel-Air.

At the day’s intermediate sprint on the Gare de Moncontour, the fast-men emerged from the peloton to sprint for fifth place and beyond. Dual stage winner Andre Greipel (Lotto Soudal) took the points, followed by John Degenkolb (Giant-Alpecin) and yesterday’s victor Mark Cavendish (Etixx-Quick-Step).

Soon after the intermediate sprint there was a flurry of attacks in the peloton as a 17-rider group got clear of the main field. Among the group were Sagan, Greipel, Degenkolb, Cavendish, Bryan Coquard (Europcar) and several other big names. The group caught up to the four leaders with 69km still to race as Sky and Cannondale-Garmin took up the chase in the peloton, having missed the move.

With 63km left to race, Lars Bak attacked out of the lead group and was joined by Michal Golas (Etixx-Quick-Step) and Bartosz Huzarski. As the new leading trio built their advantage, the remainder of the previous 21-rider lead group drifted back to the peloton and were reabsorbed with 56km left to race.

For much of the next hour Cannondale-Garmin took responsibility for chasing down the breakaway, the US squad hopeful of a stage victory for Dan Martin.

With 35km to go the gap was hovering around the one minute mark and by 20km to go it was down inside 30 seconds. At that point Tinkoff-Saxo, Movistar and Lampre-Merida started moving their protected riders up to the front, working for a good position ahead of the final climb.

Bak, Huzarski and Golas still had an advantage of 30 seconds with 12km to race and with Cannondale-Garmin still on the front of the bunch. Huzarski was dropped from the break on a short climb with 10.5km to go as Tinkoff-Saxo and Astana started to contribute to the chase behind.

Etixx-Quick-Step and BMC joined the pursuit inside 9km to go and one kilometre later, the two remaining leaders were swept up by the BMC-led peloton.

The GC favourites could be spotted near the front with 5km to race after which Tinkoff-Saxo took responsibility for keeping the pace nice and high. Sky took control with 3km to go, leading the bunch into the third-category Mur de Bretagne climb with 2km to go.

Sky drove the pace on the lower slopes before Giant-Alpecin took up the reins. A three-rider group opened up a small gap with a little more than a kilometre to go but they were shut down by the maillot jaune, Chris Froome.

Having shut down the move Froome attacked with 900m to go, as the likes of stage 3 winner Joaquim Rodriguez (Katusha) and Peter Sagan sat on his wheel.

But with the big stage favourites and the GC contenders looking at one another, a counter-attack from Alexis Vuillermoz went unchecked and the Frenchman powered away towards the line. Dan Martin (Cannondale-Garmin) attempted to bridge the gap but left his run too late, finishing five seconds behind a jubilant Vuillermoz.

Alejandro Valverde finished third as he led home a 25-rider chase group featuring most of the GC contenders. A noticeable omission from that group, however, was Vincenzo Nibali (Astana) who was left without any teammates in the closing stages before being dropped and losing 20 seconds to Froome, Nairo Quintana (Movistar) and Alberto Contador (Tinkoff-Saxo).

The 2015 Tour de France continues tomorrow with the much-anticipated stage 9 team time trial. The 28km stage takes the riders from Vannes to Plumelec and features three climbs along the way, including a challenging 1.7km climb to the finish.

BMC goes into the team time trial as leader of the teams classification and as the favourite for the stage. Team leader Tejay van Garderen sits just 13 seconds off the yellow jersey and could well lead the race overall going into the first rest day. 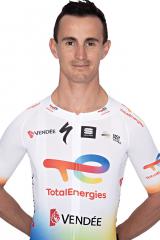