Just six days after completing his first Tour de France, the 22 year old who also won the Tour of Turkey, crossed the line in surprise as he confirmed he had in fact won the biggest race of his young career.

Attacking from the peloton on the final climb with just ten kilometres to go, Yates didn’t realise he had been the lead rider on the road as he approached the finish line.

“I spoke on the radio to my sport director but because of the crowds the radio was too quiet.

“On the final climb there was a breakaway still up the road. Then there was a lot of carnage on the climb, there was a crash with a motorbike, and so I just went full gas.

“At the time I didn’t know if I had reached the lead or not.”

Yates returned to the Spanish one-day race 12-months after riding himself into a winning position over the final climb only to crash and suffer concussion on the final descent to the line.

“For sure this is the biggest win of my career,” Yates said. “And it’s my first victory this year.”

A group of eight riders formed the initial move of the day but their advantage was kept in check by Team Movistar so never looked threatening for the win.

With 60km to go, the leaders hit the Alto de Jaizkibel climb for the second time with an advantage of just two minutes. Behind, the counter attacks began.

The initial counter involved four riders, before a further group of six also took off. The majority of the moves joined together in front to make a new lead group of 16 riders.

Team Katusha joined Movistar for the chase in the peloton and with around 30km to go the race was back together.

Another group of nine riders escaped prior to the final climb but splintered on the ascent. Van Avermaet attacked on climb and had 15 seconds over his chasers with 600 meters to go when the “radio tour” moto ran into him from behind.

“It was a steep climb and the moto driver was too close to me,” Van Avermaet said. “He ran right into the back of my bike. My frame was broken and my back wheel was broken. So the race was over for me. I don’t know know what the moto driver was thinking. He did not say anything to me. Maybe he just gave it a little too much gas and ran into me.”

In the confusion, an attack from the peloton by Adam Yates saw him crest the peak with a narrow lead and holding it until the finish.

With the chase group playing cat and mouse behind, Yates held on for a 15 second solo victory.

“The bad thing is that I think I could have won the race,” Van Avermaet said. “I had a big gap. Maybe Yates could have come back, but I think I still could have been there in the sprint. It is not every year you can win a classic like San Sebastian. So this is really disappointing.” 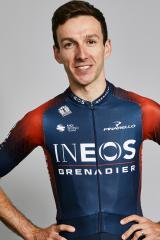