Unleashing a superb attack 2.3 kilometres from the end of the stage, Orica GreenEdge rider Esteban Chaves notched up his second stage victory in the Vuelta a España.

The Colombian climber replicated his stage two win and, once again, took the race leader’s red jersey as a result.

Chaves’ attack saw him close down on MTN-Qhubeka’s Steve Cummings, who attacked out of the day’s break in a bid to add Vuelta success to his Tour de France stage win.

Chaves went past Cummings with 2.1 kilometres to go and while Dumoulin jumped out of the group of main contenders to try to protect his race lead, he was unable to close. He was joined by Irish rider Dan Martin (Cannondale-Garmin), who beat him to take second on the stage.

The five second gap between winner and chasers and the bonus for hitting the line first put Chaves ten seconds ahead of Dumoulin. Martin moved from fourth to third, displacing his first cousin Nicolas Roche (Sky). They are 33 and 36 seconds back respectively.

“I can’t believe this. It is unbelievable,” said the stage winner and new race leader. “Today was a really hot stage, a really long one. In the middle of the stage I spoke to Matt Hayman. He told me if I have good legs, you race, as you never know what happens tomorrow.

“Neil Stephens told me that the first 500, 600 metres is really steep. In this part I had really good legs, and Daryl [Impey] put me in a great position. Andrey Amador from Movistar was pushing a hard pace. He was fourth in the Giro…I looked at his face, I saw he was not comfortable, and so I tried. And it worked.”

Stephen said that the team wasn’t expecting what he referred to as a great success on stage six. “We were trying to maintain our position. But Esteban takes advantage when he can.”

The team had a very frustrating Tour de France, mostly due to injuries. However, after just six days of the Vuelta, the team has clocked up three stage wins between Chaves and Caleb Ewen, and also held the race lead for two separate periods.

He said the pressure is now off. “Whatever he does [next] is fantastic. It is just a fantastic week for us, we are over the moon. Let’s just try to enjoy the day and take the rest of the race after that.”

The 200.3 kilometre sixth stage began in Cordoba and ran to the uphill finish of the Alto de Cazorla. The profile was constantly undulating but, deceptively, the route had just two official climbs. Both were category three ascents: the first was the Alto de Baeza at kilometre 144.5, with the second being the finishing ramp.

However the work he put in to close down on the break fatigued his legs and he was dropped soon afterwards. He kept plugging away and managed to get back up to the five others.

With 90 kilometres left the break’s lead was up to four minutes 40 seconds. Race leader Tom Dumoulin’s Giant-Alpecin team was chasing hard and was aided by the Movistar team on the first climb. The slopes and this collaboration cut the advantage down to just over three minutes and, with 15 kilometres left, the break was less than a minute ahead.

Rubiano attacked but was countered by Cummings, who headed under the ten kilometre to go banner with a lead over the others. Terpsra tried to chase but was unable to bridge.

With three kilometres left Cummings had a 20 second advantage. Orica GreenEdge and Cofidis were chasing hard behind, trying to set up their riders for the finish. The explosion in pace and the uphill slopes chomped into Cummings’ advantage and made it increasingly unlikely he would stay clear.

With 2.3 kilometres left former race leader Esteban Chaves attacked hard and got a gap. He rocketed across to Cummings, bridging with 2.1 kilometres to go, and continued past.

Behind, race leader Tom Dumoulin’s Giant-Alpecin team were leading the chase then, with 1.7 kilometres left, Dumoulin himself jumped clear and tried to close the 11 second gap.

Chaves had no intention of being caught, though, and went under the kite with a 14 second advantage. Behind Dan Martin (Cannondale-Garmin) attacked hard, followed by a Cofidis and a Katusha rider. He kicked again and went clear of those, getting across to Dumoulin.

Chaves was too far ahead, however, crossing the line five seconds ahead of Martin and Dumoulin, retaking the leader’s jersey as a result.

He gave thanks to the other Orica-GreenEdge riders afterwards.

“I am really happy and I want to stay again, the team is amazing. The team stayed with me all day. The whole team is really good.

“Caleb won yesterday, and today went for the bottles. This team is like a family, it is really, really good.”

The Vuelta a España continues Friday with the first big mountain stage, a 191.1 kilometre race starting in Jodar, taking in the third category climb of the Puerto de Blancares (km. 87) and then concluding with the category one climb of the Alto de Capileira. 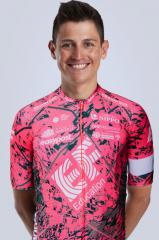