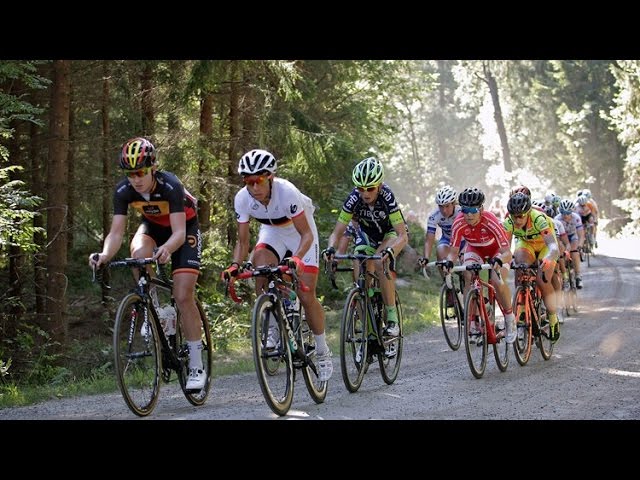 Jolien d’Hoore (Wiggle Honda) sprinted to victory at the Crescent Vårgårda Road World Cup on Sunday ahead of teammate Giorgia Bronzini, who played the role of wheel sweep to perfection. Lisa Brennauer (Velcoio-SRAM) came off her team’s sprint train to take third.

“In the last kilometre, Gio was on my wheel the whole time,” d’Hoore told Ella CyclingTips before the podium presentation. “I took the perfect position in the last corner. I started my sprint with 200 to go maybe. It was the perfect scenario.”

The World Cup win in Vårgårda is d’Hoore’s second World Cup victory of the season. The 25-year-old won Ronde van Drenthe, the series opener, back in March. She pulled on the World Cup leader’s jersey back in March, lost it after the second round of the World Cup in Cittiglio, which she skipped, but took it back following her second place finish in Flanders. She lost the jersey in Flèche Wallone to Anna van der Breggen (Rabo Liv) in April but Sunday leapfrogged up to the top of the standings to pull on the distinctive white jersey yet again.

With one final World Cup round remaining, d’Hoore leads van der Breggen by a mere six points – 391 to 385. Lizzie Armitstead (Boels-Dolmans), who has led the World Cup series since round six in Philadelphia, dropped down to third with 364 points. Elisa Longo Borghini (Wiggle Honda) is now fourth overall with 320 points. Lucinda Brand (Rabo Liv) rounds out the top five with 297 points.

“The plan was not to go to Plouay, but maybe we have to think about it now,” said d’Hoore, referring to the final round of the World Cup series next weekend. “That’s not my kind of race. We have other riders that could do well in Plouay like Giorgia or Elisa. Maybe it’s possible Elisa can still win the classification. We’ll need to see.”

A new large loop of 56.5 kilometres that came before seven laps of the 11.5-kilometre circuit was intended to liven up the ninth round of the Road World Cup series here in Vårgårda. Instead the consensus was that the addition of the large loop and consequential reduction in number of small laps completed made in fact for an easier race.

“The large lap changed things a little bit,” said Bronzini. “I think it made the race less stressful. The large lap was hard but the circuit is more technical. There are more crashes and more attacks. It’s not usual for this race to end in a sprint like it did today.”

A much-discussed gravel section in the middle of the large lap did minimal damage. There was a crash toward the back of the peloton just as the race entered the gravel. Around 10 riders were spotted on the side of the road as the caravan rolled past, and the race radio later reported two riders involved in the crash as withdrawals. While several small groups came unglued from the main bunch over the gravel, the descent that followed offered ample opportunity to latch back onto the peloton before the finish circuits.

“The gravel was pretty good,” said d’Hoore. “It came halfway in the race. If it was in the final, maybe it would be something different, but today it was alright.”

The peloton caught Elena Berlato (Alé Cipollini), the lone breakaway rider, over the first passage of the finish line in downtown Vårgårda to start seven laps around the 11.5-kilometre circuit. Each lap included winding and narrowing roads, tight turns, constant undulations and one short but sharp climb. In recent years, constant attacks have broken the peloton to pieces as the laps counted down until eventually a small breakaway of overall contenders would slip away to do battle until the finish.

“I never thought it would be a sprint today,” noted d’Hoore. “For a few years, it’s always been that some riders get away in a small breakaway. That’s what I thought would happen today. I thought Anna van der Breggen would attack super hard on the last climb. I was waiting and waiting but nothing really happened. I was happy about that, of course.”

Although Boels-Dolmans assumed control at the front of the field between each passage of the finish line and the short, punchy climb, they were unable to force a break. Attacks by Trixi Worrack (Velocio-SRAM) and Ashleigh Moolman (Bigla) were neutralised. A headwind up the climb combined with a blistering fast pace on the run-in toward the finish provided a challenge for the would-be escape group.

Every ascent of the main climb saw riders lose contact with the back of the bunch, yet the peloton remained didn’t see a significant reduction in numbers until the last lap. The final time up the climb, the peloton split into several groups with a front group of 25 riders taking shape.

“I felt pretty good today,” d’Hoore said. “Everyone was suffering on the climb, also me, especially on the last lap. I was thinking: ‘It’s only three minutes of suffering. If you can pass that, you can hold it until the finish.’ And that’s what I did.“

Although Boels-Dolmans and Rabo Liv each launched multiple attacks in the final kilometre, their efforts were not enough to prevent a reduced bunch sprint. Coming into the flamme rouge, the sprint trains had begun to jostle for control.

“In the end, me and Jolien understood it was going to be a sprint,” Bronzini said. “Liv started the lead-out. Rabo and Velocio were after them. Then it was me and Jolien. Into the last corner, Jolien decided to stay with Velocio, and this brought her up to third wheel, and I was into fourth.”

“Me and Gio were talking on the second to last lap,” added d’Hoore. “She said to me: ‘I can do my own sprint and be on your wheel, and if you are slowing down in the finish, I will pass you. But otherwise you do your own sprint, and I have your wheel.’ That’s what we did. I was slowing a bit, but I could hold it to the finish line.”

The win in Vårgårda marks a continuation of d’Hoore’s steady rise in ranks on the road. She’s snagged stages at the Energiewacht Tour and Aviva Women’s Tour alongside one-day race wins at Diamond Tour, Omloop van het Hageland and, of course, Ronde van Drenthe World Cup. She repeated as Belgian national road champion and claimed the overall win at BeNe Ladies Tour after winning three of the four stages. Perhaps just as impressive as d’Hoore’s wins are her podiums. She was runner-up at Tour of Flanders, La Course and on the Aviva Women’s Tour overall. She’ll head to Richmond, Virginia next month as a favourite for the rainbow jersey.

“It’s my first World Championships, which is exciting,” said d’Hoore. “I have never raced at that level of competition before. With a lot of turns, a couple small climbs and even some cobblestones, the course is almost Belgian. I very much look forward to it.”