After twice being in breakaways during the Vuelta a España, things paid off at the third attempt for Bert-Jan Lindeman, who soloed to a fine victory at the end of stage seven.

The Dutch LottoNL-Jumbo rider reached the finale at the Alto de Capileira with breakaway companions Ilia Koshevoy (Lampre-Merida) and Jerome Cousin (Europcar). After each launched attacks on the final climb, the trio came back together but Cousin lost his chance when he came to a sudden halt.

He clipped Koshevoy’s rear wheel and his bike began to topple, forcing him to put his foot down to prevent a crash.

Lindeman thundered clear and reached the line nine seconds ahead of Koshevoy. To compound his misery, Cousin was overhauled by Fabio Aru (Astana), the best of the general classification contenders.

The Italian attacked alone and finished 29 seconds back, five seconds ahead of the frustrated Frenchman.

Rafal Majka (Tinkoff Saxo) came in 36 seconds back, leading a group comprising most of the general classification contenders. Present were the riders who had been in the top five starting the stage, but missing were Dani Moreno (Katusha) and Chris Froome (Sky), who had been sixth and seventh on Friday morning.

They rolled across the line one minute and three seconds back, conceding 27 seconds to their big competitors. Dropping even more time was BMC Racing Team rider Tejay van Garderen, who was a further 22 seconds behind.

“Today finished with 20 kilometres of climb,” said the ongoing race leader Chaves, acknowledging that he had passed a big test. “The team is unbelievable, they stayed with me all the stage. They all worked really well, keeping me out of the wind and giving me water.

“I am very happy to have another day with the red jersey. Every day with it is an important day. It is a big responsibility but I have a really good team. These guys have really good experience and tell me really important things. We worked really hard.”

Stage seven marked the first big mountain finish of the race. The 191.1 kilometre race started in Jodar, took in the third category climb of the Puerto de Blancares (km. 87) and then concluded with the category one climb of the Alto de Capileira.

Hard chasing behind tipped the balance and saw the advantage hacked down to five and a half minutes by the start of the last climb, making it possible the break would come back before the finish.

However the pace eased and this was enough for Cousin to seize the opportunity. He jumped away from the other four in the break and while Txurruka dragged him back, he was able to get away again in response to a surge by Koshevoy.

Lindeman was also able to bridge and after some jumping around between them, they came together inside the final kilometre. Cousin was determined to try to win, not least with the uncertainty about his team’s future, but came to a sudden halt before the final sprint started.

Lindeman then jumped hard and was able to gap Koshevoy, reaching the finish line nine seconds ahead.

Further back, Aru had attacked the Chaves group and was gaining time, moving quick enough to pass by Cousin for third. In contrast, Froome, Moreno and van Garderen were all losing time and would slip down the general classification as a result.

The Vuelta a España continues Saturday with a 182.5 kilometre stage from Puebla de Don Fabrique to Murcia. Largely downhill for the first 11 kilometres, it features two ascents of the category three Alto de la Cresta del Gallo (kilometre 146.5 and 165.2) prior to a flat sprint to the line. 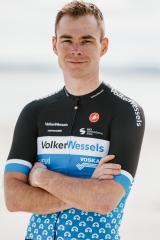