Weeks after taking its first Grand Tour stage win in the Tour de France, the MTN-Qhubeka team added a second victory when Kristian Sbaragli nabbed stage ten in the Vuelta a España.

The Italian did things perfectly in a reduced bunch sprint to the line in Castellón, speeding home first. John Degenkolb, whose Giant-Alpecin team did the bulk of the work in the finale to try to set him up, got boxed in and ran out of time. He finished half a wheel back, while JJ Rojas (Movistar) took third.

“It’s a dream come true for me,” said a delighted Sbaragli, a 25 year old from Empoli who joined the team in 2013.

“Already four times in the Vuelta I tried to do my sprint, and when I crossed the finish line I couldn’t believe it. It is a dream for me and for MTN. We won a stage in the Tour de France and won a stage here.

A factor in his victory was making the selection after the peloton scaled the second category Alto del Desierto de las Palmas. This peaked 17.1 kilometres from the line and thinned out the list of contenders.

“I fought really hard to be there two days ago,” he said of the similar finale into Murcia, where he was fifth. “I was surprised to be in the front with 40 riders then. I did my sprint too early and they passed me.

“Today, when I saw 200 metres to go, I said now or never. It is the dream of every rider to win a stage in a Grand Tour. Today my family was here, my girlfriend. I want to say thanks to her as she always believed in me.”

Race leader Tom Dumoulin finished in the same group and ended the day with the same 57 second advantage over Joaquim Rodriguez (Katusha) that he had enjoyed before the start. Esteban Chaves (Orica GreenEdge) stays third, 59 seconds back, while Nicolas Roche (Sky), Fabio Aru (Astana) and Alejandro Valverde (Movistar) remain fourth, fifth and sixth.

The parcours of the 146.6 kilometre tenth stage extended from Valencia to Castellon and the effort was set to begin very quickly with gradually rising roads. These would peak atop the third category Puerto del Oronet (km. 29), after which a descent plus over 20 undulating kilometres would follow.

The day’s intermediate sprint was located after a long section of flat road and, after that gallop at Benicasim (km. 121.3), the second category Alto del Desierto de las Palmas (km. 129.5) reared up. The summit was located 17.1 kilometres from the line, thus making it possible for some regrouping to take place.

That first climb proved to be the launching pad for a massive 40 man group to get away. However, despite the fact that all of the teams were represented, the elastic never snapped and things came back together with just under 60 kilometres remaining.

The high pace did see one casualty: Caleb Ewan (Orica-GreenEdge) was fatigued in what is debut Grand Tour and retired from the race. He is just 21 years of age and is satisfied with the win he clocked up on stage five.

Sky’s Nicolas Roche also found himself under pressure, going down in a crash with just over 50 kilometres to go. He had started the day fourth overall and was understandably concerned at the prospect of losing time. Together with his Sky team he was able to return to the bunch.

Niki Terpstra (Etixx – Quick-Step) was next rider to attack, but he was unable to stay clear of the group.

BMC Racing Team’s Alessandro De Marchi had better luck on the final climb, clipping away and getting a gap. Romain Sicard (Europcar) latched on, after which Kenny Elissonde (FDJ) and IAM’s Jerome Coppel got up to them. Elissonde then attacked to take the points at the top.

He was joined by De Marchi and Sicard over the summit and together they hurtled down the descent with a half-minute lead over the bunch.

Gianluca Brambilla (Etixx – Quick-Step) attacked the bunch to try to get across but he was chased down by the race leader Tom Dumoulin, who was trying to set up team-mate Degenkolb.

Inside three kilometres to go Lotto Soudal’s Adam Hansen attacked. This move was covered and, despite surges by other riders, the bunch remained together until the sprint.

Etixx-QuickStep led out the sprint but Sbaragli was the one who had the right combination of position, timing and oomph. Degenkolb had been hemmed in and finally made his way through inside the final 100 metres, but came up half a wheel short.

The riders will now have a rest day in Andorra prior to the resumption of the race with a staggeringly difficult 11th stage between Andorra and Els Cortals de Encamp. It features no less than six climbs, including the first category battle to the line. 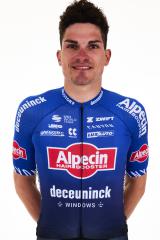