With a strong climbing ability plus a well-known turn of speed, Alejandro Valverde was always seen as a potential victor on stage four of the Vuelta a España and that’s precisely how things turned out.

Valverde took on other riders who are also known for their abilities on punchy finishes, namely Peter Sagan (Tinkoff-Saxo) and Dani Moreno (Katusha). The Movistar co-leader beat the Slovakian and the Spaniard to the line in Vejer de la Frontera, winning out of what was a 25 man front group.

Sagan did his utmost to follow up on Monday’s win with another success, but appeared to run out of ground before the line.

The trio overhauled Sky’s Nicolas Roche, who had attacked to cover a move made by Samuel Sanchez (BMC Racing Team) inside the final two kilometres. Roche sat on Sanchez’s wheel until the road kicked upwards again and then went, but he was unable to hold off the three quickest riders behind.

Race leader Esteban Chaves (Orica-GreenEdge) finished tenth and held onto his red jersey. He remains five seconds clear of Tom Dumoulin (Team Giant-Alpecin) and 15 ahead of Roche, while the ten second win bonus picked up by Valverde bumps him up from seventh to fifth overall.

He is now 28 seconds back in the general classification.

Valverde said after the stage that his team decided to hold back and wait until the end before playing its card.

“I was seeing that neither Bilbao nor Samuel Sánchez and Roche were opening a serious gap, and I kept Sagan under control. As the shadow on the ground showed him on my wheel, I didn’t have to look back.

“I knew he was strong, but into such a finish, with 200m to go, when Majka jumped away and closed the gap… you can suffer some sort of misfortune, but it was clear to me that this victory was mine, or at least I had a really strong chance.

“More than the bonus seconds I took, I’m happy because of this win, which makes my team-mates so confident about our chances.”

The 209.6 kilometre stage began in Estepona and lacked any classified climbs. That statistic was misleading, though, as the final five kilometres were tough and featured two uphill sections before the line.

These rapidly gained time over the unconcerned peloton and after 30 kilometres they were almost 14 minutes clear.

Early on Chaves’ team rode at the front, aided in part by Katusha and Movistar, and this collaborative effort trimmed the lead back considerably.

Later on Tinkoff-Saxo rolled to the front and started working for Sagan, believing in his chances after what was his first Grand Tour stage win in two years on Monday.

The break’s advantage was whittled down to a minute, prompting Engoulvent and Irizar to play their cards and attack the four others out front. However this attempt was unfruitful, with the bunch reeling them in with 11 kilometres to go.

The momentum continued onto the final climb, where first Tosh Van Der Sande (Lotto-Soudal) and then Pello Bilbao (Caja Rural-Seguros RGA) made solo moves. The latter was caught inside the final two kilometres, then former Olympic champion Sanchez attacked hard on a false flat and quickly got a gap.

Roche was the only one able to bridge and he sat on the Spaniard, gambling that he would keep riding towards the line. Sanchez did so, but the gap was too small for Roche’s subsequent jump to hold off those chasing behind.

Valverde, Sagan and Moreno whipped past and finished in that order, with Chaves close by and holding the lead for another day.

Next up is a flat 167.3 kilometre race between Rota and Alcalá de Guadáira. This seems destined for a bunch sprint, with Sagan likely to try once again. 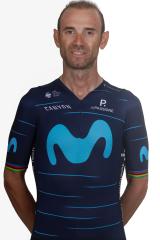