Lampre-Merida’s Nelson Oliveira picked up the first Grand Tour stage win of his career at the end of stage 13 of the Vuelta a España, hitting the line first after he soloed clear from the day’s break.

The Portuguese rider was one of 24 who was up the road and made his move inside the final 30 kilometres of the stage to Tarazona. Those chasing couldn’t coordinate to bring him back and he reached the line a clear minute ahead of Julien Simon (Cofidis), Nicolas Roche (Team Sky), Sylvain Chavanel (IAM Cycling), Jose Joaquin Rojas (Movistar Team) and 18 others.

His victory was due in part to the lack of cohesion behind, an indecision fuelled by the blocking and marking carried out by team-mates Rubén Plaza and Valerio Conti, and also to the same solo ability that has earned him three national time trial titles plus seventh in last year’s world championship TT.

“This is the most beautiful victory in my career,” he enthused afterwards. “I had won the Portuguese championship, such emotional successes for me, but the feelings I had today are something I can’t describe.

“It’s so good to share this joy with my team, from which I have always received a full support, not only today with the perfect help by Valerio and Rubén, but during the whole Vuelta and the whole season.”

The win is the first of the race for the Lampre-Merida team. He said the squad fully deserved some success as it has ridden so aggressively throughout.

“The feelings during the Vuelta have been good,” he continued. “I was in the front of the race in the queen stage too and I tried to attack, but I could not achieve a top result, so I tried today again.

“I attacked maybe too early, but in that moment the breakaway members were recovering the energies and, being aware that I needed to anticipate if I wanted to win, I decided to attack.”

Race leader Fabio Aru (Astana) finished in the main bunch some four minutes 48 seconds back and retained his red jersey.

He stays 27 seconds ahead of closest challenger Joaquim Rodriguez (Katusha) and 30 seconds up on Tom Dumoulin (Giant-Alpecin).

The general classification was largely unchanged, although those in the break gained time and this propelled Gianluca Brambilla (Etixx – Quick-Step) and Romain Sicard (Europcar) into ninth and tenth.

They had been 13th and 12th respectively prior to the stage and their upwards progress displaced Nairo Quintana (Movistar) and Louis Meintjes (MTN-Qhubeka).

With some tough stages behind the riders and more to come, it was always possible that a break could go all the way on Friday’s stage. The course ran 177 kilometres from Catalayud to Tarazona and included three categorised climbs. These were the third category Alto Collado de Oseja (km 53.6), the first category Alto de Beraton (km. 71.9) and the third category Aldo de Moncayo (km. 143.5).

From that point there was is a mainly downhill run to the line.

The start was fast and aggressive, with the day’s move finally going after 40 kilometres of attacks. IAM Cycling’s Sylvain Chavanel was the instigator, sparking things off on the Alto Collado de Oseja. Oliveira and Europcar’s Yukiya Arashiro recognised the opportunity and tagged along.

Together the 24 riders extended their lead to over four minutes, with Aru’s Astana team making sure that the gap didn’t grow too large.

On the final climb the group cohesion of the break changed to individual ambition and Chavanel and Oliveira played their cards.

Poljanski had other thoughts and led over the top. He was hauled back on the way down and Oliveira went again, this time getting a lasting gap.

He powered on towards the finish and hit the line a cool minute clear of Simon, Roche and the others, who were kicking themselves to miss out on the win.

Stage 14 covers 214 kilometres between Vitoria and Alto Campoo. Fuente del Chivo. It begins on undulating roads and gets progressively more difficult, with the second half of the stage featuring the category three Puerto de Estacas de Trueba (km. 118), the category one Puerto del Escud – Provincia de Burgos (km 158.5) and the hors category Alto Campo. Fuente del Chivo, a 18 kilometre climb up to the line.

This will be the first real test for Aru since taking the red jersey, and will also put a magnifying glass to the form of Nairo Quintana (Movistar), who was briefly dropped on Friday due to the effects of a recent fever. 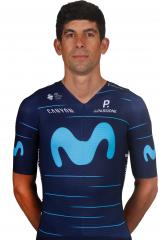