He’s been on the deck more than once in the Vuelta, and even had an additional dash of bad luck early on Thursday when he was stung by a wasp. However things finally worked out for Nicolas Roche, who made up for his earlier misfortune when he won a two-man sprint into Riaza.

The Team Sky rider beat the Spaniard Haimar Zubeldia (Trek Factory Racing) in their gallop to the line, clocking up the second Vuelta a España stage win of his career.

Both riders were part of a large breakaway group that went clear early in the 204 kilometre stage, with these 25 riders building a solid lead before the final climb. Europcar’s Cyril Gautier went clear before the Puerto de la Quesera, but he was caught and dropped by Roche.

The Irishman was in turn joined by Zubeldia, and together the duo hurled down the descent and into Riaza, where Roche won the gallop to the line.

“There was a rider about 20 seconds behind and so I said let’s just ride all the way and we will do a mano-a-mano sprint,” he said in his post-race TV interview. “The two of us were actually really co-operating well already since the 15 kilometre to go sign. The two of us really gave it a lot and I think that was our only chance.”

Roche lost his GC chances through the crashes he has been in. He also has had a number of near misses in the past couple of seasons, and was determined not to get things wrong tactically.

Because of that, he decided to ride his own race in the final kilometre.

“Coming into the sprint I wanted to lead out as Haimar is someone with a lot of experience,” he explained. “I have lost a few sprints against him in the past…a few times in San Sebastien, for example. I didn’t want to have a slow-start sprint, I wanted a pretty high speed one. So I thought that I would try and manage my own pace.”

He said that he was relieved that things went to plan, not least because of the past close calls. “For once I didn’t mess up. I have had a few seconds and thirds. I was always lacking that small thing in the finish and today it finally worked out.”

Overnight race leader Tom Dumoulin (Giant-Alpecin) came under repeated attack from Fabio Aru on that last climb. The Astana rider went all-out to try to overcome his three second deficit, but each time the Dutchman covered his move.

Other general classification riders were also active on the Puerto de la Quesera but nobody was able to get a lasting gap. They consequently arrived together at the finish, 38 seconds behind Roche and Zubeldia and 20 seconds behind the third-placed José Gonçalves (Caja Rural-Seguros RGA).

Dumoulin maintains his small lead over Aru, and seems to be gaining in confidence.

“We did very, very well with the team,” he smiled. “There was a strong break in front but it was a good break for us. It was a good day.

“Today Aru tried to really take the red jersey. He tried very hard but I actually was never in trouble. After his first attack I knew I would probably keep the red jersey for today.

“I was pretty confident, it was nice to have a strong team behind me. It was a good day.”

Following the stage 17 time trial, the Vuelta a España continued Thursday with a 204 kilometre race between Roa and Riaza. While it was another climbing stage but lacks the severity of the days before, with just three climbs.

These were the category three pairing of the Alto de Santibañez de Ayllón (km. 82.8) and the Alto del Campanario (km. 99.5), plus the first category Puerto de la Quesera (km. 191). While the latter was in theory tough enough to shake things up, the summit was located 13 kilometres from the finish, giving dropped riders the chance to come back before the end.

From this group, Madrazo would pick up maximum points on the two category three climbs.

The gap increased to over six minutes but as De Clerq had started the day 14th overall, 13 minutes 38 seconds back, his presence in the move was a threat to the tenth place of Louis Meintjes. As a result the MTN-Qhubeka team chased, with Fabio Aru’s Astana team then taking over approximately 50 kilometres from the line.

Angel Vicioso clipped away in a bid to help Joaquim Rodriguez (Katusha) try to bounce back from losing the race lead on Wednesday. However this was hauled back by Astana with 35 kilometres remaining.

Gautier then played his card shortly before the final climb started.

Attacking amongst the general classification contenders

With 18.9 kilometres left on the clock for the leaders, Fabio Aru (Astana) attacked. Race leader Tom Dumoulin (Giant-Alpecin) immediately marked his wheel, with the other general classification riders following behind.

Those others then eased back, leaving Aru and Dumoulin out front. Rafal Majka (Tinkoff-Saxo) then brought Esteban Chaves (Orica-GreenEdge) and Nairo Quintana (Movistar) back up, with Joaquim Rodriguez and Katusha team-mate Dani Moreno chasing.

Aru attacked immediately again but Dumoulin marked him, appearing to be strong.

The lull allowed Joaquim Rodriguez, Moreno and Alejandro Valverde (Movistar) to return. The latter surged and got a gap. Aru attacked hard in pursuit, and was once again marked by Dumoulin.

Chaves was next to go and rode away. Valverde jumped again in an attempt to bridge, and soon did so. They were just 15 seconds apart at the start of the stage and so the Spaniard wanted to keep tabs on him.

Out front, Roche wanted to push forward for the stage win and surged with just over 17 kilometres left He caught Gautier and built a lead over the others in the break.

Aru tried once again but Dumoulin immediately covered the move. This didn’t deter the Italian, who went once more, again unsuccessfully.

Roche’s Sky team-mate Mikel Nieve attacked and got free, trying to improve his GC position. Although he had a gap, the other riders chased behind and this threatened Roche’s lead. The Irishman was still out front, but had been joined by Zubeldia and together the two worked to consolodate their advantage. They went over the summit 53 seconds clear.

Valverde had attacked repeatedly on the way up; Quintana then took his turn on the descent and got a slight lead, but was hauled back soon afterwards.

Zubeldia and Roche continued racing hard down the descent and with four kilometres left, they were 59 seconds clear and looking good. They hit a slight drag, while behind the GC group was still jumping around at this point.

Aru was momentarily gapped and Dumloulin pushed forward, but things settled down again.

Zubeldia led under the kite, then Roche went through and led from the front. He gradually wound up the sprint and easily held off the Spaniard. Gonclaves was third at 18 seconds, while Valverde took the sprint for fourth, 38 seconds back back.

The general classification was essentially unchanged, with Dumoulin maintaining his three seconds lead over Aru and his one minute 15 second advantage on Rodriguez. Majka, Quintana, Valverde, Quintana and Moreno stay third through to eighth.

Stage 19 brings the riders 185.8 kilometres from Medina del Campo to Ávila and features two classified climbs, namely the category three Alto de Valdavia (km 105) and the category two Alto La Paramera (km 166.7). There is also an uncategorised cobblestone drag up to the finish line, which could catch weaker riders out. 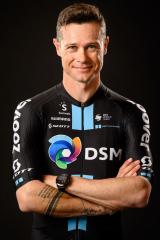