On a day when many expected John Degenkolb to win, Danny van Poppel (Trek Factory Racing) was the one who clocked up victory at the end of stage 12 of the Vuelta a España.

The latter had found himself blocked in during the sprint, something which has happened on more than one occasion in the race.

However there was no taking away from van Poppel’s win, not least because he had to change a wheel inside the final twelve kilometres.

“This was my first chance in this Vuelta,” he said, talking about what is his first Grand Tour stage win. “I missed the opportunities in the first week because I was not feeling good and struggled with the heat, and I was a little bit angry that I missed those chances.

“I knew that today was another chance, and I needed to take responsibility, and we as a team did it – it was a great job together!

“I felt really strong and then I know it’s hard to beat me on a little bit of an uphill. Especially also the guys – when I see the team pulling for me all day that really motivates me; it was really special.”

Rafal Majka (Tinkoff-Saxo) and Esteban Chaves (Orica-GreenEdge) stay fourth and fifth, one minute 28 and one minute 29 behind.

After Wednesday’s gruelling mountain stage in Andorra, the Vuelta continued Thursday with a 173 kilometre race from Escaldes-Engordany to Lleida.

The stage began with gradually descending roads then, approximately 40 kilometres after the drop of the flag, the riders would begin climbing the day’s first categorised ascent. The summit of this second category Coll de Boixols was located 54.3 kilometres of racing, after which there was a mainly downhill run to the line.

While there was one peak 55 kilometres from the end, it was uncategorised and unlikely to pose any real problems.

Missing from the bunch was Tour de France winner Chris Froome (Sky), who withdrew after a fractured bone in his foot was diagnosed via MRI.

However, continuing in the race was the Tinkoff-Saxo team, which relented on a threat to leave the race after organisers promised to take measures to try to avoid a repeat of the motorbike accidents that had taken Peter Sagan and Sergio Paulinho out.

Early on five riders clipped away and were allowed some rope. The quintet were Jaco Venter (MTN-Qhubeka), Alexis Gougeard (Ag2r-La Mondiale), Miguel Ángel Rubiano (Colombia), Bert Jan Lindeman (LottoNL-Jumbo) and Maxime Bouet (Etixx-Quick Step). Together they opened a lead of three minutes and then hung on well over the climb and beyond.

Race leader Fabio Aru’s Astana team initially rode at the front of the bunch but with no threat to his red jersey, it was content for the break to stay out until the finish. This clashed with the ambitions of the sprinters’ teams, and Giant-Alpecin and Trek Factory racing were amongst those riding.

Van Poppel suffered a slow puncture inside the final twelve kilometres but, despite the fast pace up front as the break was being chased down, he was able to get back to the bunch.

The five out front became two when Venter and then Bouet pushed ahead inside the final kilometre. The duo were however overhauled close to the line, with Impey going early and van Poppel managing to get past for the victory.

From the summit of the latter there is a mainly downhill run to the line, potentially setting things up for another big sprint. 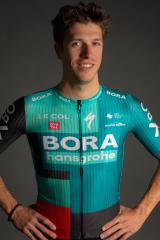